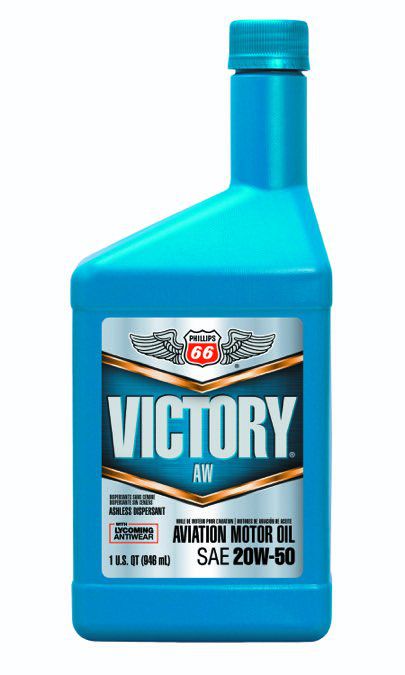 Phillips 66 has announced two new Victory oils, both a straight weight and a multi-viscosity version, with the Lycoming-mandated anti-wear additive already blended in. If you’re required by AD to include the Lycoming additive in your engine, of course, you comply.

But for the rest of us, these oils and the additive in particular may not be such a good deal and it’s often said to avoid them. Phillips also makes claims of reduced oil consumption with multi-viscosity oils that we consider.

Previously only Shell offered a multi-weight oil with the additive already in place. There are sizable difference between this new Victory oil from Phillips 66 and Aeroshell 15W-50 oil. Shell is a semi-synthetic oil, plus the viscosity range is narrower for Victory.

In 1977 Cessna introduced the 172 N model, employing the newly developed O-320-H2AD engine and allowing Cessna and Lycoming’s common parent to save money and offer slightly more horsepower. Unfortunately, the engineering compromises made in the valve train resulted in camshaft lobes and associated lifters that were quite corrosion intolerant. Cost saving led to minimizing the size of the hardened surface, so the contact pressures became extreme. The design was barely adequate, as long as no rust occurred. But any rust increased pressures beyond what the oil could handle, and metal-to-metal contact would occur, rapidly wearing away the valve train components in as little as a few hundred hours.

In addition to counseling owners to fly frequently (which is why the Lycoming H2AD engine did OK at flight schools), Lycoming got the FAA to issue an AD, 80-04-03, now on revision 2, requiring use of a special anti-wear additive. This AD applies both to the 8,331 O-320-H2AD engines included in the 172N and a small handful of O-360-E, LO-360-E, TO-360-E and LTO-360-E engines of similar design included in certain twin-engine aircraft. The anti-wear additive used initially was tricresyl phosphate, TCP. In the presence of water (a byproduct of combustion) and metal surfaces, TCP dissociates to free a phosphate group, which attaches to the lifter surface, providing an anti-wear surface.

TCP occurs in three different molecular configurations, called isomers. In the 1990s, the EPA recognized that one of them was a potent neurotoxin. The commonly available formulations included all three of the isomers, including the neurotoxin. The EPA regulated against it, and most of the industry moved to TPP, triphenyl phosphate (see Chemistry section for differences and discussion).

Harms From TPP In Oil

Not generally recognized in the industry at that time is that TPP dissociates much more readily than TCP, at lower temperatures. This dissociation also frees up phosphoric acid that attacks copper-containing alloys in the engine, notably oil coolers, and certain types of engine seals, like pushrod shroud gaskets. Shell soon received complaints from users of its straight-weight and multi-vis oils that included TPP; oil analysis that had been showing 5-ppm copper suddenly started showing as high as 500-ppm copper, which was naturally concerning. And the engines were leaking oil.

Shell added a copper corrosion inhibitor to the oil, which reduced copper attack. But the phosphoric acid continues to attack seals and even magneto cushions, allowing them to fall into the sump, retarding engine spark timing.

There’s also an issue on Continental engines, which don’t have any requirement for TCP- or TPP-containing oil. But, if someone chooses to add these oils from Shell or Phillips, the phosphate forming on the spring in the starter adapter can allow it to slip, eventually damaging the starter adapter. Interestingly, if everything is perfect-a good-condition starter adapter and a well-charged, high-capacity battery-there will be no starter adapter wear, and the presence of TCP or TPP won’t enter into component dynamics.

But, once the starter adapter begins to wear, the phosphate coating can lead to a spiraling decline in performance, resulting in failure in as few as a dozen starts.

Organic chemistry is the chemistry of carbon-containing materials. One of the staples of organic chemistry, and many of both the drugs and plastics we encounter in everyday life, is the six-carbon benzene ring. The six carbons share electrons, lending interesting properties to compounds containing benzene rings. Each intersection of the ring can attach to yet another molecule or chain of molecules, defining the characteristics of the compound.

To make up the tricresyl phosphate, three cresol groups, of whatever isomer, are attached to a phosphorus atom; the fourth “arm” of the phosphorous atom is attached to an oxygen atom. The three benzene rings make the phosphate soluble in oil, important for our application. When heat and water are applied in the presence of a metal surface (the lifter surface), the phosphorous/oxygen pair separates, attaching to the metal surface, where it helps prevent wear.

When the EPA encouraged industry to move away from cresol in consumer products, the Lycoming-compliant oils were reformulated to use triphenyl phosphate (TPP). TPP is very similar: There’s still a benzene ring bearing a hydroxyl group, but instead of attaching a methyl (CH3) group, there are simply hydrogen atoms attached to the other locations of the benzene ring, aside from the home of the hydroxyl group. Aeroshell and Lycoming went to the butylated version of TPP, which is more active (less hydrolytically and thermally stable). Phillips uses a form of TPP that is even more stable (less active) than TCP, and thus ineffective as an anti-wear, but at least they don’t need copper corrosion control.

As discussed, this formulation was less stable than the TCP, and tended to come apart at lower temperatures, liberating the phosphate (PO, phosphorus-oxygen) group, which would combine with combustion byproduct water in the oil to form phosphoric acid-generally a bad thing.

Interestingly, Exxon took a different tack, convincing the EPA that the synthetic cresyl groups they were using in the late, departed Exxon Elite were much less biotoxic, and so they should be allowed to continue to use them. Instead of attaching methyl groups, Exxon used molecules with chains of two, three or even four methyls strung together at each of the benzene ring locations that typically bear only a methyl group in the original formulation. These longer side chains apparently have the effect of making the molecule less available biologically, and hence less able to cause nerve damage than the original TCP.

Phillips also includes claims of reduced oil consumption with multi-viscosity oils. How could that be? One school of conventional thinking opines that, of course, multi-viscosity oils will be burned more in engines. To understand that thought, let’s look at how multi-vis oils work. Multi-viscosity oils are blended by starting with a single viscosity oil that is typically the lowest viscosity, runniest oil if you will, thinnest at a given temperature. To that runny oil (say 20 weight oil in the Phillips 20-50 example) we’ll add viscosity index improvers, VII. Viscosity index is a measure of how an oil’s viscosity changes with temperature. In an ideal world, you might wish for an oil that doesn’t become thinner as it is warmed … but such oils don’t exist. However, by choosing base oils carefully, and by adding viscosity index improvers, we can formulate oils that thin more slowly than conventional oils. In the case of Phillips 20-50, this means enough VII has been added so that at room temperature and below, the oil acts like a 20-weight, leading to ready flow under cold weather conditions, and rapid establishment of oil pressure on cold weather startup. However, as the oil warms, rather than the oil getting as thin as a 20-weight oil at engine operating temperature of say 200 degrees F, a multi-vis oil thins very slowly, so that at 200 degrees, it’s only as thick as a 50-weight oil would be at that temperature-its temperature viscosity curve is different than normal oils.

So, historically, folks consider that multi-vis oils should be burned a bit more than single-weight oils; when the engine is cold, that thin 20-weight oil will more readily make its way into the combustion chamber, or be misted overboard with crankcase gases. Maybe so, but our engines don’t spend a long time warming up, and typically most of their operating time is at temperatures where the 20-50 should perform just like a 50 weight.

However, remember the VII, the viscosity index improvers. They continue to work at temperatures above average oil operating temperature. And there are lots of places in the engine that are even hotter than the average oil temperature (or we wouldn’t need to average, eh?) Cylinder walls come to mind.

Let’s say the cylinder wall is operating at 300 F. Because of the VII, the 20-50 oil will be thicker on the cylinder wall at 300 degrees F than a straight 50-weight oil would be. The oil consumption performance will depend on the mix of internal temperatures the oil is exposed to, and how much oil resides in each temperature condition, so it’s not surprising that some engines will consume more oil on straight weights, while other engines will consume more oil on multi-vis oils. Phillips hedges their bet: “Reduces oil consumption in most engines.”

Tpp in Oil and Lead Salts

The observant reader (typical of Aviation Consumer) may note that TCP is the same stuff included in Alcor’s TCP lead scavenger additive for gasoline, developed by a former Chevron researcher, the late Al Hundere, decades ago. Will using an *oil* with TCP (or TPP) scavenge lead, thereby sparing one’s spark plugs from lead fouling? TCP Fuel Treatment is 80 percent hydrocarbon (think kind of like gasoline) and 20 percent TCP. The instructions call for adding 1 ounce for every 10 gallons of 100 LL avgas.

Lead oxide often sticks tenaciously to spark plugs. Unfortunately, perhaps, the TCP or TPP in the motor oil is not available in the vapor phase of the combustion process to provide this benefit.

What About Camguard and Other Additives?

None of the above comply with the AD requirement, if you have an O-320-H2AD engine or one of the few afflicted Lycoming 360 models. Camguard does provide anti-corrosion protection, per the results of previous Aviation Consumer evaluations, that may stave off the corrosion failure cascade of the small hardened lifter/cam face interface.

As for pricing, the Victory AW oil sells for around $7 per quart. Consider that both Shell and Phillips offered single-weight oils preblended with the LW-16702 additive. These are priced around $45, which is enough to treat an eight-quart engine sump.

Bottom line: If I owned a Lycoming O-320-H2AD engine, I might use an airworthiness directive compliant oil like Phillips 20W-50, but I’d add Camguard to it to actually protect the lifters. And if I were really motivated, I might request an AMOC (alternative means of compliance) approval from the FAA to use Camguard alone.