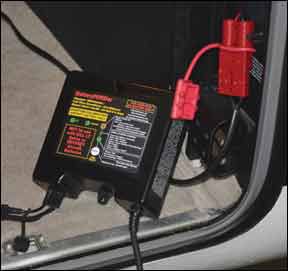 We’ve killed enough healthy batteries to know that external ground power is essential. Whether for use during preflighting, toying with newly installed avionics or updating data and flight plans, aircraft batteries can’t sustain a charge for long. That’s why a portable GPU and a battery charger should be in every maintenance hangar. Enhanced Flight’s next-generation plug-in power supplies do both, while also conditioning a battery for increased life. We put the latest generation model 2870A to the test and it earned its keep in just one work day.

Bring On The Amps
Enhanced Flight is branded by Audio Authority, a company with roots in the mobile electronics industry. They originally designed high-end power supply technology and later brought it to the aircraft GPU market. The improved 2870A portable GPU flows an impressive 70 amps of continuous current—that’s enough to easily power the on-board systems in piston singles up to light jets. It also boasts 89 percent efficiency, with an extremely stable and noise-free DC power stream intended to replicate in-flight electrical environments.

The physical unit is built inside of a durable, portable housing, weighs 33 pounds and is easily carried in one hand. We found the unit convenient to store and easy to set up, with removal storage caddies that house the rugged interface cabling. It also has a strategically placed digital output meter, which we found easy to read at a glance—even in bright sun. The lesser model 2835A outputs 35-amps—still enough current to easily power smaller piston airframes, like a Cirrus or Malibu, for example.

These GPUs are only compatible with 28-volt electrical busses and are  not made for cart-starting turbines. We wondered why the company doesn’t offer a 14-volt flavor, but Audio Authority CEO Jonathan Sisk told us that demand for 14-volt GPU systems is low, especially since most newer aircraft are equipped with 28- volt electrics. Further, power-hungry electrical busses are usually found in more substantial aircraft, including larger pistons and turbines. These are the aircraft that heavily rely on critical battery power for preflighting, running on-board environmental systems and for starting.

Battery Conditioning
The 2870A GPU is more than ground power. It’s also an integral battery conditioner, housing the BatteryMinder, a product made by VDC Electronics. Like so-called battery tenders, the BatteryMinder is designed to gently charge the battery as completely as possible and then continuously maintain it. It also modulates high-frequency pulses to break up and dissolve the naturally forming lead sulfate that builds on the battery plates. Unlike chargers, the BatteryMinder won’t cook a battery—automatically adjusting its output in response to an ambient temperature sensor built into the interface cable. The system is also useful for quick battery top-offs.

An optional airframe interface kit with polarized mating plug allows hardwiring the BatteryMinder for easy plug-in. It’s FAA-approved and is a minor alteration. The 2870A, which has the integral BatteryMinder, is $1445 plus the $59 hardwire kit. The smaller model 2835A is priced at $1045—a good value, in our view.