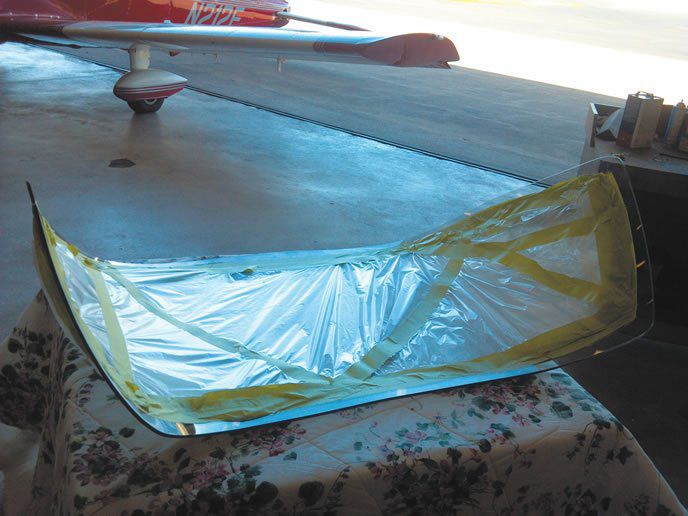 The Plexiglas windshields in our general aviation airplanes are pretty remarkable—made of acrylic, they are lightweight with little distortion, and it should be at least 30 years before you need a new windshield (inset), if treated right. That’s according to John Zofko, Jr., founder of Great Lakes Aero Products, one of the major glass manufacturers. Even on a tie-down, you can figure on 10-15 years, per Scott Utz, head of maintenance at Arapahoe Aero on Denver’s Centennial Airport.

It’s the “if treated right” that is the kicker. Plexiglas is soft and easy to scratch—plus a number of the chemicals that are used for cleaning regular glass can attack the acrylic Plexiglas, notably acetone and ammonia.

While preparing this article, I spoke with Aviation Consumer editor Larry Anglisano and he related an ugly story to me from the time when he was working as an avionics tech. It seems that a customer arrived to pick up his airplane after some work and found the windshield filthy. The shop had a new-hire kid scoot out to clean the windshield. The kid grabbed a can of MEK (methyl ethyl ketone) and a rag and did as he was told. Shortly thereafter, the shop bought the aircraft owner a new windshield as the single application of MEK had ruined the existing one.

Proper care and feeding of an aircraft windshield means assuring that any cleaners to be used are appropriate for Plexiglas—when in doubt, stick with cleaning your windshield with lots of water and your hand (the one that doesn’t have a ring on it). Aircraft detailer Ed Pataky told us that he’s not found anything better than plain old water, and lots of it—to soak the bug splats—for getting a windshield clean. Especially if the airplane has been sitting and a layer of dirt has built up on the Plexiglas, flooding it with water will let the dirt and grit simply run off without causing scratching. He also warned against using paper towels as they can scratch Plexiglas and to absolutely stay away from shop rags as they are notorious for having grit and metal particles in them, despite having been washed. It’s best to use a clean, soft cotton or microfiber cloth.

The manufacturers I spoke with recommended mild dish soap mixed with water and rubbing the window with one’s bare hand as the best method. If a cloth is used, it should be soft and non-abrasive. 3M cleaning products were spoken of positively.

I haven’t seen any data as to whether the thin coating left on the Plexiglas by a rain repellent product also helps protect the acrylic—but I tend to think of it like chicken soup; it can’t hurt.