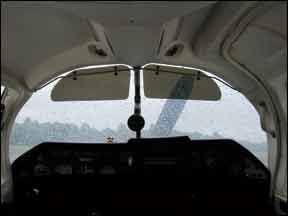 Single-engine airplanes don’t have windshield wipers and neither do a lot of twins. While it’s true that prop and airblast blows the water off, that process can use a little help and that’s where windshield cleaners and polishes come in.

There are literally many dozens if not hundreds of these products, some intended for glass, some for plastic and some both. To keep this inquiry under control, we’re testing only those cleaners that claim some degree of rain repellency, on the theory that if you’re going to clean your windshield, you might as well do it with something that makes it easier to see through when it’s raining. This is especially helpful at night when taxiing to and from runways.

A few aircraft windshields are made of glass, but generally only those found in pressurized airplanes or with heated windshields. The vast majority are made of cellcast acrylic plastic, which is cast in sheets and thermoformed to shape. Acrylic is tough stuff and capable of resisting some stiff whacks of the sort a bird strike can deliver. It’s also resistant to damage from many chemicals, but certainly not all chemicals, which is why so many cleaners and polishes are formulated specifically for acrylics.

To some degree, all of these products contain silicone or wax materials that do the sealing, forming a slick layer that’s supposed to repel water and in some cases snow and frost. Some are just polishes and some are combination cleaners and polishes.

To test these materials, weprepreprepared a new acrylic sheet for each one, soiled it with crankcase oil and dirt and used the cleaner as directed. For bug removal, we used the products on a motorcycle fairing after it had been run 200 miles through the Everglades at night. (Yuck.)

Rain-X
The best-known rain repellent is Rain-X, an automotive product intended for glass, not plastic. Although owners use it on aircraft windshields with good effect, it’s not recommended for plastic, according to the company that now makes it, ITW Brands.

Spokesperson Lauren Raymond told us that Rain-X contains ethanol, acetone and isopropyl alcohol, plus silicone and perhaps other materials.

The major no-no here is acetone, which degrades acrylic by fogging or softening it. However, Raymond told us not all plastics are affected, which may explain why owners who use the stuff seem to get good results.

On our test panels, Rain-X did okay getting the oily mess cleaned up, but it was less impressive with bug removal. Despite its high solvency, it took effort to dislodge the baked-on critters. Its water repellency is good, but not the best. We also tried Rain-X Extreme Clean, which is intended for plastic. It works well with bugs, but claims (and offers) little rain repellency. Rain-X costs $4.98 for a 3.5-ounce bottle.

Rain Away
Rain Away ($5.95 for 4 ounces) claims to be produced for aircraft use and is thus safe for plastic. It smells a bit like Rain-X, which is explained by the fact that it contains isopropyl alcohol, but no acetone. It’s applied similarly: rubbed on and allowed to form a haze, then wiped off. In performance, it’s quite similar to Rain-X in removing the oily mess from our sample panels. Ditto with the bugs. It will get them off, but it takes work. Water repellency is similar to Rain-X.

210 Plus
This product bills itself as a cleaner, polish and scratch remover. It’s a paste-type material that’s runny enough to dispense through a small nozzle. In general, the paste-type materials are a little messier to use than the water-clear solvent products. You’ll need two clean, dry rags to complete the job. 210 Plus did a good job on the cleanup, but its rain repellency is only so-so, in our view. It sells for $11.75 for 15 ounces.

Plexiclear
This is a Cessna-branded product made under contract by Jetstream and retails for $9.95 in a 16-ounce spray bottle, making it one of the better values on volume alone.

It’s intended specifically for aircraft windows and is a blend of ethanol and other components not named on the product’s Material Safety Data Sheet. It claims to be both a cleaner and polish capable of producing a “microscopic, high luster soil retarding and water repellent finish.”

Does it? It seems to. It’s available in both spray bottle and aerosol and we like one thing about it: You wet the surface first, then apply your rag or microfiber cloth. This reduces the risk of scratching. Plexiclear worked well on bugs and had good water repellency, although not the best.

All Kleer
This is another paste-type material, although it’s more the consistency of milk than paste wax. Like Rain Away, it contains isopropyl alcohol as a primary ingredient and it smells like it.

Of all the products we tried, this one seemed to float the bugs away the best. A few wipes and the smats were gone; a little polishing gave a smooth, hard finish. Rain repellency was good, making this one of our top picks. Price is $6.95 for 8 ounces.

LP Acrylic Polish/Sealant
This stuff isn’t really a cleaner, but a polish, and the instructions recommend cleaning first with something else. That can be plain water and a clean rag. If the windshield isn’t gritty or too soiled, this material can act as a combination cleaner and polish. It did pry loose the bugs, but not as well as All Kleer did, probably because it lacks a solvent.

But what it lacks in cleaning power, it more than makes up for in a slick, rain-resistant surface. We noticed this immediately as we were polishing our test pieces. Its rain repellency is the best of all the products, in our view. It sells for $15.75 for a 16-ounce bottle.

Raincoat Spray
This is a wax-type material intended only as a rain repellent. It’s too waxy to work as a cleaner, so it requires a clean substrate to begin with. Application is a bit labor intensive, requiring some elbow grease to polish.

It leaves behind a smooth, hard protective layer, but not quite as smooth as the LP product. Its water repellency is good, about like Rain-X. At $14.85 for 4 ounces, it’s the most expensive of the products tried.

Conclusion
You won’t go wrong with any of these products. Although our tests have never revealed any visible damage from Rain-X, aircraft windshields are too expensive to take the chance, especially when other products perform better. Our top picks are LP’s Acrylic Polish and Sealant whose water repellency  was excellent and All Kleer, which did well removing bugs, leaving behind a moderately effective rain-repellent surface.

We liked Plexiclear as a heavy lifter cleaner to keep around the hangar when you return with a truly filthy and bug-spattered mess. Wetting the surface with this stuff makes quick work of it.