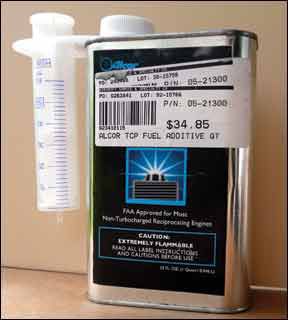 After a long period of difficulty obtaining it, TCP has come back on the market in volume and that’s a good thing, especially if you own an engine that’s susceptible to lead fouling of plugs.

Using TCP is simple. It employs a syringe and fluid can arrangement, where TCP is squirted into the aircraft fuel tank at fill-up. One ounce treats 10 gallons, so it adds less than 10 cents a gallon to fuel cost. (A quart of TCP is $35.)

If aircraft engines were all in perfect tune, optimally engineered and professionally flown, perhaps TCP would not be so necessary, but this isn’t the case. Moreover, there clearly is extensive owner feedback that certain engines seem more prone to spark plug fouling than others. The Lycoming O-540 in the Cherokee Six comes readily to mind, as does the O-235 used in the Cessna 152.

Inefficient induction systems is why you see the sometimes odd distribution of lead fouling in some engines. Leaded avgas has a potent toxic lead-scavenging compound called ethylene dibromide. In spite of this chemical agent, the tip temperature of the spark plug needs to be in excess of 800 degrees F for the lead scavenger to begin working. Closed throttle idling doesn’t normally heat the plugs to this degree, thus promoting deposits.

Further complicating the problems is that tetraethyl lead and ethylene dibromide scavenger chemicals in fuel do not necessarily atomize in the proper proportions from cylinder to cylinder, especially with carbureted engines. It’s common for these critical additives to be disproportional among cylinders.

This occurs because of the differences in volatility of these two chemical additives coupled with inefficient (old and simple) induction designs. That’s why a multi-point EGT often shows 150 degree-plus EGT differences, even in cruise.

Because of the relatively wide variance in the boiling point of these additives in leaded fuel, fractionalization occurs in the induction system. While the ethylene dibromide tends to atomize more evenly, the tetraethyl lead may be badly distributed, resulting in lead fouling in only a few cylinders—or all cylinders in varying degrees if plug tip temperatures are under 800 degrees F. (How the engine is leaned in flight can also contribute to fouling plugs.)

Regular doses of TCP can all but eliminate these problems and is probably worth the minor expense for those engines that need it. Just one fouled plug will require more than $35 worth of effort to clear.

Other things you can do will help with deposits, too. Increasing ground idle RPM a bit and leaning helps. So does raising the temperature of the induction air through judicious carb heat use to promote better atomization. Don’t do it on the ground, though, because unfiltered air will enter the induction system. A carb temp gauge can help with this. You don’t want to solve one problem and create another—unrecognized carb ice.

Even fuel-injected engines aren’t immune from fouling due to primitive induction designs. Again, manual leaning on the ground is helpful. It promotes atomization and higher plug tip temperatures.

Why not add more lead scavenger agent to the fuel? The three reasons are cost, corrosiveness and toxicity.

TCP is a little less effective than ethylene dibromide, but much less toxic. If you have chronic lead fouling and other remedies mentioned above aren’t helping, TCP is worth a try. However, because of its flammability, it’s not supposed to be carried aboard the airplane. For more, see www.alcorinc.com, or call 800-354-7233.

MultiSump Fuel Tester
Fuel samples seems to come and go like the weather. The old standbys remain the cup-and-pin model and the ever-popular test-tube sampler with a screwdriver bit at one end. Wilbur and Orville probably had one.

If the conventional wheel is too boring, now comes a new fuel testing gadget call the MultiSump. This one actually solves that slight problem that many of us have: At an increasing number of airports, it’s illegal to pour the sumped fuel on the ramp. (And why would you anyway, with fuel at $6 a gallon.)

As is obvious in the photos—well, maybe not entirely—the Multi-Sump consists of a cup-and-pin type sampler inside a larger container about the size of a medium tumbler. The smaller cup is mounted on a spring stalk inside the larger container.

The idea is that you sample the fuel into the smaller cup, inspect it, then tilt the small cup to drain the sample into the larger cup. Continue with the sampling and when you’re done, pour the sampled fuel back into the tanks.

To avoid pouring contaminants, including water, back into the tank, the removable base of the Multi-Sump slides off and acts as a funnel that also has a micron filter. (We noticed even with what appeared to be clean fuel, the filter caught some small black bits we didn’t notice in the cup.

FuelTape
For some reason, misfueling doesn’t seem to happen as much as it once did. We’re not sure why, but FBO insurers may have something to do with it. Nonetheless, it does occur and if it happens to you, consider yourself lucky if you notice it before you start the engine.

A product called FuelTape aims to help. It’s nothing more than adhesive tape labeled with 100LL or Jet A. Place it over the fuel cap and, hopefully, the line guy will notice it.

We tried the product on a Cherokee and we’ll say this: It sticks like crazy, so much so that we would be cautious about applying it with too much pressure. A light touch will do to hold it on against the wind or wet weather.

The better guard against misfueling is to stand by the airplane while it’s being fueled. But sometimes, you can’t, in which case FuelTape might help. It’s $7.25 per roll from Aircraft Spruce and Specialty at www.aircraftspruce.com.