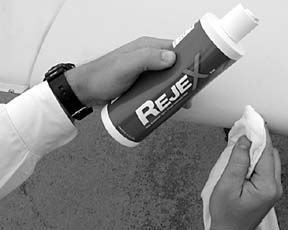 Sunlight and moisture spell slow doom for aircraft paint but what really gets most owners’ attention is bug splats and exhaust stains. These tarnish even a factory-fresh paint job in mere hours and they cause just as much damage to the paint, albeit in more limited areas.

Regular waxing seems to help with both but who has time to wax an airplane five or six times a year? You’d think someone would come up with some chemical goo that would cause bugs and exhaust to slough off. Evidently, someone has.

We recently field tested a relatively new product called RejeX that claims to protect finishes of all kinds from bug, exhaust and oil damage.

And while it doesn’t quite cause these insults to the finish to slough off without a trace, it makes stains easier to remove and leaves a much smoother, impervious surface.

What Is It?
RejeX is a surface treatment developed by Corrosion Technologies Corp., the same company responsible for the CorrosionX anti-corrosion system that we’ve recommended in previous reports. According to Corrosion Technologies, RejeX is an “advanced polymer treatment” that’s neither a wax nor a polish but a sealant that protects underlying surfaces.

If these claims sound like Billy Mays flogging Kaboom on cable channel 96, we’ll admit there’s a resemblance. On the other hand, RejeX seems to work, both in our trials on airplanes and, more significantly, in the demanding world of military aircraft and vehicles where picky gunnery sergeants expect turbine exhaust tracks to pass white glove inspections.

Actually, RejeX owes its creation to military specs. For the military, exhaust stains on airframes are more than just a nuisance, but also a primary source of airframe corrosion and the stain disrupts the effectiveness of camouflage paint schemes.

While we fly around in shiny Bonanzas, the military uses flat or matt camo paint which makes it all the more difficult to remove bugs, surface contaminants and exhaust stains.

When maintenance officers from the Air Force and Army approached Corrosion Technologies’ Jim VanGilder with this problem, he was familiar with their needs, since many units use CorrosionX for corrosion protection of airframes and equipment.

Reasoning that a surface protectant could also find a civil market, VanGilder funded a study and directed his lab researchers to explore a treatment that could enhance the protection offered by paint. The result is a material more like polish than a traditional oil-based anti-corrosion compound, such as CorrosionX, Boeshield T-9 or ACF-50, all of which are fogged for application.

RejeX is applied (usually by hand) out of a bottle but it takes no elbow grease to either wipe the stuff on or wipe the final haze off. It’s best thought of as a sealant that closes up minute pores in the finish so bugs, oil, grease and exhaust have less “tooth” to gain purchase. RejeX claims to form a long-lasting, glass-like barrier that prevents damage to paint from continuous exposure to exhaust gases and particulates.

How It Works
We checked with military users of RejeX and did our own testing. We were told that the Air Force conducted field tests of the product on freshly painted Black Hawk helicopters and C-130 turboprop transports. They treated one exhaust side with RejeX and the other with their old standby, a protective chemical product called AC-3.

Photos taken after months of flying with repeated washings show that exhaust stains wash off readily from the areas treated with RejeX, rather then needing to be removed chemically with lots of scrubbing and rinsing.

We were also shown photos and obtained first hand field reports demonstrating there was no visible damage from the exhaust to the RejeX protected side, while unprotected surfaces are stained and occasionally pitted. RejeX doesn’t have any abrasives, so it won’t restore or buff up the shine of aged paint in the way that some polishes will. But it will increase the refractive abilities of nearly all types and colors of paint. Blacks will look blacker and colors will look noticeably deeper.

In most cases, we found that bug splats wipe off with a damp cloth or even a quick swipe of the hand. There’s no need for tedious scrubbing or to resort to oven cleaner or other trick solutions.

Flight Trials
We treated a Mooney’s leading edges with RejeX and found that it made the miserable Florida Love Bug season more tolerable. Yes, the bugs still die in place and have to be removed. But the task is far easier on a RejeX-treated surface.

Because of turbocharging and oil blowby issues, some airplanes have chronically stained bellies. Again, RejeX doesn’t prevent the staining but makes removing it a three-minute effort rather than a 20-minute effort. Our impression is that it doesn’t reduce either the size of staining or the speed at which it accumulates.

And how about windshields? We’ve argued the pros and cons of Lemon Pledge, Windex, Rain-X and other products in terms of suitability for acrylic aircraft windows. For the record, anything with ammonia in it – that’s Windex – should be avoided, as it will cause fogging of acrylics. Rain-X is suitable for plastic and was indeed developed for this purpose.

Corrosion Technologies’ VanGilder told us that RejeX is safe for acrylic plastic and, like Rain-X, it creates a hydrophobic surface, causing water to bead and run off, thus improving visibility through the windshield.

This is especially helpful when taxiing in twins which have no windshield wiper. Water beads and runs off rather than sheeting and reducing visibility. As far as retreatment, we found that applying RejeX every four to six months seems to work. Difficult spots – areas right in line with exhaust stacks – may require more frequent treatment. We don’t have enough test data to venture a guess.

You can buy RejeX online directly from Corrosion Technologies for $19.95 for a 16-ounce bottle. For leading edge, exhaust and belly protection, that’s easily a year’s supply.

If you’re doing a larger airplane or a fleet, RejeX can be bought in gallon bottles for $144.95. Contact Corrosion Technologies at www.corrosionx.com or by phone at 800-638-7361.

Also With This Article
Click here to view the RejeX Checklist.