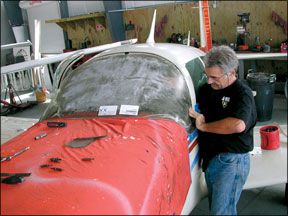 ead in a blog the other day that discarded plastic bags in a landfill are thought to last 500 years before degrading. With that useless bit of trivia in mind, we would be thrilled if an aircraft windshield-also plastic, mind you-would last a tenth as long. Actually, they probably do last that long, its just that you cant see out of them any longer. For that reason, theres a lively business in the aircraft replacement glass market. We call it “glass,” by the way, as a term of art. Apart from a few exceptions on larger aircraft with heated windshields, all of the windows

in light airplanes are made of plastic, specifically cast acrylic commonly called by the trade name Plexiglas, although not all manufacturers of aircraft windows use Plexiglas. In fact, a material called Spartech (formerly Polycast) seems to be the favored product.

Although its practically indestructible, there are good reasons to replace windows in older airplanes, not the least of which is safety. But perhaps not for the safety reason you think. As part of the inevitable march of progress, aftermarket companies have produced improved windshields and side windows that are thicker than the OEM originals. For example, in our Mooney, the factory installed a 3/16-inch (.187 inch) thick windshield and we recently replaced it with 1/4-inch thick version. In other models, even thicker windshields are available. The payoff? Better bird strike protection, although the suppliers of aftermarket windshields dont make tall claims about this.

“Its common sense that a thicker windshield is stronger, but I couldnt and wouldnt put any numbers on it,” says LP Aeros Jeff Pfister, whom we visited during

a factory tour last spring. Sales figures are hard to come by, but we think LP is the market leader in aircraft acrylic products. But other companies, notably Great Lakes Aero Products, Beryl DShannon and Cee Bailey offer windshield and window products, if in limited product lines. LP seems to have the greatest variety.

Two others reasons to upgrade: cabin sound deadening and improved visibility out the windows, which is never a bad thing. See the sidebar below for our testing of a thicker windshield for our Mooney 231. As for seeing better, a 30-year-old windshield will inevitably shows signs of age in the form of milkiness, minor or major crazing and microscratching. In most lighting conditions, this might be hardly noticeable, but at night, in low weather or flying into low sun conditions, a compromised windshield can make the difference between seeing a hazard and not seeing it. Replacing a windshield will also involve resealing it, fixing leaks that can cause festering corrosion.

Not much has changed in aircraft window material since we examined the subject a decade ago. However, during our visit, Pfister explained that LP is just introducing a new acrylic product called SC acrylic that blocks 100 percent of all UV light and 50 percent of lower frequency infrared. If this material performs as expected, it may significantly reduce UV-induced wear and tear on upholstery and with less infrared infusion, the cabin may stay a little cooler on a sunny day. Pfister told us

SC acrylic is still new, so its actual performance is unknown.

We upgraded our windshield when the aircraft was repainted, which makes sense, since some trim has to be drilled or replaced and may have to be repainted. This will vary by aircraft type, as will the overall cost of the job. For our airplane, the labor cost five times as much as the windshield itself. We think any owner whos doing the full Monty-replacing all the glass in the airplane-ought to budget between $2500 and $4000 for a non-pressurized single or light twin. On some airplanes, owners may be able to do some or all of the work themselves, with supervision and sign off. Side windows are generally easier to remove and replace than windshields. (Our shop learned this the hard way. Despite having done hundreds of windshields, it broke a factory-fresh LP on the first try.)

As in automotive windshields, next to keeping the wind and weather out, the big thing a windshield has to do is provide a distortion-free view of the world outside. For that reason, LP and other windshield makers start with the most uniform plastic sheetstock they can find, which is cellcast acrylic. As the name implies, cellcast sheets are cast from liquid polymethyl methacrylate (PMMA) resin poured between cooled glass sheets which form a cell. The process yields a dimensionally accurate

and optically undistorted sheet which the windshield maker can then form into the appropriate shape. Cellcasting has another advantage over the cheaper method of extruding plastic sheets: It doesnt cause “mark-off,” small processing related imperfections that youd notice when peering at the world over the nose.

From years in the business, LP has accumulated patterns for just about everything flying and for those it doesnt have, it can make new parts from the old ones or from drawings. Each windshield is carved out of flat sheetstock with a router guided by a plywood pattern, of which LP has hundreds.

From there, the flat sheet is taken into a closet-sized oven where its heated to its forming temperature-about 350 degrees F-and removed for shaping. The day we visited LP, a half dozen sheets hung suspended in slide-in racks from the ceiling of the ovens, soft as wet noodles and blazing hot. To shape the windshields, workers remove the hot plastic blanks and-working quickly-force or draw them around three-dimensional fiberglass, wood or metal molds in the shape of the windshield to be made. The plastic is protected against mark-off by a layer of fabric between the mold and the hot material. Some windshields are a one-man job but others, the Cessna 172, for example, which Pfister calls a nightmare to shape, require two or three workers pushing, tapping and coaxing the plastic before it cools.

And this introduces the windshield makers persistent demon: optical distortion. Any curved plastic piece will have some distortion; its unavoidable. But if distortion is too great, pilots will notice it, especially at the quicker bends. LP optically inspects every windshield it produces, looking for unacceptable distortion in a final eye-of-the-beholder check before the windshield is trimmed and shipped. A windshield that fails inspection is sent back to the oven, reduced to a hot wet noodle and reshaped.

As shown in the chart at left, prices on windshields and windows are competitive and, on some products, differences are quite substantial. Great Lakes Aero enjoys a slight price advantage over LP, but LP has greater variety and is better geared to take on custom work. DShannon is really a specialty shop dealing in Beechcraft products, but it offers extensive conversion kits for the Bonanza-the so-called speed slope windshield-that the other companies dont sell.

LP and Great Lakes both hold a number of STCs or PMAs permitting them to offer windshields thicker than the OEM original. Cee Bailey, on the other hand, sells only windshields in the same thickness as the factory part. Given the choice, we thought any owner would opt for the thicker windshield when upgrading.

“Yes and no,” says Great Lakes Aeros Troy Gallagher. “Some people dont want the extra weight of a thicker windshield.” How much weight are we talking about? Not much. Upgrading from a .187 to a .250 windshield will amount to less than three pounds for most aircraft; bumping up to .375, a couple of pounds more.

Of all the shops we interviewed, LP is the most capable of doing custom work and is willing to take it on for reasonable prices. When we visited, the company was producing some canopies for Experimental aircraft and in the past, it has reproduced windows and windshields for military aircraft long out of production.

For those really stuck for parts, LP will work with owners and the FAA to produce owner-provided parts and theyll offer advice on how to grease the approval wheels. For a shop or owner having trouble getting the windshield to fit, LP can even help with that. You ship them the old windshield and theyll trim the new one to exactly the right size, meaning it should drop easily into place with no fussing for fuming.