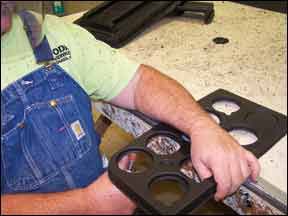 Like bargain wine and crotchety magazine editors, plastic gets touchy with age. Sunlight is the biggest enemy, but even tucked in a climatecontroller hanger, the compounds that give plastic its flexibility outgas, leaving the remaining material prone to cracking or shattering from a stress it would have sloughed off 10 years prior.

non-aviation part, and plastic interior pieces are no different. The small redeeming point with interior plastic is that parts for the majority of GA aircraft can still be had, and that you can save a bit by doing the installation yourself, if youre so inclined.

Bobby Cook, Parts Manager for Cessna Aircraft Parts told us, “We dont sell a ton of plastic. We used to sell more, but these days everyone is tightening up their dollar.” Its logical that non-essential items like a crack in the left seatback would be one of the first things to get hacked from the aircraft repair budget. Cook admitted, however, that this drop in sales may also be from more business going to suppliers of non-OEM parts, looking for a better price.

The price delta between OEM and non-OEM sources is huge-commonly over 50 percent. Parts resellers like Cessna Aircraft Parts buy from the OEMs. The advantage is the parts are usually a perfect fit and are at least as good as the original.

We say at least because any newly manufactured part must meet the current structure and burn standards. Plastic technology has improved in the past 30 years. That said, formulations for UV protection and fire retardancy are somewhat at cross purposes, so the new part may not outlast the original if its an antique.

All plastic parts have to be cleaned up after casting and Cook says some aftermarket parts fall short here. “Some [buyers] have come back to us and bought

the original plastic because you have to cut the [aftermarket] plastic.”

OEM parts are usually made in large batches, so delivery time can be days for stuff thats in stock or months for items waiting for the next production run. The latter seems the exception rather than the rule. Cessna parts are widely available. Mac Little of Piper Parts Plus told us that Piper and Cirrus are also good about turnaround time on interior parts.

What are the tough items to find? “Old doors,” says Cook. These panels take regular abuse from kicks and bangs during normal use and can be specific in some detail to as few as 70 serial numbers. When ordering a part where there is a lot of variability, youll want not only the part number but also the year and serial number of your aircraft.

One source for tough-to-find parts is Preferred Airparts. They buy surplus OEM inventory, as well as part out used aircraft. The ordering paradigm is a bit different from Preferred in that they dont publish prices. Instead, you request a quote for the parts you want. “We usually give 40 percent off the list price,” says Dale Miller, Marketing Manager for Preferred.

Preferred maintains a large inventory extending back to piston singles built in the 40s and up through modern turboprops and jets. The stock is primary Cessna, with some Piper and others. “We have what we have,” says Miller. “But we might have something youre looking for tomorrow or in a year.” Miller sees common requests for window trim and headliners for twins and, of course, those door panels. Having

access to used inventory doesnt help much, as those door panels tend to be cracked already.

The least expensive route is aftermarket, and the 800-pound gorilla in that arena is Vantage Plane Plastics. This price spread follows a predictable variance across many makes and models. For example, the rear seatback for a Cessna 172M lists for $470, can be had from OEM resellers for $376, is available as surplus OEM (from Preferred Airparts) for $268 and can be bought from Plane Plastics or its resellers for $164.82.

These aftermarket parts are still usually a PMAd direct replacement with all the documentation. Plane Plastics has over 3500 PMAs for parts and continues to add them.

They also have non-PMAd parts they can sell, but with some restrictions. The aircraft must have been type certificated before 1981 and you must send Plane Plastics the original part so they have it in house. They can then send you a replacement as a custom-made part. Non-PMAd parts for non-structural applications were common before the mid 90s. Then fallout from some events in the jet engine market let to a serious tightening of the regulations on this practice.

Plane Plastics has an online catalog thats easy to browse and covers a wide range of aircraft, including less prevalent makes such as Grumman, Mooney and Commander. They also have many helicopter interior parts. The company is branching out into exterior plastic parts, although none are PMAd yet.

Plane Plastics installation manager, J.D. Casteel, told us the company is more than

happy to look into building a part they dont have in stock if theres been enough demand. But there has to be real demand. The tooling cost to start with a customer-supplied part and create the forms for replication is about $10,000.

Plane Plastics is the biggest shop making new plastic interior parts, but they arent the only one. Bob Atkins is the owner of both a Piper Cherokee and Plane Parts, which specializes in Piper interior plastic. Their catalog isnt extensive, but it hits the most commonly requested pieces from PA-28, -32, -34 and -44s.

Atkins background is in classic
cars and he was appalled by the OEM cost of some parts when he went to order them. “Forty dollars for a vent cover? A part thats sitting on the floor where someone will step on it? What are they smoking?” Atkins says one of his mandates is selling parts at a reasonable cost.

Plane Parts tries to get the part as close to the original as possible, but is willing to improve it in small ways if they dont interfere with fit and function. “Many of the original parts were not that well made,” says Atkins. Thickness and finish were often uneven. Pipers original overhead consoles screwed in through a thin plastic edge that readily cracked. The Plane Parts version is just a bit thicker.

than paint and doesnt dull the plastic finish.

If you cant find the plastic part you need, you might be able to repair what youve got. Casteel of Plane Plastics told us a surprise seller has been their new plastic repair kit. This is the same formula they use in-house to build parts assembled from multiple plastic pieces.

The $12.49 kit is available in white, beige or black, but it arrives missing one key ingredient: methyl ethyl ketone (MEK). Theres a hazmat issue associated with shipping MEK, so youll have to get some of that on your own. A quart from Aircraft Spruce is $11.65.

Fixing a crack is only delaying the inevitable, however, because the old plastic is likely to crack again.

Sometimes theres just no good remedy for getting old.