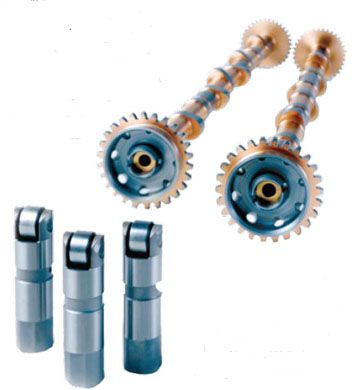 See, new technology does come to aircraft engines from time to time. Sure, it may be new as in new to the breed or new for this manufacturer, but the fact remains that both major piston-engine manufacturers are in a reinvigorated push to improve product. From Lycoming, introduction of roller tipped cam followers (or lifters) has become a battle cry in this push toward modernity. The company announced in 2004 that it would work with automotive supplier Delphi to develop the lifters, and had introduced them to the Experimental market by the summer of 2005 in select engines.

At press time, Lycoming had begun delivering new engines with the devices and had announced plans to phase in roller lifters to factory overhauled and remanufactured engines. (Its not a bolt-in affair, as well soon see; the cases need to be exchanged or, at least, modified to take the new parts.) For the moment, Lycoming’s roller lifters as well as Superior Air Parts’ similar products are largely for Experimentals. But this technology is becoming an option for owners of production airplanes.

PARTS ARE PARTS
Roller lifters are nothing new in automotive circles and in fact are old hat in aircraft engines. Radials, whose valves are actuated by a massive cam ring encircling but riding outboard of the crankshaft, have used roller followers since the 1920s. Just what are we talking about? Remember your Engine 101 classes: The camshaft carries a series of egg-shaped lumps that, through a long string of parts, eventually open the intake and exhaust valves. The first component in the line after the camshaft is called the follower or lifter.

For conventional flat aircraft engines, the lifter is a chilled-iron cylinder that rides in bores cast into the crankcase along the spine. As the follower rides up on the cam lobe, it moves outboard, chasing it with the pushrod, which then acts through rocker arms at the tops of the cylinders that open the valves.

Inside the lifter, for most engines, is something called the hydraulic unit, which uses engine oil pressure to maintain a minimum amount of clearance in the entire valve train. Virtually all large engines have hydraulic followers; only the small Lycomings retain solid lifters.

The face of the lifter where it meets the cam appears to be flat. Actually, its machined in such a way as to help the lifter spin in the bore and to spread the contact loads. Nevertheless, the cam lobe generally swipes across the face of the lifter during operation, protected by a thin film of oil.

Roller lifters replace this flat-faced part with a small steel wheel riding in needle bearings. It naturally wants to ride up over the cam lobes with greater ease and less sliding friction. In fact, this reduced friction is the primary reason roller lifters have been implemented in automobiles.

Theyre an outgrowth of the racing industry, which is always trying to get cams with a lot of lift and aggressive ramps to work well at high RPM. The roller lifter has made wild cams possible even in street machines because with a flat tappet, a very aggressive ramp could make contact beyond the edge of the lifter, with dire consequences.

But its the friction reduction that has driven this train; the typical automobile needs around 20 HP to achieve highway speeds. If you could magically cut even half a horsepower in friction, the potential economy gains are worth the effort. So far, so good and for low-rev applications like an aircraft engine living in a perfect world of frequent use, low humidity and on-the-dime oil changes, there are few compelling reasons to adopt roller technology that primarily benefits internal drag numbers.

However-and this is a big one-the reality is that both Continental and Lycoming engines are affected by something called lifter spalling. And while hangar lore says that Lycomings are more likely to experience this, our sources in the field say there are just as many cases of spalled lifters in Continentals and some suggest that a combination of different fuel components and reduced activity are at the heart of the matter.

Whats spalling? Heres the scenario. Youd like to fly more but dont. After you shut down the engine, it cools and humidity goes up. See our report in the September issue for just how much it goes up. Moisture on the cam and lifter faces can lead to surface corrosion in the absence of a protective barrier such as an oil film.

Corrosion is notoriously hard and persistent, so the next time you start the engine, its like rubbing sandpaper between the cam lobes and the lifter heel. Soon enough, the cam begins to leave some of its material on the lifter face. Left unheeded long enough, spalling can wipe the lobes right off the cam, reducing performance and depositing metal throughout the engine. Historically, high-camshaft Lycomings have suffered the most and the popular theory is that the cam location means that any lubricating oil drains off the cam after a short time. In low-cam Continentals, oil seeps and drips from the crankshaft for a little bit longer. However, one prominent engine overhauler says thats bunk.

Nonsense, he says. The crank throws all sorts of oil around. The top of the case inside has oil slung all over it. Plus, of course, the cam has pressure lubrication all its own, so its not like the cam is running dry.

THE ROLLER ADVANTAGE
Now we get to what most engine builders feel is the primary (theoretical) benefit of roller lifters. Because the roller ball rides over the camshaft rather than being scraped along the face of the lobes, the potential for camborne corrosion to wreak havoc on the lifter is greatly reduced. Notice that we didnt say eliminated, because corrosion can still take hold; but the worst part of the typical cam-spalling scenario, that wiping motion, has been designed around.

Lycoming and Superior, whose new parent company Thielert did the development of its roller lifters, tout other benefits of the roller lifter including reduced operating friction, the ability to use different cam profiles than is possible with flat-bottomed lifters, and reduced valve train shock loads. Extrapolating from that, Lycoming has claimed improved efficiency and reduced vibration.

Lets take a closer look at a couple of those claims. One is friction. Its true that a wheel supported by needle bearings will roll over the cam lobes with less effort than sliding a flat lifter across the face. But how much more efficiently? Even if you could reduce the cam/lifters friction by 50 percent, what would that mean to the rest of the engine? We asked around and didnt get any firm answers. But its likely to be in the low single-digit percentage range, according to our sources.

How about performance? In Experimentals, roller-tappet engines dont appear to be making better max-power numbers and the variability from engine to engine-in compression ratio, ignition timing and type, induction systems-has made a one-to-one comparison difficult.

Its possible that the claimed improvements in mid-range efficiency are there, but the field is notably silent of pilots standing up saying what great mileage theyre getting. And while Superior says its roller-cam profiles are different than the standard Lycoming grind, one shop has put Lycomings roller cam on a Cam Doctor. The result? Lift, timing, duration and overlap are all close to the standard lifters specs-taking into account actual valve movement. A roller cam will have a physically different shape because of the geometry difference between the roller and flat lifters.

OUT HERE IN THE FIELD
So far, its early days with the roller tappets. Mattitucks Michael Yousik says, We really dont have any feedback yet. Weve made 50 Experimental engines with the roller tappets but havent heard anything. Its the same story from Barrett Precision Engines. According to founder Monty Barrett, Weve built several engines but havent had any back through the shop, so I cant say how theyre working out there. Asked if hes seen any power difference on the dyno, Barrett says, Nope.

At press time, the roller tappets were for Experimental and new-OEM engines only because Lycoming had yet to produce service instructions for fitting the devices in the field or modifying existing engines for them. The lifters require different cases, says Barrett. We could machine existing cases for Experimentals, but we dont have any paperwork allowing us to do that on overhauls [for production aircraft].

RECOMMENDATIONS
As with any new engine technology, its hard to come out firmly for or against until theres reasonable field experience. We know that Lycoming (through Delphi) has tested the system thoroughly but theres no replacement for putting a new technology in the hands of pilots and owners. Reputable engine builders are enthusiastic about roller lifters and for now that may have to stand as the next best thing to an endorsement.

But there is always a potential risk with new technologies like this. In aviation, they arent tested nearly as much as they are in the automotive field, so long term field could tun up some warts. Well be watching roller lifter field performance carefully.