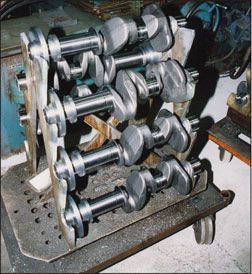 Owners of Lycoming engines winced collectively in late February as they received notification that the company was asking 5100 of them to retire crankshafts in four-, six- and eight-cylinder engines. The fourth major crankshaft service bulletin or AD in three years had field shops scrambling to determine how many of engines would be affected and how customers would react.

Lycoming latest service bulletin-SB 569-calls for the mandatory retirement of 5100 serial-number specific crankshafts made between 1997 and 2002.Lycoming says it has found no failures in this lot of crankshafts but, nonetheless, wants owners to replace them at the first opportunity-overhaul or when the case is opened-but no later than February 21, 2009.

To soften the sting, Lycoming is offering crankshaft kits for any engine for $2000, but no allowances for assembly labor or for removal and reinstallation. However, Lycoming is also throwing in a basket of parts including rod bolts, gears, seals, piston pin plugs and bearings.

No AD Yet
Thus far, the crankshaft retirement is a mandatory service bulletin which owners of Part 91 aircraft dont have to comply with. But Lycoming would like to see it morphed into an AD. Lycoming does not have the authority to issue an Airworthiness Directive, the companys general manager, Ian Walsh, told us. Only the FAA has that authority. We have asked the FAA to issue an AD to require compliance with the bulletin. Lycoming considers the bulletin mandatory and, from our perspective, owners are required to follow it.

Walsh insists, however, that this isnt a recall. We want to emphasize that we are not recalling these shafts. We are retiring or changing the service life of these fielded parts. We are also giving customers a deep discount to replace them, which is unique to the industry.

The bulletin lists page after page of serial-number specific crankshafts. We asked if these are all vanadium-added crankshafts of the sort that played a central role in last years Interstate Southwest lawsuit against Lycoming.Interstate was the forging house Lycoming used for crankshaft billets. It won a $96 million judgment against Lycoming, which the engine maker is currently appealing.

These are all Interstate hammer-forged crankshafts, without regard to vanadium content. Not all of them are vanadium-added, Walsh told us.

Some of the failures which led to crankshaft recalls in 2003 and 2005 were in vanadium-doped cranks, but no failures have been reported in the 5100 cranks Lycoming wants retired now. In a letter to distributors, Lycoming said Lycoming Engines is instituting this proactive retirement from service to be consistent with our long-standing commitment to product quality and our customers.

This led us to ask Walsh this: Are those shafts defective or not? And if they arent defective, why does Lycoming want them replaced? There is no data to support any other action. Many manufacturers have, from time to time, changed the service life of on-condition parts and that is a known cost to all owners.

Uneven Impact
Engine shops we contacted at press time were puzzling over how to handle this latest action, which will affect thousands of owners. Thus far, not many owners had digested the bad news so shops told us reaction was muted.

And it wont necessarily be bad news for all owners. Given the wide sweep of the bulletin, owners are likely to be impacted unevenly. For example, the owner of a four-cylinder IO-360 overhauled in 1998 who flies often and is near TBO now will get a new crankshaft and with the value of the associated parts Lycoming is offering backed out of the cost of the overhaul, the $2000 cost may be nearly a wash. We suspect quite a few engines in the 1997 to 1999 time frame may be in such a favorable situation.

Its less rosy for the owner who overhauled in 2000 to 2002 and has 400 hours on the engine. Hell have to pay $6000 to $7000 for the work and decide whether to just split the case and install the new crank or pay additional money to overhaul an engine that doesnt need it. Bill Middlebrook, at Penn Yan Aero, says he heard from one customer in this very situation.

Shop Reactions
We contacted five shops for their reaction to Lycomings latest bulletin. Said Allen Weiss of Certified Engines in Opa Locka, Florida, This really hasnt sunk in yet. Normally, when something like this comes in, Ill call other shops and get their feel for it. I just dont know yet.

Would Weiss advise owners to replace a crankshaft proactively? It [the bulletin] says they havent had any failures. If they had had failures, I would probably be more apt to convince the owners to swap out. But I dont see that yet. Since the bulletin isnt mandatory, Weiss said he would agree to let an owner ignore it. But we would probably get that in writing and have the customer sign a waiver, he says.

Although all of the shops we contacted agree that Lycomings offer of a $2000 crankshaft is a bargain, customer reaction is likely to vary.

Jack Brza at Zephyr Engine in Zephyrhills, Florida had this to say about customer reaction: Theyre going to be pissed, because its going to cost them a lot of money. Even though Brza sees Lycomings discount crank offer as fair, it will be difficult to mollify owners who spent $20,000 for an overhaul four years ago who now have to spent another $7000 to replace a crankshaft.

Lycoming says its gearing up to handle the replacement volume but no one knows how many owners will replace their cranks proactively or wait until nearer the end of the three-year grace period or closer to TBO.

What To Do
One shop owner told us if it was his airplane, he wouldnt swap the crankshaft right away but would wait until nearer the expiration of the three-year period. Given the lack of failures, we doubt if Lycoming will be able to produce evidence to support an AD and it knows that owner and AOPA resistance to the idea is likely to be stiff.

Waiting this out for awhile makes sense to us. If theres no compelling need to open the case of an otherwise satisfactory engine and because Lycoming is allowing three years, it evidently thinks the likelihood of failures is low. We wouldnt be surprised to see some additional developments on this issue during the next few months, possibly an AD.