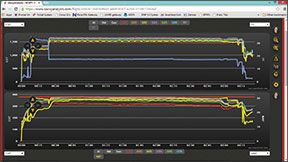 In the years since Savvy Aircraft Maintenance Management (SAMM) (January 2009 Aviation Consumer) brought managed aircraft maintenance from the turbine to the owner-flown piston world, the company’s practice of analyzing the engine monitor data of its clients has resulted in the collection of a massive database. According to company founder Mike Busch, it has the engine data from more than 600,000 flights.

Although engine monitors were originally developed to help pilots lean their engines in flight, the parameters they collect include extensive information on the operational health of the engines. SAMM has been using the data to diagnose problems in its customers’ airplanes—to catch developing issues before they become expensive.

SAMM began looking for a computer tool to do engine monitor data analysis more efficiently. Chris Wrather, who had been involved with SAMM from its early days and holds a Ph.D. in operations research, took the lead and developed analysis tools that work in fractions of a second.

Initially, the analysis tools were only used in-house, however, as they proved effective, the decision was made to make them public and free. Thus, Savvy Analysis was born to further the mission of SAMM—to help aircraft owners do a better job of operating and maintaining their aircraft—as well as to add to SAMM’s database for its ongoing research. SAMM and Savvy Analysis do not share the data they receive with anyone; however, the person who uploads data may share it with others.

Free Service
Users can upload data from any type engine monitor. The Savvy Analysis software opens and displays it in graphic format, sorted by flight. The user can then sort his or her flights as desired and take advantage of the analysis tools on the site. There is what we consider to be a user-friendly operating guide that helps the user get into and understand the graphically displayed data. Moving the cursor along the data provides a digital readout of each parameter—including temps, fuel flow and time—in what is referred to as a dynamic data box.

The software allows the user to look at the behavior of just the odd- or even-number cylinders to see if the mags are timed the same and can choose intervals in the data to find differences and rates of change.
The GAMI lean test has become the standard for checking the balance of the fuel injectors and to identify problem cylinders. When a user has conducted a GAMI lean test during a flight, the software will automatically calculate the GAMI spread for each test.

Savvy Goes Pro
After six months, Savvy Analysis offered a “Pro” service—after paying $129 ($199 for twins) for an annual subscription, a customer who uploads data can have as many flights as he or she wishes analyzed by one of Savvy’s analysts—who then generates a two-page report on the engine health on each flight. (The Savvy Analysis Pro service is included in the price of the managed maintenance service offered by SAMM.)
While an analysis could be requested for every flight, doing so would eventually drive up the price of the subscription and wouldn’t provide much relevant data.

Both Wrather and Busch recommend having the engine monitor data from a flight analyzed just before the airplane is going into the shop for engine work—to identify any problems so they can be fixed on that shop visit—and after work has been done on the engine, ignition, mags or induction system.

They also recommended that the flight to be analyzed not just be a routine cross country, but a test flight made according to the protocol on the website—essentially a GAMI lean test at less than 65 percent power and a lean of peak mag check to check the ignition system when it’s under the most stress.

Doing a test flight before a shop visit, uploading the engine data to Savvy Analysis and then clicking on the little “Sigmund” icon requests full analysis of that flight and generates a printed report that can be provided to the mechanic who is about to work on the airplane. It’s a fast diagnostic tool and much cheaper than trying to uncover such things as incorrect fuel flow, exhaust and induction leak and mistimed mags when the airplane is sitting on the ground.

FEVA
Recently, Savvy Analysis added a new, automatic service for its Pro customers (which includes all managed maintenance customers of SAMM)—Failing Exhaust Vale Analytics (FEVA). When you upload your engine monitor data, Savvy’s system automatically scans the EGT temperature readout and uses a proprietary algorithm to look for a signature that is indicative of a failing exhaust valve. If the characteristic pattern exists, the software flags it and starts the process that results in a warning to the owner and recommendation to borescope the cylinder.

FEVA came about as a result of observations Mike Busch made of engine monitor data more than 10 years ago. He noticed that for as much as 150 hours of engine operation prior to the time an exhaust valve fails, it generates a distinctive EGT pattern—an approximately one minute-long cycle over a 30- to 60-degree range.

As an exhaust valve starts to go south, becoming a burned valve, it develops a hot spot where it is not sealing perfectly with the seat—very hot gases from a combustion event begin to leak past the valve. Metal erosion begins and the valve can warp—causing the hot spot to get hotter and more gases to leak. Once it starts, the valve progressively goes downhill.

Ultimately, the valve will fail and a chunk of metal from the area of that hot spot breaks off, the cylinder goes to zero compression and stops combusting—the little piece of metal departs through the exhaust system. If it’s a turbocharged engine, it’s the luck of the draw whether the piece processes through the turbocharger, doing further damage, or the wastegate directs it harmlessly out the tailpipe.

Borescope It
Burned valve damage is typically visible through a borescope between 50 and 150 hours prior to failure. A compression test is far less reliable, according to Busch, giving too many false positives. The borescope is the gold standard for determining impending valve failure—and the engine monitor is the early warning system that says when it’s time to do the borescope exam.

The picture that a failing exhaust valve paints on the EGT graph of engine monitor data is a slow, perfectly rhythmic oscillation of the EGT for the affected cylinder. Busch said, “The pattern is easily distinguishable from EGT data ‘noise.’ There isn’t anything else in the engine that can oscillate that slowly. Normally the amplitude is pretty small. We normally look for an oscillation of 30-60 degrees from peak to peak. When we see it, we know the valve is failing.”

Busch said that Savvy will never recommend that a customer pull a cylinder based on FEVA alone—the borescope is the final diagnostic instrument for that decision. If the borescope reveals a valve that is exhibiting the characteristic asymmetric appearance and discolorations (green is bad) of impending failure, Savvy recommends that the cylinder be pulled and revalved.

Busch noted that few A & P mechanics have been trained in using a borescope and interpreting what they see. He strongly recommended—and we concur—keeping a copy on hand of the full-color poster put together for the Air Safety Foundation by Adrian Eichhorn and Dr. Peter Wu that shows healthy and deteriorating exhaust valves. It’s available at: http://tinyurl.com/op469zk.

Upload the Data
Savvy is working to get its clients to upload engine monitor data regularly—just as they send oil out for analysis at every change—not just when they think there’s a problem.

He and Wrather also recommend a flight test, data upload an analysis before the annual inspection, before any engine work and after engine work. Having a printout of the engine’s health to hand to the mechanic who’s going to be head first into your airplane’s cowling can, in our opinion, save money by letting him or her fix small problems before they become large.

We like the Savvy Analysis concept—the new FEVA program is, to us, additional protection at no extra cost. We also like the fact that the basic Savvy Analysis program is free, so owners can upload data and do their own analysis using the tools on the site. Savvy Analysis is at www.savvyanalysis.com.

In the interest of full disclosure, senior editor Rick Durden contributed to this report. He is also an attorney. Mike Busch was a client of his prior to and during the first year of operation of Savvy Aircraft Maintenance Manage