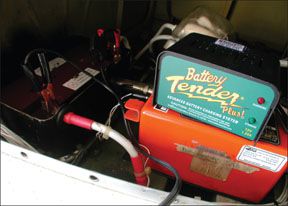 As more variations of wet cell batteries come into the marketplace-sealed absorbed-glass mat types, mainly-weve seen a profusion of so-called smart chargers intended to prolong their service life by avoiding ruinous overcharging. But do they actually work as claimed?

Yes, generally they do and considering the cost of replacing an aircraft battery, theyre probably worth the modest investment, especially for airplanes that are flown frequently.

Cheap battery chargers work by simply pumping out a slightly higher voltage than a charged battery and letting the internal resistance of the battery control the charge current and voltage. Its simple but can be hard on the battery, especially when excess voltage or current is used to speed up charging. This leads to overheating and warping of the plates as well as shedding of plate material, decreasing capacity and ultimately bridging the plates, leading to an internal short.

If long aircraft battery life is your objective, whether to pass a periodic battery capacity test or simply to avoid buying a new battery every two years, a smart charger is worth considering. The information in this article applies equally to 12- and 24-volt batteries. The chargers we tested are available in 24-volt models and with 240-volt AC input, too.

Aircraft batteries are typically overcharged (current wise) with automotive chargers designed for the much greater amp-hour capacity found in automotive batteries. A common 10-amp automotive charger is too much for an aircraft wet cell, more properly called a flooded-cell battery. Sealed AGMs can take high current charging, however. Typically, smart chargers operate at a lower current-in the 1 to 2 amp range-which is about right for smaller-capacity aircraft batteries. The downside is longer required charging time.For example, an 18 amp-hour rated G-25 12-volt aircraft battery would have a recommended charging current of 1.8 amps for 20 hours. For a 28 amp-hour model, it would be 2.8 amps.

Obviously, alternators are capable of much greater amperage above aircraft battery charging current requirements. Thats exactly why its a bad idea to use the aircraft charging system to charge a deeply discharged or new battery. The in-rush current is too high and overheats the plates of typical wet cell batteries, although AGM batteries are more tolerant of high-charging currents. Alternators keep the battery topped off while providing current for all the operating electrical accessories.

Smart chargers are capable of multi-stage-charging profiles, although what kind of profile is best is debatable. Charger algorithms reflect a compromise for what batteries the makers expect the charger to be used for. The best multi-stage charger profile is one specifically designed for your battery chemistry. Unfortunately, we know of none specifically for aircraft batteries, which are a minute portion of the battery market. Thus, in aviation, we are constrained by compromised charging profiles that will, nonetheless, do a superior job over a single-stage charger. A multi-stage charger can get a battery to 100 percent, although lots of time is spent completing that last 15 percent. Its worth it because the effect of 100 percent charging is improved battery life and maintaining rated capacity longer.

Smart Chargers
To get the longest life and highest performance out of any battery type, a smart charger is a worthy buy. Low output types are available for as little as $50. We tested two of the most popular smart chargers widely available, along with a common auto store 2- 10- and 50-amp charger.

The first test unit was the Battery Tender Plus. We got ours on the Web at the Battery Mart (www.batterymart.com) for $44, plus shipping. The second test unit, the Battery Minder, was purchased at the same discount price. (Both retail for $65.)

There are a number of variations available for both models, some less powerful than our test unit and some more so. There are 24-volt models, international voltage models, shop-size models and even waterproof models.The Battery Minder model even has a solar powered option.) We think the ones we chose represent the best bang for under $100 for a non-commercial user. If you want faster charging than overnight, bump up the current output to not more than 5 amps for a single aircraft battery.

Three-stage multi-chargers are the most common of the smart chargers sold.The three stages consist of bulk, absorption and float. (More sophisticated models employ an equalization phase as well.) The initial charge stage or the bulk charge period is done as a constant-current charge and gets about 85 percent of the charge accomplished. The constant voltage period is called the absorption stage and once the voltage no longer climbs for a period of at least an hour, the battery is considered charged and the charger drops to a float voltage, which is 13.1 to 13.2 volts or 26.2 to 26.4 volts. The charger should maintain this indefinitely without damaging the battery.

Its during the absorption charge that the charging requirements for AGM batteries differ most significantly from those for flooded batteries. AGM batteries require a longer period of constant voltage, so long, in fact, that the current drawn by AGM batteries is virtually nil for up to several hours at the end of the absorption period. Typically, it takes one to two hours for the battery charge current to drop to a few tenths of an amp at the beginning of the absorption period. After the battery charge current drops to this low level, the AGM battery still requires several more hours with the constant absorption voltage being applied. Thats why a compromise is always necessary in charging profiles, unless a battery-specific charger is purchased. The Battery Minder has a one-year unconditional guarantee and a five-year warranty while the Battery Tender Plus has a 10-year guarantee.

Both models have an extensive complement of additional features, such as reverse polarity protection, non-sparking connectors, short circuit protection, two types of connectors (temporary clips and ring terminals) and temperature compensation. Both models claim multiple battery charging capability, but at these modest current levels, this would be strictly for maintaining a full charge, since a one-amp charge would be divided up among multiple batteries connected at the same time.

Both models automatically go into the trickle charge mode at the completion of the charge cycle. They do not shut off. The charge voltage is supposed to be low enough to prevent overcharging.

There were significant differences in the charging method between the two chargers. The Battery Tender Plus uses a three-stage charging algorithm of bulk, absorption and float. The Battery Minder uses the more basic constant-voltage charging technique and depends on the pulse mode to provide the additional punch to help fully charge the battery. Its charge current was 20 percent lower than the Battery Tender Plus and it showed in significantly increased charging times.

We tested the chargers on both wet cell (flooded) and sealed AGM Concord and Gill batteries. Some were brand-new, dry-charged and two were sulfated.One sulfated battery was at the recommended minimum of 10.5 volts resting and the other at 6.5 volts, truly in bad shape, but less than a year old.

Findings
The Battery Tender Plus did best in all tests, although both models did a respectable job of charging, the Tender did it better. The 14.4 volt charge cut off was just right to get maximum recharge and to maintain capacity values. The Battery Minder topped out at 14.175 volts, which falls slightly short of the ideal for longest battery life and capacity maintenance.

Its hard to beat a multi-stage-charging regimen to fully charge a battery. The Tender also charged significantly faster. While the pulse from the Battery Minder was definitely there on the scope view and weve seen respectable results in the past from higher powered pulse chargers, given the choice between pulse and single-stage charging versus multi-stage and no pulse, well take the multi-stage charger every time.

We also tried the Battery Tender Plus as the initial charger for a new Concorde rated at 29 amp-hour CB-35A. It performed fine with an overnight charge. That said, neither of the rescued sulfated batteries would be up to snuff to pass an FAA capacity test. We got them back to about 65 to 75 percent of rated capacity.

We found a more significant issue with the trickle charge mode of the Battery Minder. Time after time, it only dropped to 13.55 volts in the trickle mode, where 13.1 or 13.2 volts is the accepted industry value for avoiding boiling the electrolyte out of a wet cell over extended periods of connection. (The charge voltage never stops.) The Battery Minder specifications call for 13.2 volts float voltage, so ours was an anomaly. If you choose this product, be sure to check the float voltage levels promptly and exchange it if you want to keep wet cells in long-term maintenance charge states.

While an AGM battery would probably be fine at this voltage, its definitely too high for a typical flooded-cell battery. You could use an external timer, but why bother? Last, our scope meter showed about twice the AC voltage leakage through the Battery Minder on the DC circuit as with the Tender Plus. Both leakage levels were quite low and presented no real problem, but it does decrease the efficiency of the charger. This could be seen as contributing to the much longer charge times for the Battery Minder than its 20 percent lower current output would suggest.

Multi-stage chargers are still king, in our view. Deltran has a wide selection of chargers and all types of input and output voltages and charge currents. We couldnt find any fault in any mode of operation.

With the VDC Battery Minder, on the other hand, we would like to see a higher charge cutoff voltage for optimal charging and a lower voltage trickle mode for long battery life. One option that we plan to test for a future article is the solar-powered charger from VDC, a great option where no AC electricity is available.