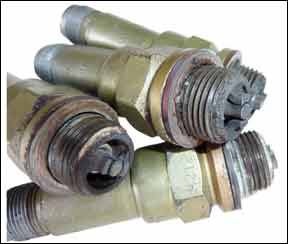 It used to be that we didn’t pay a lot of attention to what sort of spark plug was installed in our engines. We put in what our mechanic recommended, complained when they fouled, paid to get them cleaned and gapped at the annual and threw them away when they wore out.

With the electronic engine monitor unlocking many of the combustion mysteries under the hood, increasing attention is being focused on spark plugs, the quality of the spark they produce, how long they last and how their design might save us cash. If you’re running a normally aspirated, large-displacement engine at least 100 hours a year, we think that fine wire plugs will be less expensive than the massive electrode style when you total up the full cost of the plugs, maintenance and possibly fuel efficiency. And, yes, we recognize that the purchase price of fine wire plugs is two to three times higher than massives.

It also appears that electronic engine monitors are teaching us that engine problems we used to blame on other things may be more accurately traced to a spark plug malfunction. Thus, we have become concerned about and watching two ongoing issues with reliability of Champion plugs, which we set out in the sidebars to this article.

Some Anatomy
There are currently two manufacturers of aircraft spark plugs, Champion and Tempest. Champion has seemingly been involved with powered flight forever, having made plugs for the Curtiss Jenny, a WWI trainer. Tempest, a new comer, took over the Autolite/Unison spark plug line. Both make a full line of massive and fine wire plugs. Boiled down to the basics, the purpose of an aircraft spark plug is to take some 25,000 volts from a magneto and create a spark that jumps through a spark gap between center and ground electrodes with the proper intensity to ignite a fuel/air mixture effectively, efficiently and without fail.

It’s the type of electrodes that is of interest here, because the newer technology version, the fine wire, is more resistant to erosion and fouling in use, needs less maintenance, may produce a little more fuel efficiency and seems to last two to three times as long as massives.

Massives
The massive electrode plug uses, as the name implies, two large ground electrodes on either side of the center electrode. It has a lot of material built in to allow for wear. As with anything to do with engines, the critical factor is metallurgy—the materials used in the electrodes have to stand up to the heat of the spark and combustion.

The nickel-alloy used in massive electrode plugs makes them suitable for about 400 to 500 hours of operation with careful maintenance, and rotating the plugs every 100 hours. We know of massives  lasting more than 900 hours on turbocharged engines, particularly if the pilot is careful to aggressively lean during any low-power operation, such as on descent and on the ground, to avoid lead and carbon fouling. Selecting full rich mixture on descent is a sure way to foul massive plugs. Figure on a ballpark price of $25 to $40 per plug. The big range is because retail prices vary and they sometimes go on sale. When you’re buying 12, it pays to shop around.

Fine wire plugs have a single, small-gauge wire ground. Iridium is the most common material because it’s resistant to the inevitable erosion. There’s no free lunch, however; iridium is expensive, so fine wire plugs cost two to three times more than massives. Plan on $60 to over $100 a pop.

Fine Wire Endurance
The resistance to erosion does have a payoff. Fine wire plugs tend to last two to three times longer than massives and 1500 hours in service is not uncommon. Some users claim as much as 2000 hours, although we’re a little skeptical of that number. All types of spark plugs are considered to have reached the end of their lives when the electrodes have worn down to half their original width. They cannot be reused. And no matter what type you use, if you drop one from an inch or higher, it’s ruined. Throw it away. No exceptions.

We are convinced that one of the dirty secrets of aviation is that a lot more plugs are dropped than is ever admitted. It’s tough to accept that you’ve just made a $100 bill evaporate because of a simple error. As might be imagined from looking at the sparking end of the plugs themselves, the fine wire’s more open architecture is consistent with it being less prone to lead, carbon or oil fouling than massive electrode plugs. Most maintenance technicians and owners report that mas-sives should be removed, cleaned and gapped every 100 hours and sometimes more frequently, because of their susceptibility to fouling. That 45-minutes of shop time adds up.

That’s not the case for fine wire plugs. Not only do they not foul as readily, the iridium wire holds a steadier gap than massives, which cuts the frequency and cost of maintenance.
From our investigation, there is reason to believe fine wires may run hotter than comparable massives. Hotter plugs more effectively resist fouling, a plus in cooler running engines, which often describes normally aspirated engines with good baffling systems.

Handle With Care
There is a caution: Iridium is brittle and being too enthusiastic when gapping a fine wire plug can result in a broken electrode and worthless spark plug.Overall, we believe that the cost of maintenance over the 1500-hour expected life of a fine wire plug in a normally aspirated engine falls on the side of the fine wires, especially for the owner who is pulling plugs for maintenance “on condition” rather than every 100 hours.

Our observations are that massive plugs effectively resist fouling in the hotter-running turbocharged engines being run lean of peak by pilots who also aggressively lean on the ground. Under those conditions, we do not see a benefit to going to the more expensive plug.Some owners install fine wire plugs in the bottom of the cylinders and massives in the top because they have had fouling problems with massives in the lower holes. That’s fine, there’s no problem or penalty involved with mixing fine wire and massive plugs in an engine.

Performance
We’ve found almost no data on engine performance and fuel efficiency on fine wire versus massive spark plugs. What we have been able to find is a test that was run by RAM Aircraft several years ago.In its tests in the same aircraft, running at the same high power settings and 100 degrees rich of peak EGT, RAM reported a 2.2 percent increase in fuel efficiency with fine wire plugs in turbocharged Continental engines. Brake specific fuel consumption for fine wires was 0.498 gal/HP-hour compared with 0.509 for massive electrode plugs.That may be within the margin of experimental error, nevertheless, a one to two percent savings in fuel over more than 1000 hours adds up.

We have some concern with the RAM tests as 100 degrees ROP at high power settings may well be reduce detonation margins and high CHTs will result in reduced engine life. We are curious as to whether the data would hold up when the engines are being run outside of the “red box” for detonation risk, both rich and lean of peak EGT, and on normally aspirated engines.
Without more data, we can’t make a recommendation for fine wire or massive electrode spark plugs when it comes to fuel efficiency.

Our view? If you have a normally aspirated engine that runs cool, are planning to keep your airplane a long time and fly it 100 hours a year, fine wire plugs are worth the investment from a longevity and cost of maintenance standpoint.

Otherwise, the lower cost massive electrode spark plugs will work well. While we won’t add a performance or fuel savings affirmation for fine wires without more data, it’s nevertheless true that a plug that isn’t fouled puts out a better spark, which means better combustion in the cylinder and better performance.