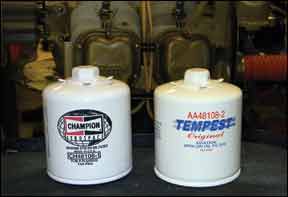 While there are currently two choices of readily available, spin-on aircraft oil filters­—Champion Aerospace and the Tempest Original, made by Aero Accessories, what goes on your engine during an oil change will likely depend on what your maintenance shop has on its parts shelf. It may also depend on which brand of filter is currently on the engine.

For this article, we put the two filters head to head. We bought one each Champion and Tempest 48108-series filter—which fit Continental engines—and sifted through their technical specs. Thanks to some help from the Total Aircraft Maintenance shop in Hartford, Conn., we cut each filter open and scrutinized their design. Here’s what we found.

OIL FILTRATION 101
We all know that oil filters help keep engine oil clean by filtering metal, dirt and other contaminants. Plus, replacing the filter at regular intervals is key to engine protection, although as the sidebar on page 21 explains, we might not be changing oil as often as we should.

Spin-on oil filters from Champion and Tempest share basic characteristics. They come with a one-inch, wrench-off, hex nut built into the filter’s top with safety-wire lugs. Internally, they use a paper-like media to perform the actual filtration and they fit the engine the same way. Both are available in short and tall design. Tall filters, of course, have more filtering media, which some believe are effective for longer service intervals.

The effectiveness of the filtering media is measured in porosity, and it’s said that the average porosity of aviation oil filters is 40 microns. This means the filtering paper might catch contaminating particles sized 40 microns and larger. Smaller particles potentially enter the engine, of course.

Some filters have an internal filter bypass—a mechanical fail-safe pressure-valve that opens if oil flow through the filter element becomes restricted. This happens if it becomes clogged with contaminants or if cold oil is too thick to flow through the filter. Dirty oil is better than no oil. Since most Lycoming engines have a filter bypass somewhere on the engine, the Lycoming-specific 48110-series filters omit the bypass valve. However, the 48108 series we tested has internal bypass, and we noted a distinct difference between the two brands.

Tempest
Despite rumors that it’s built by a third party, the Tempest Original filter, which has a list price of $29.49, is manufactured by Aero Accessories in their own North Carolina plant. The Tempest has a nearly identical outer housing as the Champion. That’s because before Aero Accessories took over the line—and reengineered it internally—the filter was built by the same company that built the Champion. Compared to the Champion, we like the heavier nut-welds on the Tempest hex nut. Oil filters should be snugged to the engine with a torque wrench and the heavier welds guard against breaking. Tempest claims their nut welds are so strong that the filter can body will bend before the welds break.

Internally, we counted 63 pleats in the filtering paper and measured .0275-inch thickness using a vernier caliper. We stretched the filtering paper on the work bench and both filters measured around eight feet in length. We had to work hard to access the filter bypass mechanism, which is nothing more than a pressure valve-spring cage that, when open, allows oil to continue to flow toward the filters outlet. But unique to the Tempest design is a by-pass valve safety containment cap. This cap surrounds the bypass valve in case the valve were to disintegrate at the securing spot welds—potentially spewing bits of the valve into the engine, or blocking the filter outlet hole, starving the engine of oil. Tempest president and engineer Tim Henderson said that to his knowledge, this has never happened to one of his filters. He showed us photos of a competitor filter where the by-pass spring cage broke loose and occluded the filter outlet. The resultant oil pressure in the filter built so high that it burst the seam on the filter case. It also resulted in an in-flight engine shut-down and emergency landing. For this reason, Tempest continues to include the retaining cup design as a prophylactic measure.

Also unique to the Tempest is an internal filtering ring-magnet. Its purpose it two-fold: It’s intended to catch fine particles of steel which might pass through the filtering paper. But the sizeable benefit, in our estimation, is that the magnet makes it easier for a mechanic to spot critical metal during an oil change. It’s easy to see larger pieces of metal in the filtering paper but nearly impossible to see particles of fine steel, the result of valve guide, lifter and cam wear, for example. The presence of these fine particles would, according to Tempest, create a fuzzy appearance on the surface of the ring magnet.

A veteran technician told us the ring magnet is the first thing he looks at when changing a Tempest filter. “The fuzzy appearance of fine metal stuck to the magnet is my first clue that something might be going on in the engine—something that might not be easy to spot in the filter paper”.

For Continental applications, the Champion’s bypass valve is a separate assembly inserted into the element’s end opposite the base, which is sealed with a fiber gasket. Our sense is the larger valve induces more travel, which may or may not play a role in more oil pressure and flow when the filter goes into by-pass. Speaking of more flow, the Champion filter uses eight inflow holes while the Tempest only uses four. On the other hand, both filters have the same size outflow so it’s unlikely that more inflow makes a sizable difference in performance.

Champion uses a two-piece gasket in its filters, compared with the smaller, single gasket in the Tempest. Champion says its gasket design helps prevent stress cracking. The inner part of the gasket assembly is harder than the thinner, outer ring. It was obvious to us that the gaskets in the Champion seem more substantial than the one used in the Tempest. The same is true for the Champ’s beefy coil spring, which keep the filter element mated to the internal gaskets.

What They Say
During our research, both Aero Accessories and Champion tenaciously proclaimed their filters are better than the other. For instance, according to Champion, its resin-injected filter traps and holds more dirt and harmful particles than Tempest—a claim we couldn’t confirm or deny without extensive lab testing.

We were nearly sold on the ring magnet concept and asked Champion why they don’t build a ring magnet in their filter. According to Champion’s Kevin Gallagher, Champion feels that commercially available oil analysis services are a better way of monitoring engines for wear metals.

“Engine wear metals contain both ferrous and non-ferrous materials. With a magnet retaining only those magnetic materials, Champion would not want this magnet to be used as the main inspection point for wear metal contamination,“ said Gallagher.

Moreover, Champion feels that the magnet acts to gather dangerous metal particles at the entrance of the bypass valve. Then, when the valve opens—such as during a cold start, these gathered particles can be released and travel downstream of the filter.

Champion also claims that metal build-up could put the filter into bypass, a point Tempest dismisses.

“The magnet attracts fine particles, but not at such a high rate as to overload it, at least in a normally running engine, between regular filter changes,” said Tempest’s Tim Henderson.

We talked with several mechanics who simply didn’t have a particular brand loyalty to either manufacturer’s filter. Most told us they put on whatever the customer wants or whatever is already on the engine. Not Brian Doyle, an experienced technician who manages Midnav Aviation Services at North Adams Airport in Massachusetts. He cares enough about his customers’ engines to do a bit of oil filter research on his own. According to Doyle, he thinks the ring magnet in the Tempest might provide some owners with additional peace of mind, but prefers the Champion.

“I tore apart both filters and prefer the heavy-duty coil spring inside the Champion. Also, I’ve never seen any metal trapped on a Tempest ring magnet.”
We asked Doyle whether his customers are concerned about the Champion’s higher price.

“My sense is that if customers are sold on the perceived higher quality of the Champion, an extra five bucks  is worth it to protect a $50,000 engine,” said Doyle. Like all of the respected techs we spoke with, Doyle agrees that more frequent oil changes are important for engines that sit for longer periods of time.

Conclusion
We have no problem installing either a Champion or Tempest on our engine. We think both are high-quality filters. The last time we reviewed oil filters, we picked Champion as the winner, but this time around, Tempest convinced us that their design has a slight edge, because of the ring magnet and bypass valve design.

On the other hand, our discussions with Champion got us thinking about the trapped, dangerous metal re-entering the engine when the filter goes into bypass—which could be every time you start a cold engine without a preheat.

Last, while the five-dollar saving afforded by the cheaper Tempest may seem trivial to some, we’re all about saving money wherever possible. To that end, we would put the money saved toward more frequent oil changes.