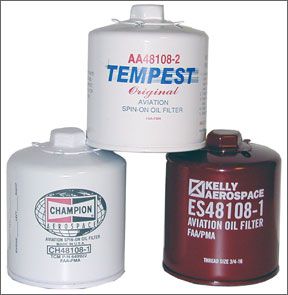 Replacing oil thats been fouled by combustion by-products is one of the easiest and most-reliable ways to help prevent internal corrosion of your engine, thus the recommendation for frequent oil changes.

Between changes, of course, we depend on frequent flights and the oil filter to help keep dirt and metal shavings from circulating and potentially damaging expensive parts. And when we change the oil, examining the used filter can help identify potential problems or confirm that all is well.

Which filter to install at the next change often is determined by whats available on your mechanics shelf, or by the FBOs profit margins. Since all filters are FAA-PMA approved, theyre all pretty much the same, right? Not necessarily. To find out for ourselves, we obtained samples from the three companies manufacturing spin-on oil filters for Continental and Lycoming engines-Champion, Kelly and Tempest-cut them open and examined their construction. We found the Champion filters had more robust components, but all three have different features.

Even though we found several differences between oil filters, the similarities far outnumbered them. For example, all of these filters are FAA-PMA approved. Additionally, they all use the same basic design-although some details may vary-and part number, while prefixes and suffixes differ among manufacturers. Theyre all the same diameter, of course, although height can vary. And they all fit the same mounting base on your engine.

When we last looked at oil filters, in 2004, we noted an SAE standard-Aviation Recommended Practices (ARP)-defines the design, manufacture and testing of oil filters used in piston aircraft engines. That standard, ARP 1400, last updated in 2007 and now in revision B, satisfies the FAA. However, and as we noted in 2004, neither Champion nor Kelly chose to meet all standards of ARP 1400. Champion, for example, tells us it elected not to get “locked into” the filter specification.

Via email, Champions Jim Liddle responded to a question about the standards: “Our filter color is different than what is specified in the ARP spec; we may make product improvements that deviate from the specification. Some of the performance requirements are controlled by the engine manufacturers and they may require other changes that will deviate from the spec requirements. … For the most part, Champions focus is on meeting the engine/airframe manufacturers requirements and not just that of the subject ARP specification.” We sought similar feedback from the other two manufacturers but they hadnt responded at our deadline.

That said, the filters all share basic characteristics. For example, they all come with a one-inch hex nut built into the filters top and safety-wire lugs. They all use a paper-like media to perform the actual filtration and their exteriors offer

dedicated space to annotate the day and tach time they were installed. And they all use a thick, heavy base and a seamless can, containing the filtration media, bypass valve and other components. The photos shown here detail what we found when we cut open each filter.

We noticed some differences among these filters immediately. Tempest packages their filters in a sealed plastic bag before the whole thing goes into the box. A nice touch, designed to eliminate any contamination or corrosion. With that in mind, we noticed some corrosion on the base of one of the Kelly filters when we unpacked it. That filter had a manufacture date of November 2008-along with a use-by date of November 2013-and was obtained from Aircraft Spruce. The Kelly filters corrosion wasnt flaky or something wed refuse to install-it was just a small, discolored spot on the base. An identical filter obtained directly from Kelly-and displaying the same manufacturing date-showed no corrosion. We failed to locate any dates on either of the Tempest filters.

As we started cutting open the filters, we noticed another difference: The Kelly filters were noticeably easier to get into. Thats because the sheet metal used to form the Kelly filters can was thinner.

The filters we chose to evaluate, the 108 and 109 part numbers, are basically the same design but of different heights. Both incorporate the bypass valve required per Continental specifications. For Lycoming engines, the bypass valve is built into the engines. Either way, it opens if flow through the filter element becomes restricted. This happens if it becomes clogged with contaminants, or when if oil is too cold and thick to flow through it. Thats another reason to thoroughly pre-heat an engine and its oil in cold weather.

The bypass is where we found a fundamental difference between filters. Champions bypass valve is a separate assembly inserted into the elements end opposite the base and sealed with a fiber gasket. Both Kelly and Tempest use a

smaller bypass valve spot-welded into the element. The Tempest filters valve opening is larger in diameter than the Kelly products and about the same size as exhibited by the Champions. Also, the Tempest bypass valves outer portion is magnetized, an interesting detail. More on it in a moment.

The Champion valve is much more substantial than the other two and affords greater travel, which, it seems to us, would allow more oil to flow through it in a bypass situation. Many Continental engines call for the bypass valve to open at a differential ranging from 12 to 16 PSI. We didnt measure that value for these filters, but we did note the Kelly filters bypass valves were slightly stiffer than the Champions or the Tempest, requiring more force to open

Other differences involve the internal gasket between the filter element and the base and the spring used to hold the filter element firm to the base. Champion uses a two-piece gasket in its filters, which it says helps prevent cracks: The inner portion is made from a material much harder than the thinner, outer ring. Both Kelly and Tempest use smaller, one-piece gaskets, which look remarkably alike. Finally, Champion uses a hefty coil spring to keep the filter element mated to the two-piece internal gasket. Both Kelly and Tempest use a flat, stamped, spring-steel affair instead.

Additionally, the Tempest 108 filter is a new design and shorter than the other two. According to the company, the filters redesign was enough-in its opinion-to garner a new suffix of -2, respecting the changeover Champion made in 2004 to add -1 to its then-new filter designs. Tempest said they had received many requests-enough, anyway, to justify the change-for a filter even shorter than a standard 108 for those owners using that size filter in tight spaces. The resulting “dash two” filter should require about .375 of an inch less space when installed.

A final difference among these products involves the amount of filter media available. Among the 108 filters, we measured the most filter media in the Champion, at about 271 square inches. The Tempest measured 265 and Kellys 108 came in at 252 square inches. That the shorter Tempest 108-2 filter still includes more filter media than the Kelly tells us the company added an extra pleat or two.

The only other item we discovered was a slight deformation in the 108-2 Tempests media pleating. When disassembling it, we immediately noticed a gap created by non-uniform folding of the pleats. They all were formed correctly and without tears, but where the other two filters showed basically uniform folds, this one displayed a void.

After comparing the construction quality and attention to detail these filters display internally, we think the Champion is a better-built product, even if it does cost four dollars more. The larger, two-piece internal gasket of materials with different densities, the most filtration media, the coil spring to keep the media mated to the base and the substantial, separate bypass valve all are details we feel justify the 25-percent higher price. (See street pricing and other details in the table on page 9). These characteristics, we feel, result in a better product.

When comparing the Tempest and the Kelly filters, we liked the Tempest best, for two reasons. First, its bypass valve is magnetized. While there arent many ferrous metals in todays typical piston engine, there are enough that magnetizing the filter might be beneficial.

Champion disagrees; pointing out its the bypass valve thats magnetized, making it useless during normal operation. And, if the bypass valve opens after the magnet has attracted ferrous particles, theyll likely be dislodged, re-entering the engine. Champion may be right, but we like the idea of a magnet to collect ferrous particles out of our engine oil. Maybe the drain plug is the right place.

Finally, the Tempest comes with slightly more filter media than the Kelly, even if its shorter overall. If your application is tight for a standard 108 filter, the Tempest 108-2 may be just the ticket. Theres nothing wrong with the Kelly filters-except maybe a thinner can-its just that the other two products offer verifiable advantages.

In the overall picture of piston aircraft operation these days, oil and oil filters are relatively inexpensive. As we reported in our October 2008 issue, frequent oil-and filter-changes are a lot cheaper than a new engine. Of the filters widely available, the Champion products are a better deal, in our estimation.