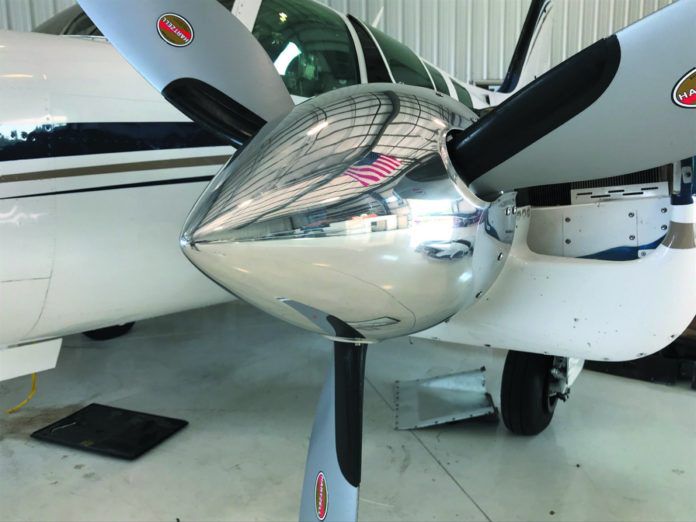 About the only time we pay much attention to propeller spinners is when cleaning the bugs off, and hopefully at the annual inspection. Truth is, spinners are one of the most overlooked parts on the airplane because they’re generally trouble-free. It’s an accessory that is always there (although they can depart the airplane), subtly adding to the look of your aircraft and frankly, as something pointy out front where it pierces the air and helps the plane get the most speed, engine cooling and power.

But at some point, you might be faced with spinner maintenance or replacement. For this short article I did some research to see what options there are. Herewith is a report.

Spinners have been around since the early 1900s. Tractor aircraft used radial engines for saving weight (mainly due to their small crankshafts), and the spinner fitted over the propeller to smooth the airflow into the cowling and fair out the prop hub. Some prop hubs on the carved props were quite large.

When aircraft transitioned to inline or opposed engines, spinners weren’t initially considered necessary, but for decoration someone developed the Skull Cap spinner that simply covered the prop bolt heads. You’ll see these on Cubs, Champs, Vagabonds and the like.

For larger planes, spinners were developed that covered the entire prop hub. The dome comes with a couple of bulkheads; the larger bulkhead slipped on over the prop attach bushings, the prop was mounted and then the smaller front bulkhead is installed, through which all of the bolts ran. The bulkheads and the prop have to be keyed so that the prop would be at the 10 o’clock position when stopped. One of the prop bushings and one hole in all other parts are slightly larger to facilitate this. Naturally, the prop bolts must be safety wired, and this is one item on the annual inspection-checking torque and replacing new safety wire. On wooden props this must be done around every 50 hours or with a seasonal change.

While we’re at it, it’s worth a review on prop positioning. The prop has to be “keyed” to this 10 o’clock position to facilitate hand-propping the aircraft. Many early aircraft had no electrical system or starter. Even planes with starters often had to be hand-propped for one reason or another. The 10 o’clock spot puts the number one cylinder at top dead center, the spot where the mags are referenced when timing them. On small engines, a simple flip of the blade usually starts the engine in an instant. I witnessed this firsthand recently at Jack Brown’s Seaplane Base in Florida, where its fleet of Piper J3 Cubs on floats have no starters. The instructor or an employee hangs off the float, flips the prop and the little engine lights on the first try almost every time.

Spinners for larger aircraft that use constant speed or other props are rather intricate, with the rear bulkhead bolted to the prop hub itself in some cases. All prop manufacturers have maintenance requirements for their products and these can be involved and are mostly for mechanics. Manufacturers also provide propeller logbooks and it’s here where you might find work done to the spinner.

An aircraft owner doesn’t have to do very much to keep the spinner maintained. And anything he or she does is pretty basic. You keep it clean, inspect it for cracks at the prop holes, look for cracks and elongated holes at the mounting screws and have the prop inspected at the correct intervals and overhauled at TBO, per the manufacturer specs. An owner can and should remove the spinner and can inspect/replace the safety wire on the prop bolts, according to a couple of things in the FAA’s Approved Owner Maintenance List Part 43, Appendix A, Paragraph C.

It is legal to remove a fairing, which technically is the aerodynamic definition of a spinner, and it is part of the cowling-which is also repairable under Part 43. The owner cannot install the prop or check torque.

Realize that spinners are tough enough to take a lot of the stress caused by the engine and airplane, but they are relatively fragile if you drop one, and difficult to repair if the damage is significant. They suffer from engine and ignition impulses and vibration, plus they can suffer from corrosion if they sit ignored. Loose prop bolts in holes that have elongated, and loose or overtorqued attachment screws, can cause damage.

By their nature, the process used to manufacture a spinner makes it strong. Starting with a ductile aluminum like 3003/T14, a flat plate of aluminum is spun at significant speed while chucked into a metal spinning lathe. Different thicknesses are used depending on the size of the spinner. An “iron” is then pressed into the aluminum sheet, causing it to flow onto a turning “chuck,” which is the shape the manufacturer requires. This realigns the metal matrix and balances the dome.

To the letter of the law, it is perfectly legal to disassemble anything on an airplane; as an owner you just cannot reassemble certain things. If you want to take the spinner, bulkheads and prop off to inspect them (say you felt a vibration and are trying to track it down), go right ahead. Most of the time, you can see damage without disassembly, but if you buy an airplane from a DIY owner who may have installed it himself, you may want to take a look at all of it-closely. What might you see?

Cracks are the most common damage, and usually these are at a screw hole or in the attachment bulkhead. School is out on whether you can repair a spinner or bulkhead by welding it. In my research, I found that a couple of companies say that they have certified repairs for this. These are not cheap repairs because the bulkheads themselves are more expensive than you would imagine.

One thing I would not do is stop-drill a hole in a spinner and fly the aircraft. I tried it-and I watched the spinner fly up over my windshield never to be seen again. I was young and dumb and had just read about stop-drilling cracks in aluminum. We dodge many bullets in life.

The vibration that can cause damage could be eliminated with a dynamic balance. Almost every shop can do this these days. This balances the propeller, hub and spinner assembly along with any crankshaft or powertrain vagaries. A dynamic balance exists when the entire assembly (a rotating system of mass, including everything that turns with an aircraft engine) is balanced while in motion and no centrifugal force is created. Turbine-like smoothness can be achieved.

A dented spinner may or not be repairable. I have used suction cups and even hot melt glue, like the paintless dent guys do. Some manufacturers tell you to replace a spinner if an attached bulkhead is damaged. Some dents might need to have the spinner annealed, hammered out or planished to reshape, but it takes a good metal worker to do this.

The second most common damage is purely a result of maintenance. This is attachment screw holes that become distorted. Some are tightened so much that they distort the dome metal around the hole. This causes stress risers that could turn into cracks. A trick is to weld the screw holes shut, planish to flatten them and then redrill.

A spinner left on an airplane for long periods of time could develop corrosion that appears as a rash under the paint. The paint will flake off and the corrosion presents as a white powder. Some manufacturers want you to replace the part if corroded, but you might strip the paint, treat the corrosion and sand it smooth. If the corrosion is minimal, you might get by without any action, but check with the manufacturer or IA to be sure.

If you need to replace your spinner for whatever reason, perhaps if you want a shiny chrome spinner, they are available from the manufacturer with a few aftermarket outlets. You can even polish your spinner if you want to do the work. Composite spinners are getting popular. TCB Composite (www.tcbcomposite.com) makes composite spinners and bulkheads for Cessna, Piper and Grumman. When first introduced years ago, composite spinners got a bad rap, but TCB has perfected and certified their parts. They also have a source for having the spinner chromed. There is usually one at its airshow booths. The end result is impressive and costs significantly less (nearly 80 percent) than an OEM spinner replacement.

In general it’s rare that a spinner has to be replaced, but sometimes it’s unavoidable. An engine upgrade might require a three-blade prop and that of course requires a different spinner. A lot of mods shops have shelves of spinners on hand so ask if they have one that works for your application. Keeping your spinner clean and doing the regular inspections-especially when you think you feel a new vibration-may help you avoid replacing it.