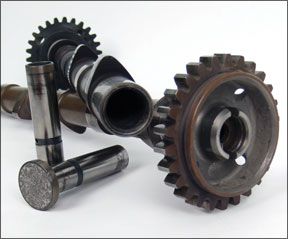 Just as you thought it was finally safe to buy a cylinder, now comes a crisis over camshafts. Specifically, engine shops tell us theyre seeing premature wear and failures due to spalling and many also report that cams that used to make it through one TBO run and into another are now too worn to reuse.

This trend has actually been brewing for a number of years and no one seems able to say definitively if its getting better or worse. Opinions bridge the divide. “Definitely worse, in my opinion,” says Penn Yan Aeros Bill Middlebrook, who shipped us a couple of scrapped cams to prove the point, along with a couple of spalled lifters. “We had a brand new cam come apart in the test cell-it wiped one lobe,” he added. This sort of thing used to be limited to Lycomings, whose cam is mounted higher in the engine core, away from oil misting from the crankcase and in line with blowby from the cylinders.

But lately, shops tell us theyre seeing more cam-related wear issues in Continental engines, too. TCM seems to have noticed this and in 2005, it issued SID 05-1, a service directive related to cam and tappet wear.

And speaking of tappets, some in the industry think thats definitely the problem and a worn cam is the secondary result. “We think the problems definitely start in the lifters, predominantly,” says Greg Merrill at Aircraft Specialties Services, a Tulsa house that regrinds and reconditions cams and tappets for many engine shops. His company also developed CamGuard, an anti-wear, anti-corrosion oil additive.

“We do see the occasional cam with a bad lobe, but its rare. Its almost always a problem with the tappets,” Merrill adds.

What exactly is going on here? Everyone has a theory, so take your pick. Some, like Allen Weiss at Opa Locka, Floridas Certified Engines believe that something changed in the fuel or the oil in the recent past, recent being perhaps in the last 10 years.

Weiss has been in the engine business since 1978 and he and other shop owners tell us that they used to routinely reuse camshafts from first-run engines, often with a regrind. “Im going from memory, but we used to reject one cam in 20 for reuse; now its more like one in seven,” Weiss told us.

Weiss doesnt necessarily buy the standard explanation that infrequently flown engines are subject to corrosion and since flying hours are down, rust is up and thats whats causing the problem. “I just dont see a pattern here. We see cam failures in engines that are flown a lot, in engines that arent flown much, in airplanes that are hangared and not hangared. Even in some flight school airplanes,” Weiss told us.

One shop, who asked not to be named, said it conducted a metallurgical evaluation of cams and tappets and believes the problem is tappets, not cams. During a period prior to 2000, this shop owner said, both Lycoming and Continental used the same manufacturer for tappets and they were being produced without the correct hardening of the tappet-to-lobe surface. Because the point loading between cams and tappets is among the highest load in the engines, slight variations in hardness or surface quality can rapidly degrade into a lunar landscape. (See the photo above.)

Aircraft Specialties Greg Merrill doesnt buy that theory. “Weve crawled down into the pits of these things with electron microscopes and were just not seeing a metallurgical issue. I think the chemistry in the metal is generally okay,” he explains. While he concedes that occasional quality issues are inevitable in both cams and in tappets, he believes that corrosion is probably the larger actor.

“Corrosion pits set up the chain of events. Usually, its the lifter first, predominantly,” says Merrill. Moreover, Merrill says he doesnt totally agree that the incidence of cam failure is on the rise. But he has his own theory.

“We see a direct relationship in Lycomings-when a cam has failed, its very likely that a cylinder had been removed at some point,” he says. That means the engine ran on mineral oil for awhile to break in the new jug and if it was replaced, chances are the compression tanked. That means the cylinder may have run for an unknown number of hours with a hot stream of blowby blasting the cam, which is located

dead center behind the cylinder banks. Blowby also acidifies the oil which, when combined with higher moisture content of shorter, less frequent flights-makes for an absolutely evil corrosive environment in the crankcase.

Some mechanics believe that a thin layer of corrosion on polished engine surfaces will wipe off when the engine is run again, which may be true. But all corrosion causes pitting of some depth and the more highly loaded the surface, the more likely the pitting will lead to progressive degradation.

Cam failures are rarely catastrophic events, but they make a mess of the engines innards. As the lifter tanks, it chunks, spewing metal into the oil and trashing the prop governor, pump and oil lines. But not many cam/lifter failures get that far. For owners doing oil analysis, the failing parts show up as high iron and the lab will presumably caution the owner to look into the problem. Wiped lobes-whether induced by tappets or not-will present as loss of power in the affected cylinder if they go far enough.

Continentals SID-05-1 gives shops and field representatives some general guidance on cam and tappet wear issues. It notes that minor wear and spalling is normal and doesnt require any action or inspection. It says spalling significant enough to cause damage to the cam is “rare,” but were not sure shops we talked with would agree with that claim.

We asked TCM if there have been any changes in manufacturing standards for either lifters or cams. There were none that TCM could point to or at least confirm. TCMs Loren Lemon told us a review of cam and tappet related warranty claims reveals minor spikes around 2003 to 2005, but the incidence has been trending downward since then.

TCMs recommendation is the standard drumbeat: frequent flights and frequent oil changes. Flights should be no less than 30 minutes in length and should raise the oil temperature to between 170 and 200 degrees F. TCM recommends oil change frequency of no less than four times a year, but it doesnt specify specific hours intervals. If oil analysis or filter inspection reveals suspect iron, TCM recommends removing the lifters for inspection, which also opens up the cam for inspection through the lifter bore. The cylinders dont have to be removed to perform this inspection.

We contacted Lycoming in mid-April for its view on the cam issue, but our query wasnt returned by press time. Lycoming faces an additional challenge, according to shops we spoke to, because its principle cam supplier, Crane Cam, recently declared bankruptcy and is reorganizing. Its not known if it will continue to supply Lycoming, in the long term.

Against this backdrop, we hear conflicting advice on what to do when specing a cam at overhaul. Better shops include a reground cam or new cam as part of the price. The factories dont like reground cams, ostensibly for service limit reasons but more likely because theyre interested in selling new ones. Our view is that if the shop stands behind the overhaul, follow its recommendations.

Tappets are another matter. Some shops dont like reground tappets, some do. Zephyrs Charlie Melot says he sees nothing wrong with reground tappets, but now uses only new ones because his engines are priced to include them.

“Im not going to sit here and say as the business gets tougher that I wont go back to using re-ground tappets. It may come to that. But for now, were priced to include new tappets in every engine,” he told us.

The dilemma is thus: If your tappets made it through one run, theyre obviously not defective and may make it through another. If you buy new ones, youre risking a bad part that could tank and take the cam with it. What to do? Frankly, we dont have a confident answer. Again, we would defer to the shops advice, since theyre the ones standing behind the engine.

As for minimizing the marginal conditions that might crump conforming cams and lifters, flight frequency might help. If that isnt an option, we recommend frequent oil changes and the use of CamGuard additive. We have repeatedly evaluated this additive and find that it has marginally better anti-wear and anti-corrosion properties than other oils. The difference is hardly night and day, but if its enough to keep that initial layer of rust from forming, it could save the engine from an expensive cam/tappet meltdown.