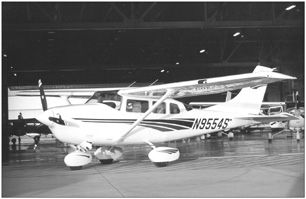 Like most owners, I like to get as much utility out of my airplane as possible so I fly my Cessna T206H on frequent business trips. And that means I have to confront icing for at least six months of the year, if not more. Although the airplane is turbocharged and will cruise comfortably in the flight levels, it was delivered from the factory with no de-icing option.

When I scanned the market for a solution to this dilemma, only one emerged: the TKS de-ice system offered by Aerospace Systems and Technologies, the U.S. distributor of the British-designed fluid-based ice protection system. In a nutshell, this system is expensive, represents a major modification to the aircraft and saps some payload. So the understandable question I had at the outset: will it work well enough to justify the cost? (Short answer: yes.)

AS&T has made some market inroads with the TKS system; its now available on quite a few airplanes, both new and as a retrofit. My airplane was one of the first new 206s to undergo TKS installation, although STCs exist for older 206s. In this article, Ill report on the results of the TKS install.

Basic System
A standard TKS system has two primary elements: titanium panels that are bonded to the leading edges of the wing and tail and a plumbing system that supplies TKS fluid to the panels. The titanium panels are laser-drilled with thousands of microscopic holes and the plumbing system, driven by an electric pump, delivers de-icing fluid to the panels. The fluid is glycol based and sticks to the airplane to prevent ice or to melt and dislodge any ice thats already formed.

The deicing fluid is forced by pressure through the tiny holes in the panels, providing deicing fluid that weeps through and over the titanium surfaces and runs back over the surfaces. Thanks to the run-back, TKS is the only system to provide run-back icing protection in severe conditions.

A complete TKS system includes panels for all of the leading edges, including the wings and struts, the horizontal stabilizer and the vertical stabilizer. It also includes a slinger on the prop, which distributes the fluid along the blades and, beneficially, over the windshield. In addition, theres a spray bar for the pilot-side windshield. A fluid reservoir is usually mounted near the baggage area, with the one or two pumps attached to the reservoir to pressurize the system. Theres a small control panel inside the airplane to monitor the system.

TKS is currently available by STC retrofit for the Bonanza, Baron, Commander 114, Aero Commander, Cessna 182, 206, 208 and 210, Mooney M20 series and the Socata Trinidad. Known icing is available for everything but the Bonanza, Commander 114, Aero Commander, C208, C210 and Mooney M20. The non-known ice systems are virtually the same as the known systems, save for a second, redundant fluid pump. Also, a factory TKS system is an option for the Cirrus SR22 and the new Diamond Twin Star. TKS is under development for other airplanes, including the Adam 500. The installed price for my 206 is $28,739 but other aircraft have different price points.

I first approached AS&T about ice protection for my Cessna 182 in 2001. However, when I discovered that the STC wasnt ready, I decided to trade up to a 206. At the time, all C206 models were approved except the newer H models, those manufactured after Cessna resumed production 1998. But approval of the H model was pending. Gleefully, I sold my 182, bought a T206H and waited for the imminent approval.

About a year later, the Brits finally finished with Cirrus approvals and began work on the 206 system; FAA approvals took more than another year. Finally, in late 2003, the STC was issued and I was number two on the waiting list. (I learned later that the owner ahead of me had been waiting for four years.)

Installation
The install requires three weeks at AS&Ts facility in Salina, Kansas, about an hours drive north of Wichita. AS&T also has a list of other approved installation shops, including one shop in Orlando, Florida for known ice systems (www.flightice.com) and another in New York. I moved the installation date a few weeks based on my work schedule and AS&T was accommodating.

When the appointed day arrived, I flew non-stop from my home near Washington to deliver the 206 to Salina for the installation. I returned via airline. Over the next three weeks, AS&T contacted me at least once a week with a progress report, including photos of the TKS installation. Then, as promised, my 206 was ready on the agreed-upon day.

At Oshkosh 2003, AS&T had a demo 206 with the TKS system and I had spent hours staring longingly at the system. I was distressed that the fit and finish on the demo wasnt especially good; it looked rough in spots. However, when I saw my airplane, I was ecstatic. The fit and finish were not just good but excellent throughout. I scoured the entire installation and couldnt find so much as missing bead of sealant.

The panel work for the TKS controls also met my high expectations. The control bar and circuit breaker had been installed exactly as I had requested and looked fantastic. Moreover, I closely inspected the interior and I only found two screws that hadnt been replaced according to my exacting standards. On the whole, it was a clean installation.

But, there were two squawks; both were addressed. First, when I departed from Salina, I found that my pitot static system didnt work. I returned to the airport and the AS&T mechanics discovered that they hadnt secured the system. Because the aircraft are not flight tested, no one had noticed until I departed. Second, during the install, someone dinged my newly painted nosewheel fairing, something that had happened before. The AS&T reps confessed to this transgression and covered the cost of the paint repair.

Besides being pricey, TKS also exacts a weight penalty, which was shown in my logbooks. Without fluid, the system adds 40 pounds to the aircraft empty weight. My 206 has a 7-gallon fluid tank which, when filled at 9.2 pounds per gallon, brings the total hit to 105 pounds. Thats no problem for my airplane, but some owners tell me they dont want to give up that much load capacity. One solution would be to carry less fluid and use it sparingly.

Results
The TKS control box on the panel offers two choices: anti-ice mode or de-ice mode. If you encounter icing conditions, you use anti-ice mode to coat the aircraft with the TKS fluid to prevent the formation of ice. If you wait too long or if ice overcomes the anti-ice mode, you select the de-ice mode, which pumps more fluid to shed the ice.

Because the de-ice system for the 206 is not certified for known ice, I didnt go out looking for ice to test the system. Soon enough, the ice found me. On a trip to Phoenix in March, 2004, I encountered icing several times while enroute, including over the Rockies. The TKS system worked as advertised.

In trace and light ice, the anti-ice setting was more than sufficient to keep the aircraft entirely ice free. In moderate to heavy ice, Im pleased to report that the de-ice setting worked, too, to my great relief. At one point, I was VFR on top above a layer over the Rockies and seemingly safe, but as so often happens, things turned sour and I got into thick clouds at 17,000 feet. I saw ice build fairly quickly but the de-ice setting cleared almost of it within 90 seconds. Interestingly, some ice remained affixed to the titanium panels in spots but this proved insignificant.

During these moderate to heavy ice experiences, I also noticed that theres little need to turn on the windshield deicing. At the high-pump de-ice setting, theres generally more than enough fluid from the prop slinger to keep the windshield clear.

As for cleaning, AS&T recommends cleaning the titanium panels with water or fuel or anything that cleans Plexiglas. Ramp rats always ask if Im worried about bugs clogging the tiny holes in the titanium, but AS&T says that the monthly priming will eject anything from the holes and Ive not had any problems. After all, there are about 800 holes per square inch, which means each one is the diameter of a human hair.

For me, the biggest pain with the TKS system is securing the fluid. When I returned to my home base at Manassas, Virginia, one FBO had never heard of TKS fluid and the other FBO had one 5-gallon container that they had for several years. After I bought the old fluid from the FBO, they declined to supply any more. Interestingly, as for the age of the fluid, one provider stated that its TKS fluid has a one year shelf life, but a different provider told me that its fluid was good indefinitely.

According to the AS&T Website, there are only three providers of fluid in the U.S.: Canyon Industries, Inc. in Eloy, Arizona, D.W. Davies & Co., Inc. in Racine, Wisconsin and Aviation Laboratories in Houston, Texas. I contacted each provider and found a dizzying array of choices from one gallon pails to 55-gallon drums and lots of sizes in between. One-gallon, 2.5 gallon and 5-gallon pails can be shipped via UPS, while 30- and 55-gallon drums are shipped by common carrier. Based on my survey, Aviation Laboratories generally offered the cheapest prices, with 2.5-gallon pails for $13 a gallon or a 55-gallon drum barrel for less than $7 a gallon.

The truth is, even if you fly a lot, you shouldnt expect to need gallons of fluid; a little goes a long way. My 206 has a 7-gallon fluid tank which is enough for 2.5 hours of continuous operation but much more if used sparingly. In the end, the best use of TKS is to buy time to extract yourself to an ice-free altitude, not slog through layers of moderate rime for hours on end. With that in mind, TKS is worth its weight in gold, in my view.

-Lionel Lavenue is an attorney and frequent contributor to Aviation Consumer. He bases his airplane in Virginia.