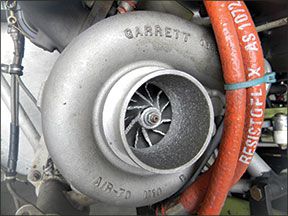 We admit it. We like turbochargers, turbocharging systems and the airplanes that wrap around them. More than just a tool for flying in mountainous regions—turbos provide the vertical agility for dealing with weather necessary in an airplane that is a vehicle for serious transportation. In the flat lands of the Midwest and Great Lakes, turbocharging often means going versus remaining parked when there is ice in the clouds. When going the distance, getting up to the high teens or low 20s means far more speed and efficiency than a normally aspirated airplane and the ability to select the best altitudes for the winds.

Our research indicates that the additional hourly cost of turbocharging is on the order of $25 per turbo, or a little more than 10 percent of the hourly cost of operating a high-performance single. Most of that is to allow for overhaul of the turbo at about 1200 hours—the rest for the more rigorous inspections required of the exhaust system and periodic adjustments to the full turbo system.

When correctly set up, operated properly and appropriately maintained, the systems tend to be reliable. The bottom line we got from pilots, mechanics and overhaulers is that your turbo system will thrive if you treat your engine well with regular oil changes and gentle power changes. The turbo itself will probably need to be overhauled at somewhere between 1000 and 1500 hours of operation, and the most likely problem you’ll experience is induction leaks—however, troubleshooting has to be done carefully to avoid throwing money at what may be minor problems.

Turbo Systems 101
Turbosuperchargers (a supercharger spun by a turbine in the exhaust stream), the technical term for what we call turbochargers or turbos—have been used in airplanes for an astonishingly long time. In 1920, an Army test pilot climbed to over 33,000 feet in a LePere biplane powered by a Liberty engine equipped with a General Electric turbocharger. Cessna brought turbochargers to general aviation in a big way, starting in 1962 with the model 320.

There is now one supplier of turbos for general aviation, Hartzell. It took over Kelly Aerospace, which had acquired the Garrett and Rajay line of turbos and developed a bad reputation for quality control. In interviews over the last year, Hartzell reps said that the company is addressing the quality control issue. Our conversations with mechanics and Gary Main of Main Turbo, one of the largest turbo overhaulers in the country, have elicited comments that they are watching to see if Hartzell does turn things around—it’s too soon to tell.

A turbocharger is nothing more than an air pump. One half is a turbine that lives in the horrendous environment of the exhaust system, its wheel being spun by the hot exhaust gases. The turbine wheel shaft extends through the center housing to the cold side, where it spins the pump that compresses ambient intake air and forces it into the induction system at higher pressure, allowing more power to be developed. To do its job, the turbo can spin at over 100,000 RPM.

Some wastegates are fixed—the pilot controls power with the throttle; some are manual—there is a second control in addition to the throttle, that the pilot must use in setting power. However, most are automatic—a controller senses the pressure of the air in the upper deck of the induction system, just upstream of the throttle body, and uses engine oil pressure to set the position of the valve in the wastegate to maintain the manifold pressure the pilot has commanded with the throttle. Properly adjusted, an automatic system requires no action by the pilot during a climb or descent—which is not the case with a fixed or a manual wastegate.

Turbo system problems are challenging to troubleshoot (see the sidebar on page 10). That’s because there is no instrumentation that directly reads out conditions within the components of the system—such things as RPM of the turbo or position of the wastegate valve.

When you discover that your system can’t make the promised manifold pressure at altitude, it doesn’t mean it’s time for a $2000 turbo overhaul. According to Scott Utz, Director of Maintenance at Arapahoe Aero on Denver’s Centennial Airport, turbos hold up quite well—most of the time the problem will be something other than the turbo. One of the most common is simply a leak or leaks in the induction system. It’s not difficult to check out and fix. Another common problem is an alternate air door that doesn’t completely close—another easy fix.

Routine Maintenance
Utz pointed out that routine, preventive maintenance that keeps the engine happy is good for the turbo system as well. Keeping the air filter clean is good in general—on a turbo something as basic as a dirty filter means less air into the compressor, resulting in lower manifold pressure at altitude.

Even with the impressive metallurgy and high-temp alloys used in their manufacture, the environment in which wastegates live mean that they sometimes fail. According to Utz, the valve may warp or the shaft become loose and the wastegate can develop a mind of its own. Mike Busch, whose Savvy Aircraft Maintenance Management company manages over 500 general aviation airplanes, told us that wastegates can also get sticky as lubricating oil cokes around moving parts. Both he and Utz said that wastegates may have to be pulled and repaired or overhauled from time to time. Depending on the installation, that can run from $500 to $1400.

Otherwise, turbos do wear out and lubrication lines get plugged with coked oil—the result of the heat and speed at which the wheels are turning. The question becomes, when overhaul or inspect and replace as necessary (IRAN). Realistically, IRAN is rarely the right answer for a turbo. Unless it’s very low time, repair is seldom possible because of the effects of heat on the components, according to Gary Main.

Depending on the model of the turbocharger, overhaul will run $2000 to $2200. Gary Main told us that if you give his shop a little advance notice, his folks can have your turbo overhauled and on its way back to you in a week. If time is tighter, overhaul exchange turbos are about 10 percent more expensive.

Operation
The good news is that the same principals you apply in carefully operating your engine will pay dividends for turbo longevity—no rapid power changes, allow the oil to warm up prior to takeoff and change the oil on a schedule that reflects hours of operation as well as calendar time.

The bad news is that there are a couple of misconceptions about turbo system operations among pilots, and they may be reducing turbocharger life.

First, our research found that a lot of pilots assume that the turbo is not spinning during low-power operation, such as on landing or during taxi. That is incorrect—there is always some exhaust gas going to the turbo; an automatic system closes the wastegate on engine start, so all the exhaust gases are routed into the turbine.

Overshoot
Because oil pressure controls the wastegate on automatic system, it’s not unusual for the manifold pressure to overshoot—exceed redline—on the first takeoff of the day if the oil is still cold. The system is just sluggish. There is a popoff valve that should open to stop the manifold pressure from exceeding more than a few inches above redline and damaging the engine. It’s not a good idea to rely on the popoff valve—monitor manifold pressure on takeoff and stop it at redline if it shows any evidence of going over.

Properly adjusted, with warm oil, the controller will hold manifold pressure at redline at full throttle. With a fixed or manual wastegate, the pilot has to set power—and because it takes a few moments for the turbo to spin up from its relatively low RPM during taxi and runup, the manifold pressure will lag behind throttle movement.

Experienced pilots learn to stop throttle movement at some point below the target manifold pressure. Overshoot increases with takeoff elevation—we’ve seen it exceed 15 inches of manifold pressure on a takeoff from Leadville, Colorado, in a Turbo Arrow.

In cruise, back off a bit from a power setting that generates maximum Turbine Inlet Temperaure (TIT). Turbo overhaulers and mechanics told us to back off at least 20 degrees to extend the life of the system, be it lean or rich of peak.

If possible, make gradual power reductions in descent. We’re still not convinced that shock cooling is real. However, Gary Main of Main Turbo and the mechanics we spoke with said that they are convinced that rapid cooling hurts turbos.

On approach, keep in mind that once the power comes back a ways, the wastegate will be closed and all exhaust gases are exiting through the turbo. Gary Main told us that the turbo has to have time to spin down and cool off prior to shutdown.

At shutdown, the oil flow ends and a hot turbo will coke the oil in the unit, eventually plugging oil galleys and leading to turbo failure. Gary Main gave us the example of a freight outfit that uses Navajo Chieftains and that goes through turbos at low time. He commented that they seem to carry high power until close to the runway, then chop the throttles, land, taxi a very short distance and shut down.

Many POHs call for a five-minute idle spooldown time after reaching parking. The purpose is to cool off the turbo. However, research performed on a Cessna Skymaster and, more recently by GAMI, produced the not surprising information that the turbo is the coolest it is going to get just after touchdown on landing—unless there’s been a high-power approach and chopped throttle.

The turbo then heats up during taxi in. The conclusions were that—unless you approach at high power, chop the throttle and then taxi a very short distance—by the time you reach parking, the turbo has spooled down to an RPM suitable for shutdown, and it’s not going to cool off any further. Don’t keep idling.

Conclusion
After 50 years in general aviation airplanes, we believe turbochargers have proven their worth and reliability for pilots who want to use their airplanes for more than just recreation. The operating cost delta over normally aspirated engines is about 15 percent.

They don’t require any extraordinary care beyond what you would do to properly operate the engine. However, when there is a problem, failing to carefully troubleshoot it can send costs skyrocketing if a mechanic just starts replacing parts. And—despite rugged design and impressive metallurgy in construction, conservatively figure that you’ll need to overhaul your turbo once in between engine overhauls.