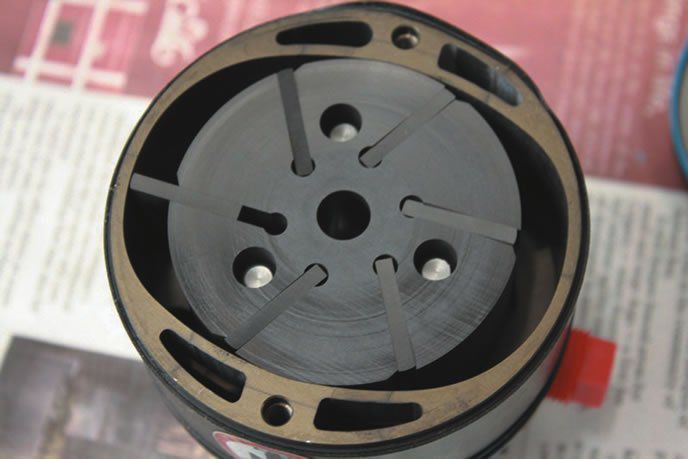 While glamorous glass cockpits are probably the wave of the future, in the real world the vast majority of airplanes still sport round-dial panels with gyros spun by air pumps that either suck or blow. We tend to collectively call them vacuum pumps, although on most Beech aircraft they are pressure pumps. No matter the appellation, they are turned by the accessory drive of the engine.

We only seem to pay attention to the air pump in our airplane when it fails—and unless we have a low vacuum annunciator light on the panel, we may not notice for some time, which can have ugly implications as the air-driven gyros spool down. After a spate of loss of control accidents in the 1980s blamed, at least in part, on inflight, in-clag failures of air pumps, a lot of attention was paid to that accessory and much effort went into improving their reliability. From what we can see, the efforts were successful, at least in part.

Nevertheless, when an air pump fails, it’s almost invariably in flight. As aircraft owners, what can we do to extend the life of our vacuum pump and what are our options when it’s time for replacement?

Vacuum pumps were developed in the late 1930s—prior to that air-driven gyros were spun by suction from a venturi attached to the side of the fuselage. That meant the gyros didn’t even start spinning up until sometime well into the takeoff roll, making low-altitude entry into the IMC more than a little sporting. A vacuum pump solved that problem, and gave more suction than a venturi could provide. The first pumps were “wet,” the interface between the carbon vanes and the interior of the metal housing or stator of the pump was lubricated by oil.

Wet pumps proved reliable, usually lasting through TBO of the engine. The downside to that was they were relatively expensive and because some small portion of the oil lubricating the vanes constantly exhausted overboard with the air being pulled through the pump, they left a fine mist on the belly of the airplane. While the amount was often small compared to leaks in the engine itself, there was a perception they were messy and some owners paid for an add-on air-oil separator to return the exhausted (and potentially contaminated) oil to the engine—something we don’t recommend.

Dry air pumps debuted in the 1960s and effectively put wet pumps out of business. Lighter and about half the cost of wet pumps, dry pumps used vanes that were made of graphite, which provided lubrication by slowly erasing themselves and leaving a fine layer of dust between the vanes and stator.

The downside is that the thin rectangular vanes (usually six), which move freely in the slots of the central rotor and are held against the stator by inertia as the rotor spins, will eventually wear down to the point where they are too small to stay in position. One will then break into pieces and the pieces will rapidly destroy the rest of the vanes (and rotor), causing catastrophic failure of the pump.

Because of the nature of the design, there is no warning of impending failure—vacuum pressure does not drop as the vanes wear.

Most dry pumps have a carbon or graphite rotor and graphite vanes. Because those materials remain dimensionally stable with temperature changes—and air pumps get very hot in operation—they are excellent for operating efficiency. The tradeoff is that a small piece of foreign material or any liquid can have devastating effects. In our interviews of pump makers and maintenance shops, a common theme we heard about dry pump life was the need to do some preventive maintenance to allow them to last as long as possible.

When washing the airplane and engine, make sure no liquid gets into the pump—it will turn the graphite dust to paste fairly quickly and destroy the pump. Teflon tape should not be used on pump fittings, pieces break off and get into the pump. The vacuum system filters should be replaced at the annual or at 500 hours (main filter) and 100 hours (other filters) of service, whichever comes first.

We learned that one of the most common cause of pump failure is FOD from the vacuum system hoses located under the instrument panel. Scott Utz, president of Arapahoe Aero at Denver’s Centennial Airport, said that his shop often sees 30- and 40-year-old airplanes that have never had the vacuum system hoses behind the panel replaced.

If the filters get plugged, the pump has to work harder and fails sooner. Utz told us that if you suddenly start having air pumps fail, the problem probably lies in the system, not with the pump. On de-iced airplanes, it’s not uncommon for the regulator valve to malfunction, causing a constant load on the air pump, which can dramatically shorten its life.

One of aviation’s old wives’ tales is that you’ll wreck your vacuum pump if you move the prop backward. Fortunately, that’s not true. While most vacuum pumps are unidirectional—they either turn clockwise or counterclockwise in service based on the direction of rotation of the accessory shaft on the engine (and have CC or CW as a suffice to their model number)—it takes more than a few turns in the wrong direction to cause damage.

Vacuum pumps come in two sizes, and are referred to as 200- or 400- series. A 200-series pump will run two gyros—that’s it. If your airplane has anything more than that, such as an inflatable door seal, copilot gyros and/or de-icing boots, a 400-series pump is necessary.

One of the smartest safety developments in the world of dry air pumps has been the viewing port invented and patented by Aero Accessories for its 200-series Tempest line of air pumps. Removing a small screw allows you to look into the pump and see how long the vanes are—and how far they’ve worn down. A published wear guide

describes when it’s time to take the pump out of service and have it overhauled or replaced. Tim Henderson, owner of Aero Accessories, told us that he felt that the wear indicator port (WIP) was an important safety development for dry pumps, so his company licensed the patent to other manufacturers for well under $10 per pump—in our opinion a very low royalty price in the world of aviation.

We strongly recommend that if you are buying a 200-series dry rotary vacuum pump, new or overhauled, it should be one with a wear indicator port. While it will not protect against pump failure due to FOD, it will let you know when it’s about to wear out and fail.

Wet and dry air pumps can be overhauled by specialty facilities or most manufacturers (not in the field). In general, overhauled units are less expensive than new ones, but come with a shorter warranty. We do not have recommendations one way or another except for de-iced twins. Because 400-series pumps do not last as long as 200-series, the de-icing system places a significant load on the pumps—further cutting into their life expectancy—and because overhauled pumps are less expensive than new, we think it makes sense to go with overhauled pumps in that application.

Aero Accessories began overhauling dry pumps in 1987. Shortly after 2000, it came out with its own Tempest line of 200- and 400-series pumps. Tim Henderson told us that the idea of not being able to inspect a pump and running it to failure made no sense to him; it was too much like running a tire until it burst. As a result, he came up with the wear indicator port now available on most 200-series dry pumps. In addition, the Tempest line of pumps incorporates cooling fins that double the surface area of the pump housing, allowing it to run cooler, lengthening its service life. The company also spent a great deal of time redesigning the complex series of curves on the inside of the stator so that the vanes travel outward slower than inward and they remain loaded in compression at all time, minimizing bending loads.

Henderson said that historically, one of the worst culprits for pump failure was oil leakage into the front of the pump. That area was redesigned so that any oil leaking around the engine accessory drive seal drains overboard and not into the pump—which caused oil-related failures to drop by a factor of 20, according to Henderson. Finally, the rear portion of the case was redesigned so that it will not shift and potentially bind the rotor should someone working on the engine inadvertently grab onto and pull or push the vacuum pump.

Henderson told us that the life expectancy of Tempest 200-series pumps has gone from 600 hours to the 700-800-hour range. It’s slightly less for 400-series pumps.

Rapco began overhauling dry air pumps in 1981 and now offers a full line of new and overhauled pumps, along with a number of other products for general aviation aircraft. Mike Gaulke, director of sales, told us that as the company shifted from simply overhauling existing pumps to making new ones, it continuously improved the pump design and life with such features as an oil seal on the main shaft to reduce the risk of oil contamination and an inspection port to observe the condition of the vanes. He also pointed out that by placing the vanes at an angle—which requires that the pump turn only in one direction—they can be made longer and thus last longer than if they are perpendicular to the stator/pump housing.

Sigma-Tek takes a slightly different approach to a dry air pump—while theirs can be used for suction or pressure, it is nonetheless bidirectional—it can be mounted on any engine, no matter which way the accessory shaft turns.

The pump uses an aluminum rotor and stator with carbon-carbon composite vanes that are designed to wear more slowly than graphite vanes. They are mounted perpendicularly to the stator, allowing rotation in either direction. According to Sigma-Tek, the aluminum rotor makes the pump more resistant to FOD or engine oil. It is not designed for supplying air to de-icing boots.

The warranty is for two years or 1000 hours of operation. We did not see any indication that anyone is overhauling and selling the pumps. We saw prices, new, as low as $629.

When you need to replace a vacuum pump, there’s a wide selection available, new and overhauled. Dry pump quality and life has improved, and we like the wear indicator port that, we think, will help determine when to replace the pump before it fails. If you have use a dry air pump, proper maintenance of the vacuum system is essential, including regular hose and filter replacement. No matter what sort of pump you have spinning the gyros, we think it’s wise to have some a satisfactory backup that will allow you to keep the airplane upright when the pump goes out—because at some point, it will.

Care And Feeding And Figuring Out What’s Wrong 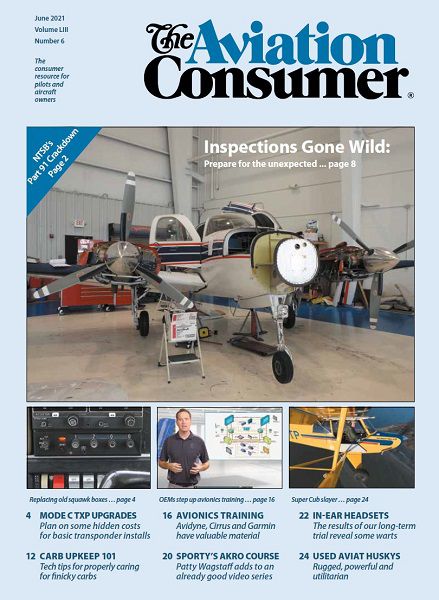