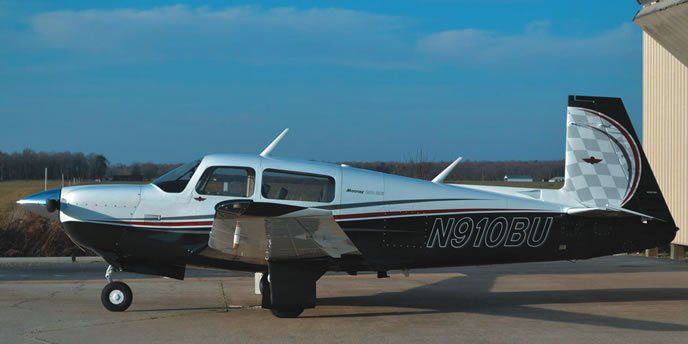 That’s what we asked leading paint shops and Craig Barnett at Scheme Designers, a popular aircraft graphics designer that works with both aircraft paint and vinyl designs.

Barnett confirmed our suspicion that vinyl graphics work better on smooth, fiberglass finishes. That makes sense, given the added complexity and challenges that surface rivets and screw heads create during the application process.

“Vinyl graphics designs are handled differently from painted designs. For example, pointed stripes need to have the points into the wind rounded for proper adhesion, and one has to design wraps very carefully to ensure they work properly on the aircraft. I keep vinyl away from excessive heat areas and from oily or sooty areas,” Barnett said. He noted that Scheme Designers has done many vinyl graphic designs for riveted aircraft, all with good results, but definitely not as good as painted graphics.

The folks at Hawk Aircraft Painting in Tampa, Florida, concur. Hawk’s Joe Dinolfo told us of the problems his shop witnessed with OEM vinyl on later-model Cessna single-engine airplanes. “We ended up removing the decals from more than a couple of these new airplanes because the material just doesn’t adhere well around the rivets. Dirt, water and other contaminants get under the material and it can end up peeling off,” he said.

Even the best technicians might not be able to get the vinyl to adhere over rivets and screw heads. One tech said he’ll often trim a portion of the vinyl away if the tip of a stripe happens to end on a rivet head because inevitably, that portion of the stripe will lift up and peel back.

Sometimes it’s about status. Unless it’s a model that originally had OEM vinyl graphics, don’t be surprised if you take a hit when it comes time to sell the airplane. In the world of high-end refurbished aircraft, aftermarket vinyl accents are considered a shortcut.

“We look at vinyl makeovers as a two-year solution. A real paint job could last 20 years,” said Matt Kozub from Ohio-based Aircraft Sales, Inc. He markets the Pristine Airplanes total refurbishment process where every aircraft sold gets custom paintwork. Kozub said that for some models, vinyl can affect resale value.

Last, if you commit to a full-up paintjob, include painted graphics. Scheme Designer’s Barnett advises if you are having an aircraft stripped and repainted, it is far more effective to add the design in paint. “A quality paint job will far outlast the vinyl, especially if the aircraft is kept outside. Because of the cost of installing and buying the vinyl design, there is no great savings doing new base paint and finishing it off with vinyl,” said Barnett.