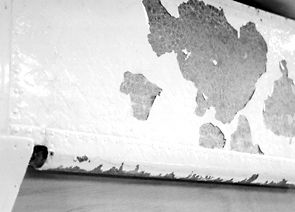 When were airplane shopping, not many of us buy new models so were stuck making our picks from an increasingly older fleet. Youd think that a 30-year-old airframe flown a couple of hundred hours a year would be tapped out but most arent.

Yet many are corroded almost to the point of being unrepairable. Increasingly, in doing annuals and pre-buy inspections, were finding instances of serious corrosion undiscovered in previous inspections and, occasionally, hidden beneath a quick fix of primer and paint. This is becoming tricky business for buyers. You might very well negotiate a sweet purchase price on a nice airframe with reasonable time and decent paint and avionics only to discover months later that it needs $20,000 worth of corrosion repairs.

Better to find that out before closing the deal than after. And if you do find it, tread very carefully in negotiating the price downward to pay for fixing the rust. We often find that in disassembling structures for corrosion repair, the damage is worse than we expected.

Flying is Better
The accepted wisdom has always been that airplanes wear out more from sitting than from flying and judging by the number of corroded ramp queens weve seen, we would have to agree. At least flying the airplane airs it out, driving the accumulated moisture out of the places where it can do the most damage. Regular flying is also good at preventing another kind of expensive corrosion, the sort that ruins an engine.

According to the FAAs current fleet census, the average GA aircraft is expected to remain in service some 43 years and when you examine production figures, the bulk of the current owner-flown fleet was produced prior to 1982. While many designs may have had alodine, zinc chromate or similar treatments to stave off corrosion, long-term corrosion resistance has not been a top design priority.

Aircraft are designed with certain fudge factors in mind structurally. Typically, that means most individual components are overbuilt by a minimum of 10 to 15 percent, and often much more.

Corrosion comes in several varieties but generally, FAR 43.13 says that when corrosion eats into 10 percent of the original thickness of the metal component involved, it must be repaired or replaced.

Frequently, this is difficult for shops to determine because they dont have the equipment necessary to measure the extent of corrosion penetration. So they take the easy if not cheap way out; the affected component is simply replaced.

However, besides doing an FAA-approved field repair, another approved procedure is to return the aircraft to service via OEM data-if it exists-or to have an FAA designated engineering representative report outlining an alternative method of repair or replacement.

The inspecting A&P/AI determines if the specific corrosion damage is at or exceeds 10 percent of the original thickness. If its greater, besides arresting the corrosion itself, he must ultimately determine what replacement or repair procedure should be done. If, for example, a spar cap or web is corroded, an internal patch or repair may be practical. If a skin corrodes, say around a rivet or lap joint, the only practical solution may be outright replacement of the entire skin.

Total Losses
As the fleet ages, we see more total losses due to corrosion alone. When an aircraft is declared a total loss, typically after an accident, the usual rule of thumb with insurance adjusters appears to be to total an airframe whose repair costs come to 60 to 70 percent of the insured hull value. In such cases, the insurance company figures its better to pay you off in full and then sell the airframe for salvage.

Usually, when selling the salvage aircraft to boneyards, a good rule of thumb is that the value of GA aircraft hovers around the street value of the installed avionics, cockpit instruments and accessories that can be easily removed for quick cash.

The remainder of the airframe as well as the engine and its components becomes clear profit for the salvage yard operators as they part it out over time. Using these numbers, it makes sense to scrap an airplane when the cost of corrosion repairs approaches 50 percent of the airframe value.

While this decision may be painful, it may make sense economically because your airframe wont have suffered collision damage and will thus have plenty of serviceable parts to sell.

Another phenomenon we see with resourceful-perhaps desperate-owners is buying another similar scrap aircraft and making two into one. While this may seem expensive and time consuming, it may make good economic sense, especially if the purchase price for the scrapped airplane is relatively low, as it should be, since you need neither the radios nor the engine.

Look Ahead
Before considering anything other than minor corrosion repairs, you should carry your ownership timeline forward. You need to think realistically about resale value.

While a simple and FAA-legal external or internal corrosion patch will do, long term, it may better support the resale value to simply replace the part in question, if thats possible. Besides the obvious appearance problem, future buyers are nearly always hesitant to consider aircraft that have patch repairs on major structural components such as spars and primary fuselage structures, as well they should. Every smart buyers pre-buy inspection will mean a thorough examination of the affected areas, including dissecting the workmanship and materials used, as well as what was done to arrest the corrosion elsewhere.

Once an airframe is diagnosed with serious structural corrosion, many buyers will shun it no matter how well the repairs are done, unless outright replacement of all the damaged components has been documented and OEM guidelines were followed. Again, this is just savvy buying strategy. You might get a good deal on an airframe with corrosion repairs but its just as likely youll buy into a disaster.

Desert Creampuffs
Obviously, aircraft stored outdoors and in warmer, humid areas are at greater risk of corrosion than those hangared or kept in arid areas. Doubly at risk are aircraft that tend to sit outdoors in high-humidity bottomlands, at seaside environments or those stored near heavily-industrialized areas in the northeast and midwest. If you think aircraft operating in Arizona or Utah are totally safe, youd be wrong. Our shop recently inspected a 1992 Mooney which had exfoliation in its 7606 T-6 spar cap so severe that it required the wing to be removed and disassembled. A new spar cap was installed to the tune of some $28,000. If this airplane was 20 years older, it would have been a total loss.

Although it was based in the arid southwest and always hangared, exhaust fumes had been allowed to enter the belly area, which provided the catalyst for the corrosion on the spar. Further, it had never been fogged with any form of corrosion proofing. This illuminates something that many owners dont understand: Not all corrosion is caused by solely moisture. A major factor in many spot cases of severe corrosion is bird and vermin infestation. Weve seen several aircraft which otherwise looked showroom perfect totaled or nearly so once we uncovered mice or birds setting up housekeeping somewhere in the airframe.

Both leave behind deposits which eat away aluminum at an alarming rate and can quickly penetrate the 10 percent thickness barrier.

Components made of magnesium-such as control surfaces on Beechcraft products-are far more susceptible to corrosion than ordinary aluminum. Once corrosion starts on such parts, you can all but watch them disappear into dust. Aggressive, regular preventive maintenance is a must. Generally, corrosion on skins, lap joints and areas under and around rivets are areas that trap moisture and contaminants and thus corrode first.

Prevention
When most of todays airframes were built, there were few products available to prevent corrosion. Sometimes simple paint itself was the only practical barrier available but paint can-and does-tend to conceal corrosion and can even allow it to flourish undetected underneath. Tremendous strides have been made in practical compounds which can be applied to an airframe to prevent corrosion. These are widely marketed so its easy for shops to obtain and apply them. All the owner has to do is give the nod and pay the relatively small invoice.

Anti-corrosion fogging makes so much sense that unless your zip code takes in the Mojave Desert, theres simply no excuse for not doing it on a regular basis. What product you use is your and your technicians choice, but there are several to choose from, as noted in the sidebar. Weve tested them all and find that all are effective.

In some ways, corrosion is like cancer and as with cancer, the key to protecting against it is twofold: early detection and aggressive preventive maintenance. Once corrosion takes a foothold, it can spread rapidly without your suspecting anything is wrong.

For the sake of aircraft value enhancement, we strongly recommend that you make sure the shop doing the work provides log entries of all anti-corrosion measures so a wary buyer can be put at ease.

If you encounter corrosion in your airframe, dont automatically opt for a patch repair. It may be cheap but more costly in the long run, if it scares away potential buyers or drives down resale price.

Last, when considering an airplane for purchase yourself, make sure the pre-buy includes a review of the logbooks for a corrosion prevention program. Not too surprisingly, many airplanes wont have had any treatment at all.

That doesnt mean theyre shot through with rust but theyre candidates for a careful inspection, especially of major structural components such as spars, spar caps, wing and control skins and the like. Evidence of any but the most minor corrosion is grounds to walk away from the deal.

And if the airplane turns up clean and you deem it to be a good buy, you know what to do: Keep it that way with anti-corrosion treatments.