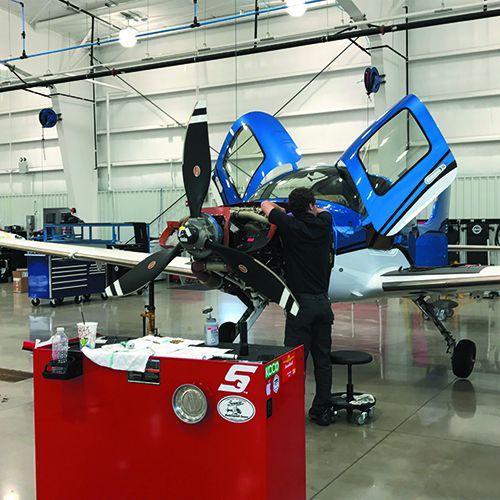 The article in the November 2019 Aviation Consumer on the new Phillips Victory aviation oil prompted lots of letters from readers asking how they might choose the perfect oil for their engines.

There isn’t a one-blend, across-the-board pick, of course, but I can offer a straightforward guide for a logical decision-making process. Let’s start with some nonsense, shall we?

TOO MUCH OF A GOOD THING? NOT

The horsepucky meter pegged when I got a note from reader Ross Oliver who asked me to backstop some odd advice he got from his service parts and engine oil supplier in Alaska. The harsh conditions in which Oliver operates his Cessna Skylane should be obvious, and after talking with his parts supplier he was in a quandary about which oil blend to use in his Continental engine.

“My local parts house recently told me that its AeroShell representative advised against using the CamGuard product with its AeroShell 15W-50 oil because it was too much of a good thing for my 182’s engine,” Oliver said.

To review, the CamGuard oil supplement product mates corrosion protection with additives for anti-scuff, deposit control and the conditioning of seals. This magazine has favorably evaluated the CamGuard product over the years, and field reports from users and shops have supported the conclusion. In my opinion, I think the Shell rep’s remark sounds like marketeering, devoid most likely of technical content. We reached out to the company for further explaination multiple times, but it didn’t respond.

Without explanation, I have to assume that Shell has not provided its reps with any technical background on CamGuard. And no, in my view CamGuard combined with AeroShell is in no way too much of a good thing. On the other hand, if you’re buying CamGuard, you might question paying the premium for AeroShell multiviscosity, particularly since it contains TPP (once called TCP) which is not a good thing for your engine, since the Lycoming AD doesn’t apply to this engine. The supposed benefits of TPP are provided by the CamGuard formulation. Consider using the less expensive but fully functional Phillips 20-50, or its straight-weight oil, if you prefer (same price). Here are some other questions and comments we fielded.

I want to use TCP/TPP to protect my engine against corrosion.

TPP doesn’t provide that protection. When in the oil formulation, it provides an extreme pressure anti-scuff action when the camlobe bears down on the tappet body. But once the engine shuts down, there’s no corrosion-impervious barrier provided by the TPP. If you fly less often than twice a week, and do not use an engine dehydrator, you are going to want some anticorrosion protection.

AeroShell offers some protection in its formulation; Aviation Consumer’s previous evaluations showed that CamGuard’s protection is even more robust. Consider adding CamGuard. But, gather your own data. If you normally fly every week or two, then after two weeks of downtime avoid turning the prop, pull the top plugs and use your buddy’s borescope to check for cylinder wall corrosion. Unfortunately, if you have chromed cylinders, this won’t tell you much—the tappets could still be rusting. And even if you have a Continental, it’s a bit invasive to pull a tappet for a look-see. If you have a Lycoming, nobody has quite yet figured out how to borescope or otherwise see a tappet face without pulling a cylinder.

I could relate to the mention in your article about the phosphate forming on the spring in the starter adapter on Continental engines, as I personally experienced this. I used to be a partner in an old Stinson with a Continental O470. After doing an oil change with AeroShell 15W-50, we started experiencing starter slippage. This engine had about 1200 hours and 25 years since overhaul at the time. Our mechanic blamed it on the semi-synthetic AeroShell, so I changed oil back to the Phillips non-synthetic and the slippage stopped.

It was most likely not the synthetic in the oil blend, but as you noted, the TPP (aka TCP).

I have only had the Cessna 182 for two years, but my flying seems to be about 80 hours per year, so I have been doing oil changes at about six months, which is always less than 50 hours between changes. You made an interesting point in your article about TPP being less stable than TCP, so Shell used a copper corrosion inhibitor to limit copper attack, but the phosphoric acid continues to attack seals and magneto cushions. I presume this issue is unresolved, suggesting that I should avoid AeroShell 15W-50 to avoid this problem (since I don’t need the Lycoming anti-wear additive). If this were your engine, what would you put in the sump? AeroShell 15W-50 with no additional additive, Phillips X/C 20W-50 (without the Lycoming additive) with CamGuard or some other brand/combination?

I concur with not using AeroShell 15-50 in your engine. I use Phillips 20-50, plus CamGuard, in my own Lycoming.

Do I really have to change the oil filter at every oil change?

Well, you don’t have to do anything except die and pay taxes. But it’s wise to change the filter at every change, and cut it open to check for debris. Otherwise, you’re leaving a quart of worn, dirty oil in the engine, reducing the effectiveness of your oil change by about 10 percent. And you’re missing a great opportunity to perform due diligence on what’s happening in the bottom end, in terms of evaluating oil filter debris.

When Lycoming announced it was reformulating the additive from TCP to TPP, I smelled a rat! I bought up all the old-style TCP additive I could find, and have been using that on my H2AD (aptly named) engine ever since. But, my supply is almost exhausted. What now?

Aren’t you the enterprising guy! Have you done the engine modification to improve the tappet face? If your 172 is used for training and flying every day, utilization may well be high enough that the rationale behind the AD doesn’t apply to your operation.

In any event, I can’t in good conscience suggest you ignore the AD. You could apply for an AMOC (alternative means of compliance) citing utilization, and proposing mitigations when/if utilization declines.

What is a VII molecule like and how does it work?

There are a number of different chemistries used, but the historical explanation was that the polymer uncoils as the oil warms, increasing viscosity compared to non-additized oils. There’s additional alternative explanation of the mechanism now (see the scholarly paper at tinyurl.com/qumubj4), but the effect is the same.

As the oil warms, the VII acts to slow the thinning of the oil, providing better lubrication at operating temperature, while preserving good flow and pumpability properties at low-temperature starting conditions.