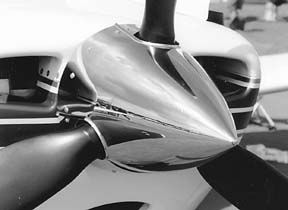 Forget the polished aluminum, why not just chrome the spinner and shine on permanently? Because the FAA says you cant and occasionally grounds airplanes with chromed spinners.

The ostensible reason is that the plating process embrittles the aluminum and, in any case, theres no FAA approved chroming process for spinners. Yet there are plenty of chromed spinners flying and we havent been able to lay our hands on any direct reports of plating-induced failures.

One plating expert we interviewed-a shop that plates lots of aircraft parts-told us the embrittlement issue, if true at all, is largely overstated and is neither a durability nor a safety issue. Alcoa, which makes the raw material, says it knows of no data supporting the embrittlement/failure claims.

The legal issue-if there is one-appears to be this: Propeller manufacturers strongly recommend against-but dont specifically prohibit-chrome plating of spinners and neither Hartzell nor McCauley authorize any repairs or modifications to their metal spinners. But they do allow painting of spinners. So if painting isnt a modification, why is chroming?

Problem or Not?
So whats the beef with chrome on aluminum spinners? Supposedly, during the plating process, the metal absorbs atomic hydrogen, causing it to lose some of its ductility and thus become brittle and more susceptible to cracking and failure.

So-called hydrogen embrittlement is well documented in the high-strength steel fastener industry, where fasteners are sometimes plated to improve corrosion resistance. Failures due to embrittlement, while not common, are hardly unknown. The usual fix is a post-plating oven treatment to drive off the hydrogen.

Poorly documented or not, some FAA inspectors have taken it upon themselves to rid the world of chrome spinners. We dont know how often this has happened but we did track down one owner whose airplane was grounded by FAA inspector Thomas Miller in Bessemer, Alabama last September. Rather than pursue the issue in the courts, owner Jack Connor relented and replaced both spinners at a cost of $1350.

It was the most ludicrous thing Ive ever seen in my life, Connor told us.

We contacted Miller to ask about the legal basis for this grounding. He told us guidance from the Atlanta regional office suggests that chrome spinners are a safety hazard, due to the risk of embrittlement-induced failures. Yet the Atlanta office provides no technical data on embrittlement and Miller admitted he knows of no failures definitely caused by plating-induced embrittlement.

He told us he has issued condition reports on about 15 aircraft, asking the owners to produce evidence of an FAA-approved process for chroming spinners. None have and all of those spinners have been removed, according to Miller.

Prop Makers Say No
We checked with Hartzell and McCauley-the two major manufacturers of propellers and spinners-and both have essentially the same policy. Both strongly recommend against-but do not specifically prohibit-chrome plating spinners.

A spokesman for Hartzell told us the company performed tests with nickel-plated spinners and encountered cracking due to embrittlement. Chrome, he said, causes yet more embrittlement and Hartzells concern is that its even more susceptible to cracking.

Neither Hartzell nor McCauley could refer us to any specific field history with cracked or failed spinners and the strong evidence seems vague at best. Neither company has technical data on the subject. However, worth noting is that cracked spinners are supposed to be replaced not repaired and many may have been without either company knowing about it.

The legal hook is the no modifications or repairs clause found in documentation from both companies. Although dents are considered serviceable, neither McCauley nor Hartzell allow cracks to be repaired via stop drilling, welding or patching. Replacement is the only option.

Presumably, chrome plating is a modification and is thus not permitted. But what about painting? Its a modification, too, and nobody is beefing about painted spinners. (McCauley specifically provides both polished spinners and satin finish spinners intended for painting.) We think the legalities of chrome plating a spinner are a gray area at best and, in our view, FAA inspector Millers grounding of Jack Connors Baron is an example of the selective enforcement the agency is often accused of.

What Problem?
At Sun N Fun, we visited the booth of Spacecoast Plating, a Melbourne, Florida plating house that does general decorative chrome plating for the automotive and motorcycle trade, including a fair amount of aircraft work. (Contact 321-254-2880 or www.spacecoast-plating.com)

Spacecoast had a couple of nicely chromed spinners on display, including one on shop owner Dave Pratts Comanche. Although Pratt tells us he doesnt necessarily push chrome plated spinners, he also doesnt turn the work away if a customer requests it. Obviously, he doesnt buy the embrittlement argument. The whole thing about hydrogen embrittlement is that its a theory thats never been proven or disproven, at least for aluminum, Pratt told us.

Pratt argues that the baths used for chrome plating arent hot enough to cause significant embrittlement, if they cause any at all. And if the metal is embrittled through chemical reaction enough to matter, Pratt says he would have seen failed spinners by now and would have ceased offering the service.

Alcoa doesnt dispute this. Sources at the company told us that no reliable data exists supporting claim that plating causes the aluminum to turn brittle but that the chrome surface treatment itself, if applied incorrectly, may flake off, crack or blister. If the aluminum substrate is compromised, no one can seem to prove it. One reason chrome has gotten a bad rap, says Spacecoast Platings Pratt, is that some of it has been done poorly and fails in a few years. A properly plated spinner should last for years, says Pratt.

Properly plated, says Pratt, means a multi-step process that includes a nitric acid cleaning bath, hand polishing to remove any surface defects and a nickel-copper-nickel substrate treatment before the final chrome treatment is applied. Some shops which advertise nickel-chroming actually skip that step, causing the chrome to adhere poorly.

Pratt says Spacecoast Plating charges $180 to $200 to chrome a spinner for a typical single-engine aircraft; a bit more for larger spinners used on twins. As a final step, the spinner is degaussed, making it magnetically indistinguishable from a polished spinner.

We asked about the gray-area legalities of chrome spinners. Pratt says thats between the owner, his mechanic and the local FAA. Im not an FAA repair station. I have the legal right to plate anything that comes in the door. If its an aircraft part, its up to the owner to make sure its airworthy, says Pratt.

To be squeaky clean, that might mean filing a Form 337 with the local FSDO, something that we suspect would ignite a tempest that would ultimately lead to a disapproval.

Indeed, another plating shop we spoke to said it tried to develop an approved plating process for spinners but gave up due to FAA footdragging. If this sounds like were suggesting that all those chrome spinners flying around out there dont have Form 337s approving the modification, thats exactly what were saying. Some appear to be original equipment, leading us to conclude that an approved process may have existed at one time or that these spinner were chromed when the FAA operated with more common sense.

Conclusion
Although were reluctant to ignore the cautions from Hartzell and McCauley, given field experience, we remain unconvinced that embrittlement is legitimate argument against chrome plating a spinner. If it were, we believe we would have seen more cracking and failures and we havent found a consistent pattern of either.

As for the legalities and considering the number of chrome spinners flying, it would appear that theres generally a look-the-other-way morality at work here.

Unfortunately, owners may occasionally encounter an inspector like Thomas Miller, who has a different view and is willing to express it in the form of condition reports grounding an airplane. Until someone drives a test case through the courts, any owner flying behind a chrome spinner risks an FAA spanking and an order to remove it.

Also With This Article
Click here to view the chrome checklist.