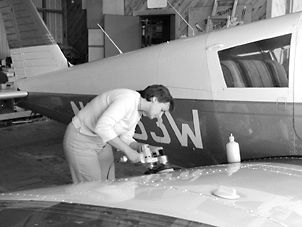 In the world of automobiles, detailing has been around for years, a service thats really a glorified wash/wax/vacuum job for nitpicky owners willing to pay a high price for a clean car.

Until recently, the equivalent service hasnt been available for aircraft owners in any organized way, but one company, Wing Waxers, Inc. does offer cleaning and detailing through what amounts to a national franchise program.Last year, three weeks before Oshkosh, I desperately needed to get my Skylane cleaned up but didnt have the time to do it myself, nor do any of my local FBOs offer cleaning service. Having seen the Wing Waxers Web site, I decided to give the company a try.

Better Idea
Like so many new businesses, Wing Waxers was developed by someone who couldnt find the services he needed on the open market. Wing Waxers founder Richard Todd, of Big Bear City, California, started the company after he found that his local FBO couldnt clean his Cherokee.

Out of frustration, Todd started his own company and within a year, he had cleaned more than 100 airplanes. As business increased, Todd sought the best cleaning products and procedures and, again, finding the market wanting, he developed his own products with the assistance of a chemist. These are sold to owners under the Wing Waxers brand name.

Todd also developed an intricate system for detailing aircraft with procedures for using these cleaning products. He now sells licenses to others who purchase the right to operate an aircraft detailing service in a geographic location under the Wing Waxers name.

Wing Waxers offers services in more than half of the states, geographically divided into sectors. Each of these sectors are individually owned and operated, which could result in some inconsistencies in the level of service. But Todd claims he has personally trained every Wing Waxers sector owner on a one-on-one basis.

Todd tells us that most of the sector owners are pilots and/or A&Ps, which he believes makes a more knowledgeable and competent aircraft detailer. Detailing is offered on everything from 152s to Citations. Wing Waxers offers three types of aircraft detailing services: basic detailing, aluminum polishing and paint touch-up and repair.

Basic detailing, which is also called a Teflon treatment, is offered in all the supported parts of the country. The Teflon treatment includes placing a layer of Teflon over the paint to form a protective coat. Teflon is a DuPont trademark for the thermal plastic resin, polytetrafluoroethylene.

Wing Waxers guarantees the Teflon treatment will last for one year, assuming normal usage and monthly washing. The Teflon coating may last even longer, as much as two years, if the airplane is hangared.

According to the specialized Wing Waxers system, the application of the Teflon treatment is preceded by preparation that includes de-bugging, degreasing, deoxidizing, sealing, windows, bright-work, rubber treatment and interior. Both de-bugging and degreasing are done with Wing Waxers Degreaser/De-Bug Cleaner.

Deoxidizing is then performed on all painted surfaces of the airplane with Wing Waxers De-Ox Cleaner. Wing Waxers claims that the de-ox step is needed to remove any remaining oil, burned exhaust, acid rain, bug-splats and pollution, as well as old wax build-up, so that the Teflon sealant will adhere to the paint. Although the De-Ox Cleaner has a 3300-grit value, Wing Waxers says that its safe and wont abrade through a painted surface.

Both of these levels of application are simply applied to the paint as a liquid, allowed to dry and then wiped off by hand or with an orbital polisher. Two levels are used primarily to save time because the top layer, which is exposed to the sun, must provide protection from UV rays and must be thicker, whereas the belly layer can be thinner, since it isnt exposed to UV.

After the Teflon treatment, Wing Waxers then performs the finishing details of the service. This includes windows, cleaning all plastic with Plexus, cleaning any polished aluminum areas, such as props or spinners, with Nuvite Aluminum Polish and treating rubber with Wing Waxers Rubber Lubricant and Protectant.

In addition to the basic aircraft detailing, selected sectors of Wing Waxers also offer aluminum polishing and paint touch-up and repair. If your sector doesnt offer these services, check with neighboring sectors; they might.

Paint touch-up and repair is a newer service offered by Wing Waxers and is only available in a few locations. However, eventually Wing Waxers plans to offer paint repairs for chips, peels, scratches, dings or dents and mild surface corrosion in most areas.

By Appointment
To contact Wing Waxers, I used the Website-www.wingwaxers.com. Theres a map of the U. S. and you can readily see which states offer services from Wing Waxers. I live in Virginia so I clicked on the state icon and was presented with contact information for the Wing Waxers owner/representative for my region, Bob Vandervliet.

I sent him an e-mail and he soon responded to schedule an appointment. I informed Vandervliet that my aircraft was hangared in Manassas, Virginia and surprisingly, Vandervliet told me that he was a CFI at Manassas Airport. He agreed to take a look at my airplane and to provide me with a quote.

Several days later, he told me that it would cost $350 to detail my Skylane, the standard rate for that model. The cost for the basic aircraft detailing with the Teflon treatment depends upon the airplane and each sector may set its own price. However, a review of the published prices for some of the sectors listed on the website is generally uniform.

I agreed to the price and Vandervliet promised to have the work done before I left for Oshkosh. Two days later, he delivered.

Vandervliet told me that he always prefers to do the cleaning in the hangar, including washing, thus no towing is required. Wing Waxers even provides its own water, although not much is needed since they use Wing Waxerss waterless cleaners.

Because my wife stores many items in the hangar in cardboard boxes, we were concerned about them during the cleaning, but Vandervliet assured us that he and his team wouldnt get anything wet. And they didnt.

I wasnt disappointed. The airplane was spotless. The exterior shined like a new penny. The top of the wings and fuselage were clean and polished and the belly was clean and oil-free, the windows were clean and clear.

I looked everywhere but could hardly find any residue from the Teflon sealant, save one or two spots of yellowed dry sealant near some of the rivets.

The interior had also been cleaned. The seats were spotless and the carpets had been vacuumed. The only squawks that I noted were that the instrument faces were evidently missed. I noticed my wifes fingerprint still on the Strike Finder, where she had pointed at a storm and asked me if I saw it.

Also, someone had forgotten to vacuum the luggage area, an oversight that was obvious because all the other carpets were so clean. Given the overall cleanliness of the airplane, especially the exterior, these were minor issues.

Maintenance
Wing Waxers advertises that Teflon is a thermal plastic resin thats inert to nearly all chemicals as well as acid rains, bug splats and high ultraviolet or pollutant areas. Because of this, Wing Waxers has no objection to washing or even waxing the airplane between the Teflon treatments. Indeed, monthly washing is anticipated.

Other than silicon-based products, which are strictly forbidden, Wing Waxers even allows the use of competitive products over the Teflon treatment, such as RejeX.

However, Wing Waxers recommends that the best way to maintain the longest life for the Teflon coating is to simply wash the airplane with clean water and a sponge and then towel it dry.

Conclusion
Immediately after the application of the Teflon treatment, my Skylane was smooth to the touch. Now, several months after the treatment, the airplane remains smooth and slippery.

Wing Waxers advertises that Teflon is recognized by the Guinness Book of World Records as being the slipperiest substance known to man. I can believe it. After 100 hours of flight time and several weeks of dreaded ramp parking while awaiting maintenance, the Teflon sealant is still visually and tactilely noticeable.

In fact, the Teflon treatment seems to have made the airplane easier to clean and water continues to bead. Best of all, the compliments keep coming.

Will I do it again? Yes, I think its worth the price. I have now logged a Teflon treatment into my airplane logbook as a recurring event. Oil changes every 25 hours, annual inspections every 12 months, and Teflon treatments by Wing Waxers every 12 to 24 months.

Also With This Article
Click here to view “Checklist.”

Lionel Lavenue of a patent attorney in the Washington, D.C. area. Hes a frequent Aviation Consumer contributor and owns a Cessna 182.