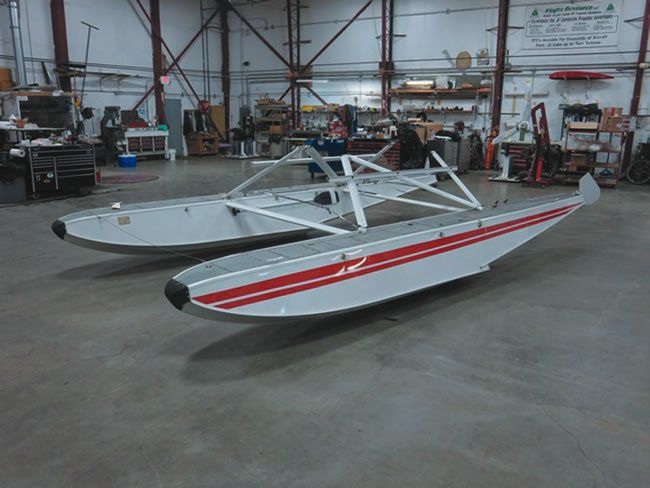 ral years and youve got it set up just the way you want-except you want it on floats. Can it be done for a reasonable cost or is it better to sell and buy a seaplane you like?

The answer is-it depends. Cessnas destined for floats came out of the factory with a floatplane kit installed. It included a number of structural beef ups as well as extensive corrosion proofing. If your airplane doesnt have the kit installed, youll have to have that installed before adding floats-and that can be difficult and expensive.

Derek DeRuiters Northwoods Aviation, does first-time float installations. He told us that putting a Cessna 180 or 185 on floats will cost a bare minimum of $10,000 just for installation of the floatplane kit-if all of the parts can be found. They are no longer available from Cessna. A Cub-series airplane is easier and less expensive and a Husky is pretty simple, as they come from the factory with many of the needed hard points in place.

DeRuiter told us that for Cessnas other than the 182-which is the easiest to put on floats and for which there is a good source of aftermarket parts-unless you have an incredible attachment to your airplane, it makes economic and time sense to sell your landplane and buy a seaplane set up as close to what you want as possible. For the two-place tandem airplanes, its an airplane-by-airplane call as float installation may not be that difficult.

What if you have an airplane with a float kit and want floats installed-how long and how much? First, have it done by a shop that regularly installs floats, you dont want to pay for someones learning curve. The airplane will be rolled into the hangar and hoisted by its lifting eyes (rings) atop the fuselage (theyre part of the float kit). The main gear and tailwheel will be removed. The landing gear attach brackets and float hardware will be inserted on the airframe and the fuselage pulleys and cable guides for the water rudder cables will be installed. On many airplanes, rudder return springs have to be added as the friction of the water rudder system degrades rudder centering.

If the airplane has cowl flaps, they will be adjusted to open further. The floats are then attached to the brackets and the water rudders adjusted.

On some airplanes a ventral fin on the fuselage or finlets on the horizontal stabilizer must be installed for yaw stability to counteract the aerodynamic effect of the floats. Plan on 15 hours of labor over two days and a cost of about $2000 for a first-time installation.

For amphibious floats the process is a little more complex-there are hydraulics and electrics to connect. Plan on 40 hours and $8500 for labor and parts for the first-time installation.

If you live where the seaplane season is limited by ice on the water, youll either have to store your airplane for the winter or swap the floats for wheels. Putting the gear back on will take about a day and run you $600, unless its a Husky, which is a little more complex and takes just under two days and costs about $900.

What does a set of floats cost? The good news is that there are a several reputable float manufacturers that have been around for a long time. The bad news is that floats arent cheap. For an airplane in the Cessna 180/182 size range, a new set of straight floats will set you back at least $38,000; used ones, in good shape, can be found for under $20,000. A new set of amphibs cost upward of $76,000; for used, plan on $50,000.