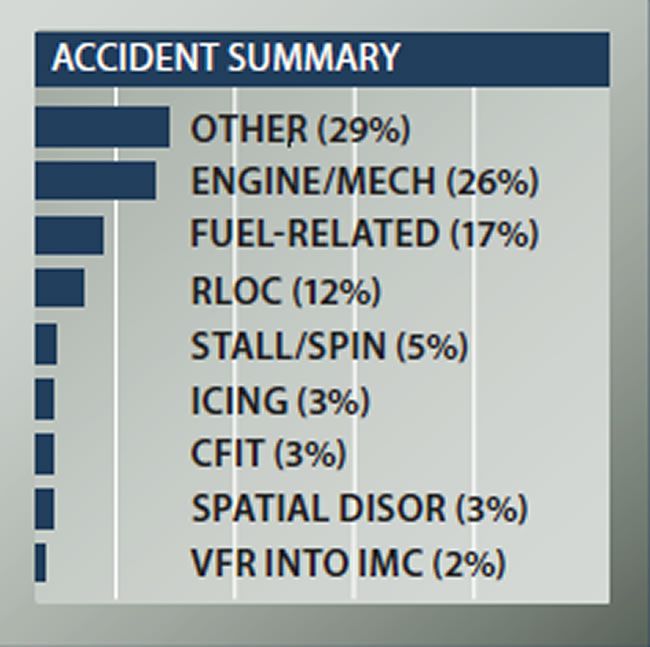 After reviewing the 100 most recent Model 35 accidents, we couldn’t help but wonder about the demographics of the owners. The majority of the events fell into the “other” category and generally reflected lousy judgment on the part of the pilot, especially when the 17 fuel-related accidents are added to the pot. On top of that, 10 of the fatally injured pilots had been taking FAA-proscribed medications that may have impaired their ability to fly an airplane.

Fifteen of the 17 fuel-related accidents involved running a tank dry and not getting a restart—most of the time the pilot didn’t even follow the restart checklist. The other two pilots tried to fly further than the available fuel aboard would allow.

There was no question about impairment of the pilot who not only was taking proscribed medications, but had several drinks prior to departure. On an IFR flight plan, he climbed steadily for several minutes before pitching the airplane over into a dive so steep that the airplane broke up prior to ground impact.

With the Bonanza 35-series history of in-flight breakups and the fixes applied to the airframe, we were pleased to find that, while there were three in-flight breakups, none were attributed to any issue with the airframe. In addition to the impaired pilot referenced above, there was a non-instrument-rated pilot who lost control in IMC and broke the airplane in a spiral dive and one who decided to descend, VFR, at well above Vne.
There were two airframe overload events—bent, not broken. One pilot was staring at his GPS as the airplane entered a diving spiral; he overloaded the structure during a hasty recovery. Another pilot experienced either buzz or flutter serious enough to damage the structure while flying above Va in turbulence.

Of the 26 engine power loss events, investigators couldn’t figure out why in 12 of them. In the remaining 14, almost all were due to either improper or lack of maintenance.

The wide-track landing gear of the Bonanza has a deserved reputation for helping make its ground handling among the best in general aviation. That was reflected in a low rate of runway loss of control (RLOC) accidents, 12 percent.

The bad judgment runner-up in our survey was the owner who landed in a hay field after the door popped open on takeoff. He closed the door, then tried to take off downwind from the hay field. He hit a hedgerow and tore the airplane up in a drainage ditch. The airplane hadn’t had an annual for years—but then he hadn’t had a medical or flight review for years, either. He told investigators that he just kept on flying.

A Bonanza pilot on an IFR clearance, in IMC, told the controller he “had an oil pressure problem.” The controller started to vector him for an instrument approach at a nearby airport. During vectors, the controller inquired about the oil pressure problem. The pilot responded, “Oil pressure zero, cylinders cold.” He did not declare an emergency or admit the engine had failed. Despite being high enough to have reached the airport when the engine quit, the pilot never disclosed the situation to the controller, who continued vectoring the airplane for an approach. The less-than-loquacious pilot died in the crash.