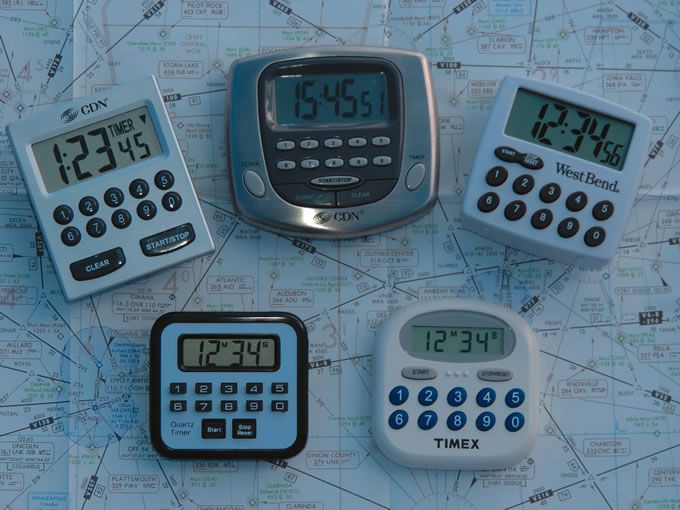 Given today’s avionics and RNAV approaches, do you really need a timer? Truth is, many of the devices in our panels and on our portable gadgets already have a timer built in. Using that timer, however, can be a challenge as the sequence of commands to access it in the Garmin G1000, for instance, might not be something you’re going to always remember or find sufficiently convenient. So, we think a dedicated, standalone timer is still useful. Sure, you could use the timer function in your smartphone, on the Pebble Smart watch or the one in Garmin’s D2 pilot watch, but we think timers are best placed within the instrument scan.

Still, would you actually use the thing? Yes. You’d still use it to time fuel tanks, power reductions on descent when concerned about shock cooling, maybe for timing a turbo cool-down after landing and, yes, on the occasional non-RNAV approach.

Frustrated by the ever cheapening of household electronic gadgets, we mounted a search to see if any simple household timers were still made with 10 direct-entry buttons. The good news is that they are. The bad news is that they’re a bit difficult to find.

Each offers direct entry with 0-9 buttons and can count up or count down by seconds. Some count only up to minutes, while some go to hours. All but the West Bend have a nice overrun feature on the count-down timer. With the overrun feature, when the timer reaches zero, it starts counting up. This way, if you’re timing a hold, for instance, and you want a two-minute leg, you’ll know that the leg actually took two minutes and nine seconds.

Surprisingly, we found we still liked the older Timex models, but some may be tough to source, except maybe on eBay. They have a good combination of size, ease of use, display and alarm tone and volume. Oh, and we won’t be reporting battery life for this roundup. If they’re anything like that old Timex, the battery life is measured in decades. That Timex is still working fine with a AAA battery dated to expire in March 2004. Of course, the TI239 using a button battery probably won’t last so long.

West Bend 40005
This is a basic timer. It operates quite simply and doesn’t have the overrun feature. Like most of the timers, from zero it counts up when you push start. Or, from zero you can enter a time and push start and it’ll count down. With a few variations, this is the standard way these timers operate.

It has a six-digit display. The display is large, with the hours and minutes about 5/8 inch tall, but the seconds are shorter at a little over 5/16 inch. This size difference caused us to overlook the seconds on one occasion—quickly glancing at zero minutes, we thought the timer had elapsed when there were seconds remaining.
When the timer reaches zero, the alarm beeps repeatedly, four beeps at a time, over and over.

The back has a bulge for the AAA battery and a spring loaded clip that you could use to clip it on your shirt. The clip has a magnet on it as well as a bale that falls to hold the clip open to act as a kick stand.

Our only real gripe is the alarm. That beep is more like a chirp. It’s quite high pitched. It is loud, though, and somewhat penetrating. But with aging ears and a loud cockpit, it might be difficult to hear. With the display remaining static when it reaches zero, you could miss the end of the timed event.

General Tools, CDN
The General Tools and Instruments TI239 is the smallest of the timers, although it hosts a good-sized display with four digits for minutes and seconds. Operation is standard for the basic functions.

The overrun feature on this timer operates in a unique way. When the count down timer reaches zero, it begins a continuous beeping and the display counts up. It doesn’t flash. When you now push the stop/reset button, the beeping stops and the display stops and shows the sum of the original time you set, plus the overrun.

Say you were timing that hold leg from two minutes, but you went 15 seconds over. The display is now set to 2:15, showing you the total time since you started timing. At this point, you’d expect to be able to count down from that 2:15, but you can’t. Pushing start does nothing. If you push stop/reset, the display reverts to the original time from which you can count down. Of course, if you push stop/reset again, it zeroes the timer.

The display on the CDN model TM30 might be the best of the batch, in our view. It’s about the same size as the West Bend, but it seems bolder and has somewhat higher contrast. The display has five digits, providing a single digit for hours. Another nice feature of this display is that when the timer expires and the alarm starts beeping, the display flashes. We like that for cockpit use—if you miss the beeping, the flashing display might get your attention. Finally, the display also has the word TIMER and an up and down arrow to show whether the timer is counting up or down.

The TM30 has a clip on the back similar to the other timer clips, with a magnet on it and a bale to hold it open as a kick stand. However, there’s also a little hinged loop at the top of the clip that you open for the option of hanging the timer on a hook.

Just about everything on the CDN model TM23-S is different than the others. It’s the only one to offer a clock, which can be set for 12-hour or 24-hour format. The six-digit display is of similar large size to the other CDN and the West Bend, but the clear cover over the display seems more highly reflective. We often struggled to clearly view the display. Like the TM30, the display flashes when the timer expires.

This timer is physically the largest, but still not overly so. It takes a AAA battery. The back is smooth, with a magnet and a fold-out loop that’s a kick stand or could possibly be hung on a hook. The alarm is similar to the other chirps, but it often seemed more muted and softer, possibly from the way we were holding it. Nonetheless, it’s quite likely that you could miss the beeping of an expired timer.

In addition to the clock, this timer is also the only one with simultaneous count-up and count-down timers—both can be running at the same time, much like the aviation-purposed timers. Unfortunately, this necessitates a rather more complex operating logic. If you want to view the clock, you push the clock button. If you want the count-down timer, you push the timer button. The count up-timer has a count-up button. These are in addition to start/stop and clear buttons. The display has annunciators for timer and count down that flash when these independent functions are operating, so you can see what it’s doing.

When you stop the timer during the overrun, it freezes the display with the overtime showing. Push start/stop again and it simply resets the timer to the original value, which you can again time with another push of the start/stop button.

We love the TM23-S for the features. We don’t love the highly reflective display and the excruciating small legends on the 0-9 buttons. If you’re past 45 years old, you’re unlikely to be able to read these in anything but the brightest light without wearing your cheater-glasses.

Also, the more complex operating logic, while not difficult, did induce operator errors. For these reasons, we’re not sure this timer should have a place in a cockpit.

Which One?
We liked some features on each of these, but we also found gripes about each as well. In the final analysis, though, we’d probably pick the CDN TM30 as the best set of compromises. Its display is clear and sharp, the alarm beeper is most likely to be practical in a cockpit and the vibrate option is a clear plus. About the only thing we truly didn’t like is the operation of the overrun failing to capture the overtime, which isn’t a deal breaker for us.

You might argue that you no longer need traditional timers like these, and we’d agree, but with caveats. Bottom line, though, is that there are still many events that should be timed, and these little household timers are useful, convenient and best of all, cheap.