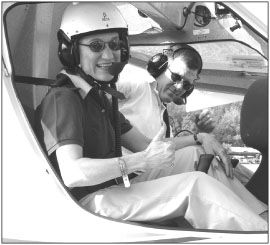 You are staring in disbelief at the bill from your airplanes last annual. When you divide the number of hours you flew last year into the maintenance, insurance, tie-down and miscellaneous other costs, the $100 hamburger looks like an hors doeuvre. In fact, with all the congestion, surprise temporary flight restrictions and the general hassle of getting from A to B, youre flying more to stay current than you are for transportation, right?

And dont forget that your medical is due next month and the last time you checked your blood pressure at one of those drugstore machines, the pharmacist remarked that he didnt know the scale went that high. Wasnt this supposed to be fun? Wasnt flying supposed to make your life easier? Rather than packing it in, what can you do to rediscover that essential joy?

Theres a massive effort afoot to provide you and tens of thousands of others with what is supposed to be a simpler and cheaper way to put a few thousand feet between you and the ground. But the FAAs proposed Light Sport Aircraft/Sport Pilot rulemaking process is being tossed around by bureaucratic turbulence and its future is anything but certain.

Should the proposed rule crash and burn-and theres a very real chance that this could happen-it wont just be those longing for the simple life who will be affected. Some say theres a whole industry just waiting to happen based on the proposed new pilot and aircraft certifications (see the sidebar) and that the market opportunities they will open will be instrumental in the recovery, and perhaps the survival, of many companies.

Who Knows?
The hardest part about this whole thing is the uncertainty, said Nicholas Heintz, of Zenith Aircraft. Weve already spent money getting this set up. Zenith is one of scores of kit makers poised to sell factory-completed aircraft once the new rule is enacted. They, and as many as a dozen others, are manfacturers all dressed up with no place to go.

What, exactly are they waiting for? A little history is in order. Its fair to say that the Experimental Aircraft Association has been the driving force behind the Sport Pilot/Light Sport initiative. The earliest discussions were probably held decades ago but the effort began in earnest about 10 years ago.

Its also fair to say that the rule is as much a reaction to EAAs success in championing the grass roots aviation movement that has spawned the commercial availability of aircraft that dont fit the existing regulatory environment. Quite simply, there are thousands of aircraft flying in the U.S. with barely a shred of oversight or control. EAA says Sport Pilot/Light Sport will legitimize those aircraft and pilots.

But it also stresses that the rule is an attempt to answer the needs of many pilots and would-be pilots who have dropped out of or shied away from flying because it was too costly or time consuming.

All the lobbying paid off in early 2002 when the FAA posted its Notice of Proposed Rulemaking for the new certification standards. EAA and the industry associations that were behind it apparently thought the battle was won and that everything to follow would be a formality. Once the comment period for the NPRM passed in May of 2002, the FAA had up to 16 months to digest the 2754 submissions and finesse the document.

Then it was supposed to be off to the Department of Transportation for a 90-day review and then to the Office of Management and Budget for 90 days. The plan was for FAA Administrator Marion Blakey to announce the completion of the process at EAA AirVenture last August. A lot of people left Oshkosh disappointed when Blakey announced only that the FAA was finished with its part and the DOT and OMB still had to have a crack at it. Still, a six-month delay in government is nothing unusual and the watered down announcement didnt set any alarm bells ringing.

It Wont Fly
But developments in the last couple of months have raised some eyebrows and there are signs of desperation in the most recent attempts to keep the process on the rails. Hard questions are being asked about the future of Sport Pilot/Light Sport and there arent very many answers.

In late December, about two months later than expected, the DOT completed its review of the rule and sent it to the OMB. The OMB had 90 days to give it the stamp of approval. At about 89 days and 23 hours, the FAA withdrew the rule, a highly unusual step that was whitewashed with soothing nonchalance.

The FAAs Sue Gardner told Aviation Consumers sister online publication www.Avweb.com that the move was normal and characterized the issues as minor. Id expect this to take probably a couple of weeks, she said. When about a month had gone by, we inquired again. This time, spokeswoman Allison Duquette said it would be another week to 10 days. Now, two months after the rule was withdrawn, Duquette told Aviation Consumer that the rule has gone back to DOT for more work and she doesnt know when it will go back to OMB. She also said that when it does go to OMB for the second time, the normal 90-day review period will not be invoked, meaning it can be held at the White House indefinitely.

Other than some vague references to the FAAs cost-benefit analysis of the rule, federal officials have refused to discuss the nature of the OMBs concerns. Duquette says thats because the discussions about pending rules are always kept secret. Its pretty hard to keep those kinds of secrets in Washington, but if anyone outside the FAA/DOT/OMB security blanket knows what the problems are, they arent saying. In fact, it appears representatives of the two largest GA groups in the country are as much in the dark as the rest of us, if the anemic results of some meetings held with OMB officials are any indication.

On April 28, two senior Aircraft Owners and Pilots Association staff members, Andy Cebula, the vice president for government relations and Luis Guitierrez, the director of regulations and certifications, met with OMB officials. It appeared to be a fishing expedition as much as a lobbying effort.

AOPA spokesman Jeff Myers said the AOPA staffers reiterated their support for the drivers-license-as-proof-of-medical-fitness provision of the proposed rule. Myers said the OMB officials heard them out and bid them good day without giving any clue as to the future of the rule. There were no statements, no agreements, no promises, said Myers.

Perhaps most telling is that there was no press release from AOPA. The organization never misses an opportunity to announce GA-friendly developments, even minor ones, but this time there just didnt seem to be much to tell.

EAA, however, took a different tack. Two weeks before its April 29 meeting with OMB officials, EAA started a petition of support for the proposed rule at Sun n Fun and also launched an online version. It gathered 10,000 signatures in those two weeks and Earl Lawrence, the VP of government relations, along with Eric Tucker of Kodiak Research (Rotax engine distributor) and Phillip Lockwood, of Lockwood Aviation presented the petition at their meeting with four OMB officials. What followed was a press release that exulted how impressed the OMB was with the petition but contained no reference as to why the rule is stalled and what is being done to unstick it.

However, there may be some clues in an August 8, 2001 letter from the OMB to the DOT in which OMB suggests major revisions to the original draft of the NPRM. In the letter, OMB Administrator John D. Graham tells DOT that the mandated principle of the OMB review is to ensure the benefits of the regulation justify its costs . Graham writes that the FAAs regulatory analysis is flawed and the rule might end up costing the country money. Also, the OMB suggests that better enforcement of existing regulations could conceivably yield higher net benefits to society. Three years later, it could be that the FAA, EAA and the kit industry are still trying to convince OMB that Sport Pilot/Light Sport will benefit society without burdening taxpayers.

In the meantime, theres no shortage of conjecture on the part of some of the people most affected by the stalled rule. Zeniths Heintz says he thinks the OMB is most worried about how manufacturing and ongoing maintenance standards will be enforced, since the FAA plays little direct role in their formulation and compliance. Those are the two things that keep coming up, he said. Under the new category, standards are being set through an industry consensus process, rather than by FAA decree.

Manufacturers will sign declarations of compliance with those standards. Murphy Aircraft spokesman Stephane Marois said there are more practical objections being raised. He said much of the discussion hes heard is about potential noise problems. A proliferation of powered parachutes, for instance, could ruin many a Sunday sleep-in on calm summer mornings.

Then theres the issue of safety. Proponents of the rule are bragging that it will take an average of 20 instructional hours to pass the Sport Pilot ride. Since its a VFR-only ticket with most of the nav and instrument work stripped out, the reasoning appears to be that a simple mathematical calculation will reduce the instructional time by the amount of time taken to learn all that complicated stuff.

But it cant be overlooked that hood work and cross country trips are also valuable stick time that add to the basic flight skills and confidence of new pilots. There also seems to be a nostalgic air about the new airplane and license classes that evoke images of grass strips and uncrowded skies.

But the majority of these airplanes and pilots will be sharing the pavement and the pattern with everyone else. And when you consider that many of the new aircraft covered by the rule are taildraggers, 20 hours doesnt seem like enough, in our estimation.

Still others suggest that the delay is purely political showmanship. Randy Schlitter, of RANS Aircraft maintains the government and EAA simply want to make the announcement in front of the biggest possible audience and that it will be made at this years AirVenture. And while they might choke on the ethical vacuum of such maneuvering, there are thousands who are hoping hes right.

Given what appears to be OMB intransigence and a notable lack of a high-profile champion for this idea, hope may be better defined as wishful thinking.

-Russ Niles owns a Cessna 140 and is a news writer for www.avweb.com. He lives in British Columbia.