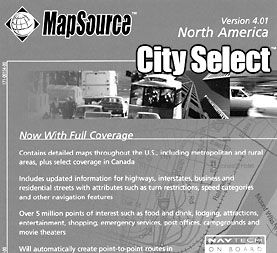 For most pilots, getting lost on the ground is a given. You battle ice, survive thunderstorms and sail down the glideslope with centered needles only to spend 40 minutes blundering around the tules because you took the wrong freeway exit on the way to your business appointment.

Since Hindi is the native tongue of the average gas station attendant, seeking directions is no longer just a renouncement of manhood, its not even an option.

Garmin tried to address this a couple of years ago when it tacked on a ground navigation package to its new color portable aviation GPS, the 295. We were underwhelmed. (See the June 2000 Aviation Consumer.) The add-on was cumbersome to use, even if it had useful and detailed street data. We gave it a passing grade but no gushing recommendations. In its new GPS 196 portable-which we reviewed in the September 2002 issue of Aviation Consumer-Garmin has tried again and this time theyve gotten it right. The ground nav package, in our view, is a swing-for-the-fences winner, with only a couple of warts.

CD-ROM Based
The 196s ground package sells for $299 and includes a beanbag mount for the dash, a USB chip burner and datacard and a map program called MapSource/CitySelect.

MapSource/CitySelect is one of a number of specialized mapping programs that will run on the 196 and other Garmin portables. (Theres also a marine package, which provides the same level of detail for boaters as the street version does for drivers.)

A pair of CD-ROMs contain both the street data and a loading/management program to run on a desktop computer. We installed CitySelect on a Windows XP machine and despite the usual nuisance warning about the software not having met Microsoft test protocols, it installed and ran without a glitch. Garmin says CitySelect needs a Pentium, at least, 32MB of RAM and between 350 MB to 1.5 GB of disc storage. You can load data directly into the 196 through a serial port cable or you can burn it into flash cards which pop into the bottom of the navigator. If you burn the cards-thats what we did-youll need a USB port and Windows 98/2000/ME or XP.

Garmin provided us with a couple of 64MB datacards, a vast improvement over the 16MB card used for 295. Still, you have to be canny about what maps you load or youll need a lot of datacards. (A 128MB card sells for $139.)

We used the 196 on a 500-mile driving trip down the east coast from Connecticut to the Outer Banks of North Carolina. That portion of the trip from southwestern Connecticut to northern New Jersey required an entire datacard and we were careful to select only the narrow corridor we were driving in. On the other hand, the entire state of Florida (less the panhandle) will fit on a single 64MB datacard. In the sparsely settled western states, youd need even fewer megabytes for large areas of coverage.

Handling the desktop program is easy for basic tasks, such as loading map data on the card. For the USB data transfer, you select the map areas you want with the cursor as the program adds up the total storage space required for what youve picked. When you approach 64MB, stop selecting map areas and click save to device and the maps are loaded into the card in a few seconds.

Turn You Idiot
With the datacard in place, you can ask the 196 to find a specific address in a named town-say 236 Falls Street-and the navigator will go hunting. Itll ask if you want the shortest route or the fastest time and you can specify parameters such as no toll roads and no U-turns.

The navigator will then construct a turn-by-turn route, complete with mileage, turn points, a detailed map and even ETE/ETA data. (The 196s displayable data is highly customizable; there are more choices than you could possibly ever want.)

We would call the 196s route calculating ability impressive, if not flawless. It led us through a labyrinth of city streets in Norfolk, Virginia when we specified shortest route over fastest time. At each turn point, the 196 beeps, announces the distance and scales down the map display so you can see the approaching cross street and know that its say, 250 feet ahead.

It takes some getting used to synchronizing the beeping with where the turn should actually be made. The navigator gives an early warning if you need to change lanes and you have to remember the turn point is still .3 mile down the pike.

Conclusion
If a combination aviation and ground navigator (plus marine) is on your needs list, the 196 and MapSource/CitySelect will fill the bill for not much money.

The software has far more capabilities than weve described in this short report, including route planning and editing and the database includes useful information on location of emergency services, restaurants and points of interest, along with phone numbers.

And if you prefer, you can load the program into a laptop and connect the GPS to it. Youll then have all the maps and features you could possibly need right there in the car.