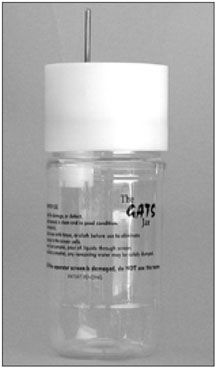 Our recommendation of the GATS Jar fuel tester in the March issue drew a couple of reader brickbats. There are some problems that you didnt mention, writes Allen Inks, of Toledo, Ohio, whose flying club uses the GATS for its aircraft. The gasket is, in my view, a poor design. Its difficult to reseat properly when screwing on the jar…I have seen several torn gaskets. The lack of an inner lip on the gasket seating surface aggravates this, causing gas to leak around the lid when its poured back into the tank.

Also, I find the reversible actuating tube on the GATS jar to be a little too wobbly for my taste when operating pin or bayonet-style drains. And since the pin is at the side of the tube, fluid being sumped may also flow outside the tube, spreading contaminants on the outside of the screen, Inks added.

In addition to the offset tube, reader Bill Shepard found another problem with the GATS. I have been using a GATS Jar for about two years now. In concept, it is great…but the bottle is made of a plastic with a low plastic temperature. My bottle is so out of shape (again) that the cap will not seal.

Shepard told us he keeps the GATS in a zippered bag in the baggage area of his Cessna 182 in Oregon, where its exposed to some degree of solar heating. To recover the bottle some time ago, he added, I used boiling water to heat it. I was able to form it into any shape and even fixed the seal problem. Because of this low-quality plastic, I cannot recommend that this product be purchased.

We exposed our test GATS jar to hot, direct Florida sunlight on a car dashboard for a week and noted slight distortion. We concur that the lid can be tricky to seat.

We contacted Aviation Specialities, the company that makes the GATS, and were told that it has occasionally heard complaints about distortion of the plastic. However, this evidently hasnt occurred frequently enough to merit a fix. ASs Wesley Stagg told us the plastic transition temperature is at least 230 degrees and the material shouldnt soften or distort below that. He says additives in some fuels may be partly to blame but no fix is in the works.The lid design, however, has been improved.