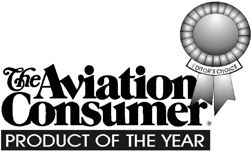 What makes one product better than another? Sometimes it just works better, sometimes the company standing behind it provides better customer service and sometimes a top product simply does more for less-which is how we define that elusive quality called the best value.

As professional shoppers and product testers, our job is to sweep the market in search of the general aviation products and services that you, as an aircraft owner, need to keep your airplane flying safely and economically. Once a year, in our Gear of the Year awards, we review the best products and services weve seen recently and on these three pages, were presenting our findings for 2005.

Our reviews are famously warts-and-all trials of virtually every type of product sold for light aircraft-including the aircraft themselves. While were on the subject of warts, we have a few of our own. Were picky. Were demanding. We are unreasonably, annoyingly stingy in handing out praise and we are all but immune to the breathless, laudatory prose found elsewhere in aviation journalism. When you dont accept commercial advertising, you can afford to be that way.

What that means is that you, the reader, paid for the words on these pages, not the companies that made the products. Therefore, these recommendations are unswayed by dinner and drinks with the marketing department or a panel full of free avionics. We therefore submit that our product choices represent solid, take-it-to-the-bank advice that you can really use.

Company of the Year:
Mooney Aircraft Company
Three years ago, any sane person would have concluded that Mooney was done as an airplane maker. With Cirrus, Lancair and Diamond dominating the market, the shops at Kerrville, Texas should have been chained shut with weeds pushing up through the crack in the taxiways.

But that didnt happen. Despite yet another bankruptcy and a crushingly competitive market, Mooney picked itself up, dusted off the financials and re-emerged as a genuine player in light aircraft general aviation.

It found the capital to quickly reestablish the workforce, reinvigorate the marketing effort and to bring its flagship product, the Ovation, into the 21st century with a Garmin glass panel. The result is that Mooney makes airplanes competitive with anything flying today. The turnaround has been nothing short of astonishing.

Weve noticed that Mooney has an aggressive sales team in place, its Web site has been re-engineered and, most important, its answering the phone and following up on sales leads and responding to press queries. Given the current market, Mooney may have some challenges ahead-as do all the manufacturers-but in our view, its presently meeting those challenges head on in a way we admire. For that reason, we have picked the Mooney Airplane Company as our 2005 company of the year and we wish them every success. (www.mooney.com.)

Best Sunshields:
Cunningham Covers
As we reported in our May 2005 issue, were baffled by owners who park their expensive airplanes on a sun-baked ramp with neither a cover nor sunshields. We cringe at the damage this does to upholstery and avionics.

Our market scan of sunshields revealed that Cunningham Aircraft Covers makes the top products. Theyre well made, they fit well and are moderately priced. Moreover, we have always found Cunningham to be a terrific company to deal with, delivering friendly, on-time service and products. (www.cunninghamcovers.com)

Best Lightweight Headset:
Quiet Auricomm
In our three decades of aviation product reporting, weve noted that its often the smallest companies that deliver the best products. Thats definitely true of Quiet Technologies, a small start-up that pioneered high-quality, well-engineered in-the-ear headsets that are an alternative to the bulky, noggin-squeezing designs most of us are used to.

Quiets AuriComm line has set the benchmark standard for how well these featherweight products can perform and as we reported in the July 2005 issue, the company is about to release an improved design. Quiet is not new to this space, either. The AuriComm headset took top honors in our 2003 products survey as well. (www.quiettechnologies.com)

Best Datalink:
WXWORX/XM Radio
Another second-time winner in the best product sweepstakes is WxWorx, whose XM Radio-based weather datalink continues to lead what is rapidly becoming a thinned out field. XM has proven to be a reliable, robust link system and the WxWorx partnership with the broadcaster has, in our estimation, proved brilliant. If there have been any technical snags between the two companies, they have proved largely transparent to customers.

The most impressive aspect of WxWorxs success has been its development of the portable market. For a scant $1000, its possible for owners of modest aircraft-right down to ultralights-to have practical and sophisticated onboard NEXRAD weather capability. In our view, this is an enormous advance in flight safety and an impressive example of how high-technology can be made affordable to virtually the entire market. (www.wxworx.com.)

Best Battery:
Duracell
We know you can hardly open a car door without bumping into the Energizer Bunny, but in our tests, the Coppertop trumped the hare. On an amps-per-dollar basis, Duracell alkalines proved to be the top value in throw-away AA batteries. If youre like most pilots, you buy a lot of these things to power headsets, GPS units, cameras and other cockpit gadgets.

While its true that the Duracells tend to be the most expensive batteries, our tests revealed that they offer the best value in cost, power and endurance among this class of batteries so theyre worth the extra cost. Rayovacs Maximum Plus were actually a bit cheaper but their endurance didnt match the Duracells, thus the latter remains our top choice. (www.duracell.com)

Best Cellphone Weather:
WxServer
Sometimes, were too geeky, sometimes were not geeky enough. In the case of cellphone-based weather delivery, the latter turned to be true. In our November 2004 report on cellphone-based weather services, we opined that such services were awkward to use and esoteric beyond reason. Not so fast, replied many readers, who use these services regularly.

Fair enough, then. In that case, the best and most practical of the bunch is WxServer, an obviously long-term provider that has continually improved its services since its inception. We like the fact that its Web-based so you dont have to access it only by cellphone. Further, the companys Web site also provides a list of cellphones that work with the service. With other providers, youre on your own to figure out what works and what doesnt. For $6.95 a month, WxServer is a good value for basic weather information. (www.avwx.net)

Best Oil Filter:
Champion
For the longest time, the oil filter market was dominated by one maker: Champion. But recently, Champion has seen significant competition. Still, in our view, Champion makes the best filter. The companys new Dash-1 filter is an improvement over previous models with a case thats 50 percent stronger and an increase in filter material. Despite these improvements, the dash-1 is 1/2 inch shorter, so its easier to fit into that tight space between the accessory case and the engine mount or the firewall. (www.championaerospace.com)

Best Aviation PDA:
Garmin iQUE 3600a
PDAs for the cockpit are another HGQ item. (Thats high geek quotient, in case youre wondering.) There are a ton of choices in this field but also one big problem: All them are compromised mechanically and electrically because they were never designed for cockpit use. Garmin addressed this by inventing the worlds first aviation-specific PDA, the iQUE 3600A.

The iQUE has a dedicated aviation-specific cradle that transfers critical functions such as the direct-to button and the cursor rocker-to larger keys that you can actually manipulate in turbulence. Very clever.

What the iQUE is missing is the ability to accept datalink from WxWorxs portable receivers but we have it from a reliable source that this shortcoming will be addressed with a new product to appear at Oshkosh. Still, the iQUE is easy to use and has a terrific ground navigation function. (www.garmin.com)

Most Promising Additive:
ASL CamGuard
Oil additives for aircraft engines have always been a sticky subject. Theres the question of whether theyre needed and if they actually do anything. Second, marketers of these products have played fast and loose with the term FAA approved as though it matters. In our view, it doesnt. The only legitimate way to judge additives is on performance or, failing that, credible lab tests.

One new product that has caught our eye does have impressive lab tests. As we reported in the February issue, ASL CamGuard, a new high-tech additive, shows definite promise in reducing the risk of corrosion and lowering metal-to-metal wear. Were not quite ready to step out there and fully endorse it just yet-we want to see more field experience-but from what weve seen so far, were impressed. (www.aslcamguard.com)

Best Fuel Tester:
Jeppesen Deluxe Tester
Cmon, who really thinks about the lowly fuel tester? We do, thanks very much. A half dozen crashes a year are due to water in the fuel and often, those pilots hadnt bothered to check their tanks. Jeppesens Deluxe Tester is well made of heavy plastic and has a robust brass center pin. In the way of all well-made tools, its just nice to use and if that encourages more careful sumping of the tanks, so much the better. (www.jeppesen.com)

Best Portable GPS:
Garmin 296
No surprise here. Garmins GPSMAP296 is the most capable small portable GPS navigator weve seen. It has a vibrant, crisp color display visible in the harshest lighting conditions, easy-to-learn operating logic and two profoundly useful safety features: a built-in terrain warning mapping and warning system and an impressive flight instrument page thats responsive enough to bail you out of a jam in the event of a vacuum pump failure. (www.garmin.com)

Best Seat Improver:
Moller Back Support
Our first reaction to this gadget-a contoured seat pad that fits onto a standard aircraft seat was: yeah, right. This thing is really gonna improve the hogged out pile of springs that passes for a typical aircraft seat? Surprise, it really does. As the nuns used to do in school, it forces you sit more upright and provides support along the entire length of the back. We found our flights were less tiring and, in hot weather, no soggy shirt. (www.mollersupport.com)