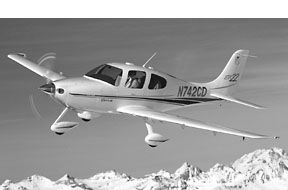 Aviation Consumers mission has always been-and it remains-to advise readers of not just the best products and services in aviation, but the best values.

The two are sometimes one in the same, sometimes not.

Occasionally, even a lesser product may be the best choice because it does what a slightly better product does but for much less money. And that, in the end, is how we define value; the most for the least.

In any group of products, we usually find a best of class and were not shy about making recommendations based on facts revealed during our testing. The fact that we accept no commercial advertising makes these judgment calls easier to make for we arent shy about stepping on toes now and again.

Herewith, then, is our annual roundup of the best products and services we have seen during the past year.

Product of the Year: Cirrus SR22
Despite the daunting odds against success in the world of general aviation aircraft sales, Cirrus Design has impressed both the industry-and us-with its products and its determination to succeed.

In 2000, we picked the SR20 as our product of the year, based on its sales, performance and service history.

With the SR22, Cirrus has added more power and increased the range and payload, thus creating what we consider to be one of the most attractive and nicest flying aircraft in GA history. At around $325,000 equipped, its hardly cheap but is, nonetheless, a good value in our view.

Acknowledging that Cirrus aircraft have had a rocky start with several high-profile accidents, nothing weve seen suggests that these accidents reveal fundamental flaws in the airplanes themselves. We await longer term service history to make a judgment in this regard.

In the meantime, Cirrus continues to do things right and in an industry where that seems a relative rarity, we applaud them.

Best Portable Oxygen: Nelson/Precise Flight
Not so long ago, portable oxygen systems were a rarity, never mind having the choice of several systems. Nelson was a pioneer in this market and, were pleased to say, has retained its edge in both quality and value.

Nelson sold its oxygen systems to Precise Flight in 1997 but the units are still sold under the original brand name. We like the Nelson systems for their well-designed carrying cases and packs and for their simple-to-use flowmeters.

While its true these systems sell for a slight price premium, we think the quality justifies the higher price in this case.

Best Value in HSI: Century 360
Horizontal situation indicators are a much-desired addition to any panel but many owners consider them to be unaffordable. Yet at under $10,000 installed-well under if you can find a good used one-the Century NSD360 is the best value in entry-level HSIs.

True, it uses a dated vacuum/electric design-we would prefer all-electric-but this instrument has proven reliable when handled and installed correctly. For upper crust aircraft, we like the Sandel SN3308. But its simply not appropriate for modest aircraft that dont have the external sensors that make the Sandel such a good choice.

Two shops that have consistently rated high in our reader surveys are Dial Eastern States in Cadiz, Ohio and Reese Aircraft in Robbinsville, New Jersey.

Weve seen the work these two shops turn out and we agree that its a cut above average. Both shops deliver good work and on time, according to readers, something thats to be highly valued in any maintenance work but especially in a paint job, something youll be stuck with for many years.

Top Value in Sferics: Insight Strike Finder
Our head-to-head comparison revealed that both Goodrichs Stormscope and Insights Strike Finder are first-rate instruments and both will keep you clear of the lightning discharges that signify a dangerous storm.

But if price alone drives the decision, the Strike Finders $5800 installed price represents the best value in sophisticated lightning detection. It has an excellent display and does far more than Goodrichs entry-level WX-900, in our estimation.

Best in Used Navcomms: Bendix/King KX155
Before Garmin came along to knock it off the throne, Bendix/Kings KX155 was the standard in digital navcomms and its still found in thousands of airplanes.

But as newer gear comes along to displace the 155, its finding its way onto the used market at attractive prices. At $2500 including glideslope, we think it remains a terrific choice as a second fiddle in a panel being upgraded with a single GPS mapcomm or other gear. The good news is that support for these navcomms continues to be good and there are plenty of them coming onto the used market.

Best Aircraft Covers: Kennon and Cunningham
Were perpetually perplexed about one aspect of aircraft ownership: Why dont more owners-in fact, all owners-who store their airplanes outside have cabin covers?

They help keep the cabin dry and they protect the windshield and upholstery from the effects of blowing dust and sunlight.

There are plenty of products to choose from but when we examined the market choices in our February 2002 issue, we picked Kennon and Cunningham as the two best cover designs. Both companies provide both excellent value and good customer service.

Best Bargain Traffic Watch: Monroy ATD-200
One thing the avionics industry hasnt yet figured out is how to build affordable traffic avoidance equipment. Capable systems are in the $20,000 range and we dont see these as a good deal.

At the low-end of the scale is Monroys ATD-200, a low-cost transponder detector. Admittedly, its not TCAS. It is occasionally subject to false alarms and ranging isnt as accurate as airline equipment. But for $695, it provides at least some warning of nearby traffic.

PDA-Based Navigator: Control Vision Anywhere Map
Palmtop computers have had a tough time of it in the cockpit, with short-lived applications of dubious value. But with the advent of affordable color PDAs, theyre beginning to make inroads.

If the idea of PDA navigation appeals, we think the best PDA-based moving map software is Control Visions Anywhere Map. Our tests revealed that its feature rich, easy to use and stable on Compaqs popular iPAQ.

Control Vision continues to develop new features and accessories to enhance PDA performance and this, more than anything else, impressed us. If you already have a PDA, Control Vision will sell just the stuff you need to turn it into a credible color moving map navigator.

Aircraft Security Device: Throttle/Prop Locks
With worries about terrorism still rampant, airports of all sizes may soon require owners to secure their aircraft against unauthorized flight by methods other than ratty tiedown ropes. The cheapest way to do this may be via aftermarket security devices.

One product we found that does this effectively with little or no chance of damaging the aircraft is a throttle or prop lock. These fit around push-pull type controls and prevent them from being operated.

If you have a throttle quadrant, however, they wont work. In that case, we recommend a heavy chain on the prop. These are sold by Sportys and at local motorcycle shops. (Make sure the chain is vinyl or rubber-coated so it wont nick the prop.)

Best VHF Handheld: Icom IC-A23
Icom has made a name for itself in the amateur radio field for good reason: a history of innovation and quality. It has duplicated this reputation aviation, by introducing a line of sophisticated handheld navcomms. The latest of these is the IC-A23, which is small and packed with features, albeit pricey at $449 on the street. Then again, if you carry a VHF handheld for emergency back-up comm, we doubt if youll be quibbling about an extra $100, which is the premium price the Icom demands over the closest equivalent competition.

Best Panel Clocks: Davtron and EI
As we reported in the July issue, the FAA thinks you need a panel clock to be legal for IFR. There are plenty to choose from but our research indicates that Davtron and Electronics International offer the best values.

Rather than just replacing an old clock pro forma, we think it makes more sense to look at the clock replacement as an opportunity to add capability to the panel rather than just crossing a legal T.

Both Davtron and EI sell clocks that include other functions, such as OAT, altitude minders and volt/amp meters.