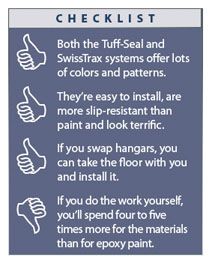 Being keen observers of the airport social scene, we have noted three classes of hangar dwellers: those who use a hangar as a garage to park the airplane, those who decorate the thing like a vacation home at the beach and those who consider a hangar a repository of household junk and dont even have an airplane. For that middle class of hangar owners, a proper floor covering is a must.

While raw concrete is serviceable, its easily stained and looks tacky after a few years of service. Two-part epoxy coatings are considered to be top of the line but theyre expensive and messy to apply. Lately, weve noticed a new option: plastic or vinyl interlocking tiles of the sort used in industrial plants and, more recently, in the tonier booths at tradeshows.

In fact, we first noticed these products at Oshkosh a year ago and this year, a second vendor emerged pitching a similar product to the aviation market. While epoxy is pricey, these tile systems are even more expensive, but they have the advantage of being easier to install and more tolerant of error, theyre available in colors and patterns and, best of all, if you move to a bigger or different hangar, you can take them with you.

Both of these products, one called Tuff-Seal and the other SwissTrax, originated outside the U.S. as solutions to difficult flooring problems, primarily in the industrial and outdoor arena. Tuff-Seal was developed in South Africa about nine years ago, but is now manufactured in the U.S. and distributed by Flooring Adventure, LLC in Richmond, Virginia.

As the name implies, SwissTrax was developed in Switzerland as an outdoor garden patio treatment. Its also made in the U.S. and marketed by a California-based company of the same name.

Both products are broadly similar, being plastic interlocking tiles meant for fast, easy installation that isnt-but can be-permanent. Tuff-Seal tiles are 18 inches square and made of dense vinyl available in nine colors and four surface patterns. Each tile measures 18 3/8 inches square, is 1/4-inch thick and weighs 3 1/2 pounds. (That means for a 1000-square-foot T-hangar, plan to heft more than a ton of boxes containing all the tiles youll need.)

As shown in the photos, Tuff-Seal tiles are joined through a series of dovetail pins and sockets. On two adjacent edges, each tile has pins while the opposite two adjacent edges have the sockets. You simply lay the tiles down, line up the joints and tap them home with a rubber mallet. We were impressed with the precision of the joints. When properly seated, theres almost no discernible gap between the two tiles. This makes them all but totally impervious to liquid spills seeping between the tiles.

Flooring Adventures Kelly Mortensen told us Tuff-Seal tiles are impervious to avgas, Jet-A and oil, although the blue dye in 100LL will stain the white tiles. Further, Skydrol hydraulic fluid will soften the surface if allowed to stand. The solution to that is to clean spills immediately or simply replace the tile, which can be done in minutes. SwissTrax tiles are made of injected polypropylene and are available in two sizes, 13 inches square and 15 3/4 inches square. At a pound and 1 1/2 pounds respectively, theyre noticeably lighter than the Tuff-Seal products are. Theyre also thicker, at 1/2 inch and 3/4-inch thick for the larger SwissTrax tiles.

Theyre available in 14 colors and three styles, plus three grades for consumer, industrial and tradeshow applications. SwissTrax sent us two samples, one called DiamondTrax and the other RibTrax.

DiamondTrax reminds us of the diamond plate steel or aluminum material often used for cover plates or flooring grates in industrial and marine environments. RibTrax is a perforated grate-type material which allows air-not to mention liquid and dirt-to circulate freely up from the floor and down from the surface of the tiles.

Like Tuff-Seal, SwissTrax products have male and female joints along opposite adjoining edges. But rather than dovetails, they have a series of hook-and-eye fasteners-five per edge on the small tiles, six on the larger. These snap together like Lego blocks and draw the joints tight when theyre tapped home. However, in our view, the seated joints werent quite as tight as the Tuff-Seal joints were. That might be a minor dirt or liquid collector.

At Oshkosh, SwissTraxs Randy Nelson had a sample floor in place using the RibTrax tiles. He contended that this would be a good choice for a hangar and that dirt or liquids which dropped between the open perforations could removed with a shop vacuum or the tile simply lifted to gain access to the mess below.

Using the sample SwissTrax sent us, we sprinkled a little dirt on the tiles and tested the claim. It works. Nonetheless, we wouldnt want the RibTrax on our hangar floor. In our view, chasing dirt with a shop vac is not our idea of a fun way to spend a Saturday morning and, inevitably, a small dropped screw or rivet will find its way through the grating.

One point of hangar flooring is to make dropped items easy to see and retrieve, thus we would stick with the solid DiamondTrax design over the RibTrax. Because both the Tuff-Seal and SwissTrax products have surface texture of some kind, they are more slip-resistant when wet than a painted hangar floor might be. Tuff-Seals Mortensen told that for this reason, some companies that dont have the budget to tile an entire large hangar treat boarding areas that are subject to rain wetting or snow and ice.

COST, INSTALLATION
As hangar flooring materials go, these two products are among the most expensive if not the most expensive choice. However, in the commercial arena, Mortenesen points out that when installation labor is considered, they are a mid-priced option. Thats because serious industrial coatings like the two-part epoxy we used on our hangar two years ago-see the sidebar-are labor and time intensive. They require hours of preparation and cleanup. The Tuff-Seal system is priced at about $4.50 per square foot, allowing for discounts.

Its available in two grades: Prime is new vinyl and for a buck less a foot, you can buy tiles made of recycled vinyl, but only in one color (black) and two patterns. If a typical T-hangar is 1000 square feet, plan on between $3500 and $4500 for the tiles alone, plus some additional costs for edge molding and cement for additional waterproofing of the seams, if desired.

At $5000 all in, that makes Tuff-Seal a little more than twice as expensive as a commercially painted T-hangar floor, but about four or five times more if you do the work yourself. The SwissTrax system is less expensive, at about $3 to $3.50 per square foot.

One advantage of the tile systems over painting a hangar floor is that theyre an easier DIY project. Epoxy paints require etching and lots of water for rinsing the floor, which isnt always available in airport T-hangar rows. SwissTrax estimates an hour of installation labor for every 100 square feet of its tile product, meaning a long day of work to do a T-hangar. Allowing for two coats, an epoxy job requires two to three days of several hours each. No special tools are required to install either Tuff-Seal or SwissTrax. If the floor will be exposed to tractive loads-a powerful tug pulling a heavy airplane-the tiles can be selectively fastened to the floor.

CONCLUSION
We like both of these products and wouldnt hesitate to recommend either one. If cost is no object, we prefer the Tuff-Seal system for its precision joints and thinner overall thickness. For $1.50 less a foot, the budget choice is the SwissTrax DiamondTrax. Its an excellent value, but we like the looks of the Tuff-Seal a little better.

But is it worth it to spend this kind of money on a hangar floor? Yes, if you truly value a nice looking, clean hangar and you spend enough time there-and many owners do-to enjoy the benefits of a high-end floor covering. The tile systems are much less labor intensive than a floor coating and, if you move later or the airport doesnt allow floor painting,  you can take it with you or change the color and pattern to suit your new airplane paint scheme. There are worse things to do with your disposable income.