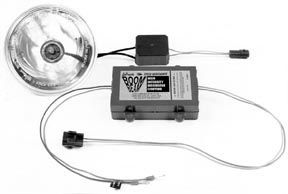 Were not much on long shots, especially when it comes to anything to do with airplanes. So it was with some trepidation last spring when we removed the Boom Beam landing light from our crashed Mooney, almost as an afterthought.

Recall that our previous corporate hack, a 1980 Mooney 201, ended its days ignominiously in a South Carolina salt water marsh after the engine quit on takeoff. Fortunately, no one was hurt but the airplane was a total loss, thanks to salt water incursion.

The insurance company, USAIG, processed the claim quickly and efficiently and it accepted our offer to buy back the avionics, which we have since installed in our new Mooney, a 1982 231.

When we recovered the boxes from the airplane, we picked through a few personal items and noticed that the Boom Beam landing light which we had installed in March of 2000 was virtually encapsulated in mud; the landing light lens was broken by the impact.

The lamp is driven by a high-voltage ballast mounted on the firewall and it too was liberally slimed in salty mud.

Surely, we thought, this thing is toast. But in the interests of continuing research and development, we pried the lamp loose and removed the ballast, later shipping it off to LoPresti Speed Merchants for examination and testing.

Hey, It Works!
David LoPresti called a couple of weeks later to say that when the shop cleaned off the mud and debris, the Boom Beam fired right up. Speed Merchants tested the bulb continuously for 70 hours and, satisfied that its airworthy, shipped it back to us for installation.

We paid $36 for inspection and tagging and another $120 for a lens to fit into the 231s cowling and a jumper extension for wiring. The ballast, starter and lamp from the original unit remained serviceable.

Given that the 201s nose plowed a 50-foot furrow in the mud, with the landing light leading the charge, we have to say were impressed. When we originally installed this improved landing light, we were skeptical of its $1000 cost and wondered how durable it would be. (Current prices are given as from $948.)

But over two years and about 500 hours of use, the Boom Beam performed as advertised. During that same time frame, we would have expected to buy about a half dozen landing lights and while theyre cheap enough, installing one is a pain in the butt. The Boom Beam performed admirably throughout this test period, never missing a beat. We did have a problem with the wires burning through due to exhaust heat; a judiciously placed heat shield fixed that.

As we reported in the April 2000 issue of Aviation Consumer, the Boom Beam uses a high intensity discharge system thats identical to the technology used in the mega-bright lamps found on serious off-road vehicles. The lamp consists of a gas-filled tube but no filaments. A pair of electrodes apply high voltage to metal salts between the electrodes, striking an arc similar to old carbon arc searchlights.

The lamp is both very bright and claimed to be long lasting and resistant to vibration. So far, we cant complain. In our view, the Boom Beam has proven at least as bright as the 201s stock landing light. Well let you know how it fares in the 231. The testing goes on. Contact LoPresti Speed Merchants at 2620 Airport North Dr., Vero Beach, FL 32960, 800-859-4757, www.SpeedMods.com.