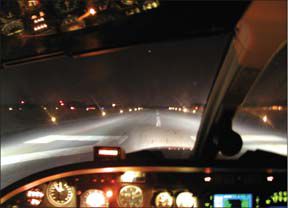 Aircraft landing lights are, at best, the maintenance equivalent of an open sore. They dont work well to begin with and often burn out when you need them most. Thankfully, the fix has become more affordable: The high intensity discharge lights that have been popular in the off-road industry for a decade are finding their way into light aircraft, having been pioneered by LoPresti Speed Merchants some six years ago. Recently, at least four other companies have entered the HID business. Were happy to report theres now price competition in the field and we expect to see more.

We also visited a fifth company, Royal Atlantic Aviation, that has been marketing HID lighting, specializing in twins and turboprops.

Bright, Durable
HID lamps have been popular mods for off-road vehicles and motorcycles and some kits are available for street-legal applications. As shown in the graphic at right, HID lamps emit an intense, relatively cool light not by heating a conventional filament but by exposing Xenon gas sealed in a fused quartz arc tube pressurized to a couple of atmospheres. The tube also contains minute amounts of mercury and solid sodium-based compounds.

HID tubes fire in two stages, the first when a 25,000-volt pulse is introduced to strike the arc. This vaporizes the mercury and gives the HID its characteristic blue initial color. Within about five seconds, the sodium compounds vaporize and the light turns to an intense white similar to sunlight. Voltage-85 volts for sustaining the arc-is provided by a dedicated ballast with the high-voltage spike generated by a device called an igniter.HID lamp assemblies come in two types, the D2, which requires a remote starter circuit and the D1, in which the starter is self-contained in the base of the bulb assembly, as shown at right. D1 assemblies are the latest technology and all of the aviation systems we examined use this bulb.

HID lamps are more efficient than traditional filament-type bulbs, producing five times the light on about one-third the current. Further, because they have no mechanical filament to succumb to heat or vibration, HID lamps last longer than filament bulbs, easily reaching several thousand hours of continuous use.

Light aircraft HID systems have used 35-watt bulbs but recently, 50-watt units have become available. These use the same HID tube but have a higher output ballast. In exchange for the brighter light, the arc tubes service life is diminished by about a third, a difference that may not be meaningful.

While those wattages sound low compared to conventional bulbs, the whiter light from HID systems appears much brighter and produces better contrast on dark runways and taxiways and its thus a huge improvement over conventional tungsten or halogen lighting.

Lighting Kits
LoPresti pioneered the HID aftermarket six years ago, but competition soon followed and prices have plummeted. For comparison purposes, we obtained sample kits from LoPresti Speed Merchants, Knots2U and XeVision. We examined these products carefully and had our local shop, Sarasota Avionics, review construction quality and clarity of instructions, with an eye toward obtaining installation approval from the local FSDO, something that can be maddeningly difficult in some areas.

We bench-mounted the lamps at the same height as the landing/taxi lamp in our Mooney and measured their light output with a Lutron meter along a measured range chalked on a closed runway at Venice, Florida. The results of these evaluations are summarized in the “HID: How It Works” sidebar.

A fifth company, Royal Atlantic Aviation in Jacksonville, Florida, doesnt yet market kits but specializes in custom installs in piston and turboprop twins, but it will consider HID installations in any aircraft. Royal Atlantic uses LoPrestis hardware and during our visit, Don Beaty showed us a nifty HID system that replaces the archaic retractable wingtip landing lights in twin Cessnas with an entirely new wingtip design, along with an HID lamp on the nosegear.

Pricewise, LoPrestis Boom Beam is the highest, ranging from $948 to $1998, while RMD and XeVision are the least expensive at $495 and $499.Knots2U and Precise Flight occupy the middle at $550 and XeVision sells a 50-watt HID for that price, too. Royal Atlantics prices vary by aircraft; contact the company for specifics. Beaty told us Royal Atlantic charged $4000 for the multi-HID set-up in the Cessna 421 we examined.

When we examined the kits with Sarasota Avionics Kirk Fryer, we all agreed that LoPrestis Boom Beam was the most complete kit with illustrated installation instructions that should make the FAA approval a breeze. Only LoPresti supplies all the small parts and pieces necessary for the install, including wire routing and adhesive for no-drill mounting of the ballast. The Knots2U/Precise Flight and RMDs kits consist of simply the ballast, cabling and lens/bulb assembly, along with a basic installation drawing and STC paperwork. Shops are on their own for any work necessary to make the lens fit the mounting.

The XeVision kit was sketchier. The company specializes in systems for the OEM market, not the aftermarket, so rather than providing an STC or approved model list, youre left to your own devices to download a sample Form 337 approval from the XeVision Web site and submit that to the local FSDO. In some regions, that will be easy enough, less so in others. Any competent mechanic-or owner, for that matter-should be able to install HID using acceptable methods, but theres no question the LoPresti kit is the most complete.

We noted that cabling and lenses in the kits vary in detail, but all looked to be of adequate quality to the task, with good quality connectors and hardware. LoPresti uses what it says is a proprietary shielded cabling and, as do the other companies, it offers lenses in landing (narrow), taxi (wide) and intermediate angles. The Knots2U kit had cable ends with the best weather booting, in our view.

Bench Tests
The 35-watt systems performed similarly, as shown on page 15. Although the LoPresti Boom Beams light output appears slightly lower than the Knots2U product, this is due to the intermediate focus of the lens. The Knots2U lens was a narrower focused landing light. Observed brightness and ability to see our reflective target clearly were the same for both lights.

The real stunner was XeVisions 50-watt lamp, whose brightness is best described as stupefying. Our target holder squinted in discomfort as he walked downrange to collect intensity data with the light meter. The 50-watt HID delivered more light at 600 feet than our stock light did at 200 feet. A couple of these lamps mounted in the wings would turn night to day on a dark taxiway.To check for electromagnetic interference from the ballast and wiring, we used a portable VHF radio and a Garmin 195 portable GPS. All of the systems hashed the radio when it was within a foot of the ballast and wiring. LoPresti claims to have superior shielding, but our trials showed all of the systems emit RMI. We agree with Royal Atlantics Don Beaty, who say that any HID system be installed at least a foot away from any navigation or communication antenna or wiring. We observed no splattering of the GPS signal from any of the systems.

Squabbles
Having pioneered HID in light GA, LoPresti was forced by the FAA to conduct extensive testing in various models of aircraft to pursue individual STCs.The FAA later agreed to an approved model list for approvals. Curt LoPresti told us this expensive testing is one reason why Boom Beams are more expensive than competing systems. He complains that Knots2U and Precise Flight are selling automotive systems that havent been sufficiently tested and could cause interference to communication or navigation.

Further, says LoPresti, his competitors used a backdoor procedure to obtain FAA approvals by simply specifying a different bulb for RMDs wingtips, without any additional testing. LoPresti says the FAA concedes the error but wont rescind the RMD/Precise Flight/Knots2U approvals.

Knots2U and RMD contest this claim, however. Knots2Us John Bailey said the FAA didnt require EMI testing when the HID system was submitted for approval, but because the company wants to install these systems on larger aircraft and obtain a wide ranger of STCs, it has recently completed and passed RTCAs DO-160 RMI test procedure. RMD is partnering with Knots2U for this testing. Our trials reveal that all of the systems generate some electrical noise, including the Boom Beam.

Conclusion
No one ever accused the FAA of fairness so while were sympathetic with LoPresti having incurred more testing costs than later entrants in the HID market, thats the way competition works. The Knots2U/RMD/Precise Flight kits are competent and workmanlike, but at around $500, theyre definitely without frills. Theyre a terrific value well within the range of even owners with modest budgets. We think theyre installable in many airplanes, so theyre the hands down best value.

Depending on the airplane, the Boom Beam may cost four times as much as the other kits, but for the additional money, you get a more sophisticated kit for your mechanic to install and better paperwork. Some shops will like that, some wont care. We think its possible that in some areas, the Boom Beam will be approveable when the other systems might not be. Either way, performance is equal. The Boom Beam components are attached with adhesive, so there are fewer holes to punch into the airframe, a plus.

We think HID lighting is a compelling addition to any aircraft and we would favor a 50-watt over a 35-watt system. XeVision already has such systems and Precise Flight says it soon will have. Look for more competition and innovation in this area. LoPresti has staked out the high end of this market and says an economy-priced kit it offered met with poor response.Nonetheless, competing kits, regardless of price, still match the Boom Beams performance and are thus worthy of consideration.

Also With This Article
“HID: How It Works”