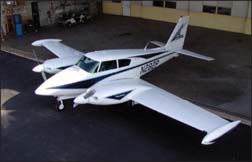 Cheap As It Gets
With regard to your article about GPS on the cheap in the April 2006 issue, I am thinking of nominating myself for Bottom Feeder of the Year award for this one. The Apollo 602 loran in my Cessna 182 hasnt worked for awhile. I bought a used Apollo 618 with Form 8130-3 and a spare loran antenna in my first eBay transaction for $82.51 (plus shipping).

The seller didnt bother to insure the item or to ship it overnight, even though I paid for both. It arrived with the antenna poking out through the side of the box because of a poor packing job, the database is seven years old, but it fits right in the panel and it works!

Comanche Payload
Your article on Twin Comanches in the April issue is excellent. But one note: A full-fuel Twinkie (120 gallons) such as mine has 600 pounds payload, not 500 pounds as stated in the article. It sounds like you may not have taken the tip-tank upgross into account.

The tip-tank STC increases the max gross by 120 pounds because the fuel weight is redistributed across the wing structure. For example, my empty weight is 2450 pounds, 114 gallons of 100LL is 673 pounds which leaves me with 602 pounds payload for a max gross of 3725 pounds. If I didnt have turbos, my full-fuel payload would be closer to 650 pounds.

While were setting the record straight, the Comanche pictured here, which appeared in the article, does indeed belong to Brian Williams but it doesnt have LoPresti cowlings, as incorrectly noted in the caption.

Sportys Gyro
It is obvious that Aviation Consumers goal is to provide pilots with unbiased and accurate information so that they can make proper purchasing decisions. This becomes especially important when considering avionics and aircraft instrumentation. Regarding your October 2005 article on the Sportys attitude indicator, you may wish to inform your readers of the following important factors.

All the attitude indicators you mentioned look the same from the outside; however, its whats on the inside that counts. Although a brief look conducted by an instrument shop may be nice, it is no substitute for qualified and measurable testing. What really counts is performance. I am not aware of any testing data available on the Castleberry gyro.

Mean time between failure (MTBF) provides a rating as to the durability and the lifespan expected from an instrument like an attitude gyro. The Mid-Continent 4300 gyro is rated at 7500 hours MTBF. Thats more than three times that of our nearest competitor, the well-respected L3 attitude indicator. Is there a rating on the Castleberry gyro?

The Mid-Continent Lifesaver gyro has been tested to meet RTCA DOl60d specifications. My research shows that competing products have not conducted similar tests. This is likely an indicator of the components integrity and the long term value that an aircraft owner will receive in normal operations and in the harsh environment of aircraft performance.

This is especially crucial for serious IFR pilots and people who make their living flying aircraft. Although you provided some assurance to your readers of the dependability of Sportys and Castleberry Instruments, it is important to note that Sportys has little or no experience selling aircraft instruments or gyros.

They do not have any in-house testing, design or engineering facilities nor is there a repair network set up to support the Castleberry gyro. Mid-Continent operates one of the largest overhaul/exchange facilities in the world and we do not have the manuals required to overhaul, repair or certify the Castleberry gyro. In fact, the Castleberry Company manufacturing this product bears little resemblance to the former overhaul facility and manufacturer that was based in Austin, Texas. It is a new company with a short track record and limited representation in our industry. It is important that every pilot has reliable instrumentation and quality backups for IFR operation.

We asked Sportys and Castleberry to reply to Winters letter. We were told that the Sportys gyro has a two-year warranty, twice that of other instruments in this market. The gyro is certified to TSO C4c and while Castleberry did not conduct extensive MTBF testing, it did so because it believed this would add cost to the product that wouldnt be of value for a back-up gyro.

The contention that Castleberry is new to the business is misleading. While the company has reorganized, it has operated in the same location with many of the same personnel since 1975. Moreover, Sportys has been in business for more than 40 years. For the time being, Castleberry is retaining repair and service work inhouse, but if demand warrants it, the company says it will distribute service documentation to other repair shops.