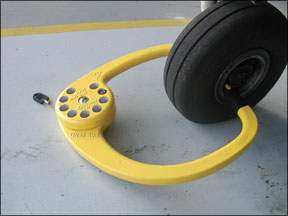 Having had my Cessna T210 stolen in Mexico, I read your article on anti-theft gadgets with interest. I think your choice of the term “gadget” is most appropriate as I doubt if any of these products have proven efficacy.

On the day my airplane was stolen, I had a wire cable lock made by the company that manufactures The Club around the prop and a JK Products throttle lock in place. Obviously, neither of these products provided any protection for my airplane.

I contacted JK, thinking they would want to know of the failure of their product. They had no real interest in my report. My conclusion is that anti-theft gadgets may deter an amateur thief, but if a professional wants your airplane, they afford very little if any protection.

I wish there were a STCd GPS-based tracking system to promptly locate a stolen aircraft.

You continue to produce an interesting and timely magazine which I enjoy greatly. Your article on datalink versus sferics was relevant, as I am building an RV-9A and am starting to plan the avionics I would like to have.

The recommendations of the article are opposite to what I would have thought, but it just shows how much progress has been made with datalink technology and this is why I read your magazine.

I do have a question: What is the geographic coverage of the datalink systems and would your recommendation change if you were flying outside the continental USA?

I live in Canada and would like to know if I invest in only one system, at what latitude does the coverage end? I am sure this question is also relevant for your Alaskan readers and any pilots who fly south into Mexico, Central and South America.

The problem is twofold, but soon to be addressed. Until recently, XM Radio coverage in Canada was limited and Canadian ground-based weather radar wasnt available. However, XM recently adjusted its satellite coverage footprints to provide service in Canada to about 60 degrees north latitude, or nearly halfway up Hudson Bay. Further, Canadian ground-based weather radar will shortly be available and WxWorx told us it plans to offer this service by early 2007.

I appreciate your article on personal flotation devices and I understand your decision to limit it to units with USCG or TSO approval. There are a lot of floatplane pilots, however, who need a constant-wear PFD and whose main risk is not survival in the warm Gulf of Mexico, but going into cold water 100 yards offshore in remote areas and then needing to survive until rescue.

As the USCG points out in its underwater egress training classes, “If its not on your person when you go into the water, its not survival gear, its just camping gear.” Mr. Carluccis article on a real-life ditching bears this out.

None of the PFDs you list, including the Switlik, have enough pockets for sufficient survival gear for remote flying (satphone/ELT, food bars, space blanket, first aid gear, mirror, matches, flares or laser flare).

The closest I have been able to come is the Stearns 1443 Aircraft PFD, but it is not USCG approved and has only about 30 pounds of flotation. Have you evaluated any other units that would be of greater use to floatplane pilots?

Actually, our evaluation of marine products ignored Coast Guard approval, since one of the best PFDs isnt CG approved. We can get all of the stuff you list in our Switlik vest, plus an attached fanny pack with additional signaling gear. For cold water float operations, we think a survival suit is the next step.

You will probably be bombarded with corrections to Russ Niles comment about the slogan, “Ask The Man Who Owns One” in the Cirrus serial number one report.

As all us old timers know, it was Packards slogan, not Buicks.

You are absolutely correct. Niles shall remain blameless, however, as the editor inserted that comment, knowing full well that it applied to Packard, not Buick. A mental lapse caused the latter to be inserted in place of the former.