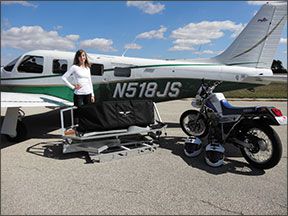 If for no other reason than adventure, flying and motorcycling are crossover sports. But that’s not the reason why MotoPOD founder and engineer David Shelton invented the MotoLOAD—a series of ramps and fixtures that allow pilots to load and secure an aviation-specific 225-cc motorcycle inside the cabin of a Piper

Cherokee Six, Lance, Saratoga or Seneca.
Instead, it’s the inconvenience of arranging for ground transportation once you land at your destination that created the idea. According to Shelton, only one-third of public airports have easily accessible ground transportation. This is one reason why Shelton believes that personal airplanes are drastically underutilized.
Bring your own motorized ground transportation at every single airport. That’s the concept that sparked the idea of the MotoLOAD system. The motorcycle loading and storage system is only for Piper applications, but the company is working on a system that will fit the Beech Bonanza, Baron and Cessna 206.

Seeing is Believing
We expected to see MotoPOD’s idea of a motorcycle to be some puny scooter or motorized bicycle (no disrespect to the riders of these cycles, but we’re critical sport bike and sport tourer jocks). Instead, the system uses a custom-modified 225cc motorcycle that the company calls the MotoCYCLE. For those not versed with street-legal motorcycles, a 225cc bike won’t break any speed records, but it’s no slouch, either. The company says the bike is highway-safe and has a top speed of 85 MPH. It’s also capable of two-up riding, which means you can carry a companion. Don’t forget to bring a backpack for the destination because that’s all you’ll be able to bring along once you put a leg over.

The 220-pound MotoCYCLE is designed for reliability and safe air transport. It’s modified around a Yamaha XT-225 frame and engine and has a modified fuel and oil system that’s spill-proof. The fuel tank is fitted with a venting system that’s appropriate for cabin altitude. This eliminates having to drain the fluids before loading the motorcycle into the aircraft. MotoPOD can provide a motorcycle, modify a customer’s motorcycle or they can help customers locate a used or new motorcycle. Each motorcycle is fitted with custom graphics to match the paint scheme of the aircraft.

Mod It—To Load It
To fit the motorcycle into the cabin, the handlebars and foot pegs are folded and the center stand is removed. But there’s far more tweaking involved to get the system to fit in a small cabin.

The modification includes replacing both the front and rear wheels on the motorcycle with smaller ones to obtain a smaller overall footprint. The suspension is lowered and carbon fiber fenders are installed to reduce the overall weight.

When it’s folded, the motorcycle measures 12 x 64 x 34 inches. Shelton told us that other “real” motorcycles can’t be modified to work with the MotoLOAD system, given the level of modification that’s performed to the Yamaha XT-225.

Fly to Ride
MotoPOD says the entire system can be loaded or unloaded in just a couple of minutes. First, the motorcycle is loaded onto a rolling sled, where it sits in fiberglass cradles. The sled is tipped to the horizontal position and then winched up a ramp and into the rear passenger door. The system has a built-in winch that’s powered by a cordless drill.

Once inside the aircraft, a pivot board swings the motorcycle into the cabin, where it’s positioned into the foot well. The system is secured into place using an integral tie-down system that uses a combination of ratcheting straps (manufactured by Hooker Harness). These straps attach to the existing seat belt buckles.
Removing the bike, says MotoPOD, can be accomplished in 90 seconds. You simply winch the system back out of the cabin, unfold the handlebars, unload the bike from the sled and ride away.

For most PA-32 and PA-34 aircraft, you can carry the loading system, the motorcycle, two average-sized adults, full fuel and a bit of luggage.

Storage Options
MotoPOD builds custom belly pods, made from composite materials and can accommodate cargo up to 8 feet long. Where conventional pods are loaded through a small hatch, the MotoPOD is loaded from the top. This makes it easier to load a bicycle or other large items. The external pod—that can fit on the belly of a Van’s RV and Cirrus SR22, to name a couple of applications—has an empty weight of 50 pounds and a gross weight of 250 pounds. Expect a speed penalty of approximately 9 knots.

The belly pod allows you to carry the MotoCYCLE (with front wheel removed), using removable cradles that attach to the floor of the pod using thumbscrews. Pods can be customized to carry camera equipment, antennas and other special-mission gear. Pricing is based on custom configuration. The company obtains FAA approval on a case-by-case basis.

The MotoPOD and MotoLOAD system, including the motorcycle, starts at $15,000. While this isn’t cheap, Shelton is convinced that the right customer will enjoy the benefits of an expanded mission.

“To put it in perspective, $15,000 includes a custom aviation motorcycle and a seamless loading system for about the cost of an average Harley. Based on the time savings, it’s the ultimate speed mod.”