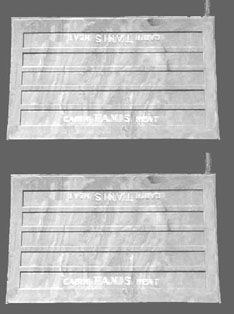 If you live north of the Mason-Dixon line, youre likely familiar with the Tanis engine pre-heater system. Ive owned a couple of airplanes and wouldnt have one in a cold climate without the Tanis system. With this system plugged in, the engine stays warm and ready to go all winter.

However, the bone-chilling cabin is another story. Both my wife and my avionics protest a chilly day takeoff; the engine may be toasty but the cabin is miserable. LCD displays take quite some time to reach full brightness in such conditions.

Tanis answer to this is a cabin heater system that consists of two heated mats, with male 110-volt electrical plugs attached to each end. To use the mats, you simply lay them on the floor of your aircraft in front of the pilot and co-pilots seats and plug them in.

Thermostats
The mats have a self-regulating heating element laminated between two layers of silicone. The heating element turns on at 42 degrees F and turns off at 68 degrees F. When operating, the heating element raises the temperature on the top of the mat to about 250 degrees F-definitely hot to the touch-producing 500 watts of heat.

Amazingly, however, if something is dropped on the mat, power to that portion of the mat will decrease, while the remaining parts of the mat remain hot, an impressive capability that I have seen and felt. Tanis offers two sizes of mats, either 32 x 8 inches or 12 x 18 inches, both of which weigh about two pounds. The larger size fits perfectly on the floor of my Cessna T206H. Tanis advertises that the mats will heat a cabin to 35 degrees F above the outside temperature of an unheated hangar.

For extremely cold climates, Tanis recommends an insulated interior cabin cover that confines the heat to the instrument panel. The pre-heater costs $475 and is offered in two colors, marbled gray and brown.

Installation
The primary problem I had with the two mats was the need for multiple extension cords: one for the engine pre-heater and another with two more prongs for the mats. When I mentioned this problem to Tanis, they told me I could connect the mats to the engine pre-heater and then power the entire assembly with one extension cord. But wait a minute…if these things are wired together and installed in the airplane, is there an FAA approval issue?

No, says Tanis, because the engine pre-heater isnt operating during flight, its merely considered baggage. Being the doubting type, my mechanic later called the local FSDO and they generally agreed with the view Tanis advocated so thats what we did.

I acquired the necessary wiring and plugs-owner supplied parts-and tying the engine system to the cabin system was a breeze, although it did require making room in one of the firewall access holes for the wiring.

Other than personal comfort, another advantage of a warm cabin is that the avionics are also warm and ready. Before the cabin pre-heater, my three LCD screens barely came to life at all until theyd been on for a few minutes and warmed up from internal heat. Now they come up to almost full brightness immediately.

The only problem that Ive experienced is that occasionally one mat is hot while the other is cold. Thinking that one mat was bad, I switched them. They both worked for awhile, then I got another split performance. Tanis tells me that theyll fix the mat if I can ever figure out which (if either) is not actually working.

In conclusion, the Tanis cabin pre-heater is quite good as a stand-alone product, but when connected to the Tanis engine pre-heater, it becomes an outstanding, easy-to-install accessory, assuming your mechanic is as cooperative and skilled as mine.

-Lionel Lavenue is a Aviation Consumer contributor. He lives near Washington, D.C. Contact Tanis at www.tanair.com/ or 320-634-4772.