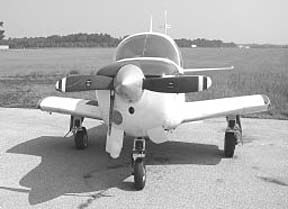 Look, I dont get emotional about this airplane stuff. Really, I dont. But this…this is almost enough to make a hard boiled cynic cry.

Recall that our Mooney 201, N3880H, suffered an engine failure on takeoff from Beaufort, South Carolina in April of 2002. Fortunately, no one was hurt but the airplane was declared a total loss by the insurer, USAIG.

The adjustor vowed that the airplane would never fly again and, true to his word, he had the Mooneys wings rudely sawed off and the airplane was ignominiously auctioned off for scrap. We thought that was the end of it but there was to be at least one more chapter in the life of N3880H. (We hope this is final chapter. Were ready for closure now.)

No Hope
Beaufort is in the South Carolina low country and is thus surrounded by saltwater marshes. And thats exactly where the airplane came to rest after the engine quit, mired up to its wings in salty muck.

There it sat for three days until a recovery crew could waddle into the mire and recover it to the airport pavement. After inspecting it, USAIG announced that due to water incursion, the airplane was a total loss and they would be sending a check.

Without undue delay, the claim was settled and we moved on. Yet, the nagging question remained. Could we have saved the airplane? Did the insurance company do us wrong by totaling it?

In one of those rare turns of the screw one might generously call a second chance, we think we can answer this question. We can also gain some sense of how well anti-corrosion compounds, specifically CorrosionX, actually work. (Good but not a miracle.)

This is Awful!
In late summer, I got an e-mail from a friend saying hed found something of interest on eBay.com. Isnt this your airplane? he asked.

Sure enough, it was N3880H, in parts and pieces and looking just terrible. As if to add insult to injury, the salvors had whacked off the wings a few feet outboard of the roots but otherwise left the airplane intact.

So there it was, standing upright on the gear, fully cowled, prop in place and seemingly ready to fly…but with four-foot stubs for wings. The right cowl flap drooped ignominiously. Oh, the inhumanity!

Kent Simmons, an A&P from Wisconsin, bought the airplane from the insurance company for the firewall-forward items. Hes converting a 1966 C-model Mooney to the IO-360 Lycoming engine. He trailered the airplane from Georgia to Wisconsin.

Our curiosity killing us, we wanted to know what he found in the engine. Did any evidence emerge as to why it quit? I have the engine and have disassembled it, he told us, but I have found nothing of interest. The fuel boost pump is obviously badly corroded and there are salt deposits in the fuel servo.

Nonetheless, the engine is overhaulable and will be put back into service. The reason for its inflight stoppage shortly after takeoff remains a mystery.

And how about the rest of the airplane? Just before the incident, it had been annualed and literally slathered with CorrosionX anti-corrosion compound. It was seeping from every seam and rivet hole.

We suspected this would protect the aluminum surfaces well enough but the larger concern was the 4130 chromoly welded tubing surrounding the cabin. The tubing is hollow and thus susceptible to water incursion.

Most corrosion is in the forward area of the fuselage as it likely sat nose down with the nosegear collapsed and the mains intact, Simmons told us. The 4130 has surface corrosion in numerous areas. Id like to cut some of it apart to see if it got inside and how much it has damaged the tubing.

He said he found more corrosion in the rudder pushrods beneath the pilot seat but most aluminum components survived in good shape, despite the delayed removal and lack of flushing after recovery.

The brakes and wheels took the worst of it, as they are magnesium and corrode easily, he adds. But the larger question is this: could the airplane have been made airworthy again?

Could it have been repaired?That is a tough one for me. I suppose so, with the proper cleaning early on. Im not sold on the CorrosionX, as it is only applied to certain areas and it is difficult to determine any benefit in those areas that were submerged in the salt water, Simmons adds.

Labor of Love
He believes that if the airplane hadnt been cut up, it could have definitely flown again if restored by an owner-mechanic.

A major tear down/restoration would have been in order, but lots of guys would be willing, especially for a 201 at the right price, he adds.

But he believes that its unlikely that any shop could be convinced to do such restoration for an owner or broker, given the looming concern about ongoing corrosion. The risk of continuing corrosion would simply be too great.

Conclusion: were still satisfied that the insurance company made the right call. CorrosionX or not, the airplane would be an ongoing corrosion pit and even if it never became an economic repair issue, we would certainly have been chasing spot corrosion for years. Case closed.

Well, not quite, perhaps. If we take any comfort in this adventure, its this: Even after its slide through the mud, 80H went out in a transcontinental blaze of glory through the nations heartland.

We had our picture taken at least 15 times on the drive from Georgia to Wisconsin, Kent Simmons told us. I guess you dont see them trailered this way very often.

Amen to that, brother. I hope to never see one like this again.