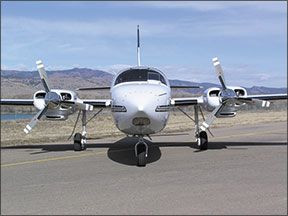 The smart money says that buying a used piston twin is crazy when avgas costs seven bucks, an engine overhaul runs north of $30,000 and often a twin isn’t that much faster than a comparable single. After looking at the stunning collapse of piston twin prices in this century, we’re tempted to simply say the smart money is right and let things go. The problem is, it’s just not that simple. If you want serious transportation and are realistic enough to know it ain’t cheap, then current prices may mean the right decision for an airplane to go places is either a pressurized piston twin or 170–190-knot light twin.

As a side note, we recognize that airplane purchase decisions are not always steely-eyed, economic choices; they are heavily affected by emotional factors (“I know the chance of engine failure in a single is low, but I fly IFR at night, over the Great Lakes, where there’s ice.”) We never, ever forget that when selecting the family airplane, a happy spouse is often the deciding factor, so space and comfort matter and may tilt the economic equation toward the airplane with the better cabin.

Traveling Machines
Few pilots buy a piston twin for the purpose of going for a $500 hamburger or watching the sun go down—they want traveling machines. As such, the decision to buy a twin versus a capable single starts out with an objective look at the variables of speed, range, useful load with full tanks, cost of operation, avionics and ability to deal with weather. It then moves into subjective areas—cabin comfort, pressurization, perception of safety, required skill level and dispatch reliability.

That moves the evaluation into what really matters for an airplane doing what airplanes were built to do—go somewhere fast. The entry-level cruising speed for piston twins is on the order of 150 knots—except for the Piper Apache, but it’s a special consideration, (see the sidebar).

Because speed matters, an early part of any single-versus-twin evaluation involves direct speed comparisons. Therefore, the singles to be matched with twins are the Cessna 210, the retractable 182s and Corvalis, Piper retractable Saratoga series and the Malibu/Mirage/Matrix, Beech 36 series, big-engine Mooneys and the Cirrus SR22. As a reference, a decent, normally aspirated 1980 Cessna 210N has a Bluebook value of $90,000. Other than for the retractable 182s, the prices go up from there, with the top-of-the-line, glass-cockpit singles in the million-dollar range, especially if you want pressurization.

Operational Costs
To be realistic in the single versus twin purchase decision, we are convinced that the overall cost of operation of a piston twin should be considered to be three times that of a comparable single, rather than twice. That may seem overly conservative, but we’ve been there. The added complexity of systems to care and feed two engines (think four, six or eight fuel tanks with crossfeed plumbing), training required by insurance and the proclivity of FBOs to charge more for twins, even for parking—despite their having the same tiedown footprint as a single—our experience as twin owners and feedback from users is that three times the cost of a single usually comes pretty close to the mark, depressing as it may seem. If nothing else, let’s just say that if you plan for three times the cost of a comparable single, you aren’t likely to be financially surprised.
With that as background, let’s look at a selection of the most popular piston twins by category to see if there are any that might be a deal.

You can fill the seats and the tanks in most of the 182RGs and TR182s, something not possible in the light-light twins. While an early Travel Air is half the price of a competitive single, corrosion on some of the magnesium parts in the airframe and having to overhaul one engine can erase that advantage in a hurry.
The Twin Comanche and the Cougar are rightly touted as fuel-sipping twins, but with the more-comfortable cabin, the retractable 182 series, at the same or slightly higher purchase price and lower fuel burn, makes more economic sense.

Additionally, the fact that another comparable single, the Cirrus, has an airframe parachute, makes the redundant engine of a light-light twin seem a little less worth the money it costs for perceived safety at night or in IFR.

Over mountains, no light-light twins have a single-engine service ceiling that will allow staying above the rocks, although “drift down” from higher altitude does give a wide radius of action before the service ceiling is reached.

In our opinion, from a strictly economic point of view, the comparative price and capabilities of singles mean a light-light twin doesn’t make sense in this market.

Light Twins
Taking the next step up, we get to the Beech Baron series, Piper Seneca and Aztec, Cessna 310 and 337. All have engines of at least 200 HP and cruise speeds of at least 160 knots (well, sort of; the 337 falls a little short), with the short-bodied Baron doing an honest 190 knots and turbocharging pushing speeds well over 200 knots at altitude.

This is the entry level, in our opinion, for serious traveling machines. The airplanes are often equipped for known icing. In most cases, insurance coverage requires pilots to take recurrent training annually, a two- or three-day exercise.

System complexity becomes an operational and maintenance issue. An Aztec has four bladder tanks that aren’t cheap to replace and a hydraulic system that needs to be maintained aggressively—plus, just checking the fluid level requires putting the airplane on jacks and retracting the gear. A 310 can have as many as six fuel tanks, with limitations on which can be used, when—turbocharged versions have exhaust systems that require maintenance by someone who knows them.

Corrosion is a serious issue on all older airplanes, with the overwing exhaust versions of the 310 having a bad reputation. We have seen mid-1960s 310s on the market for as low as $14,000 recently, but a casual look indicated that making one airworthy would cost more than the roughly $50,000 Bluebook value.

We think the light twin class of piston twins mark the crossover point to where purchase prices are low enough to make economic sense. Even with the cost of twice as much fuel, three times the maintenance and refurbishing the avionics and interior on top of a $130,000 purchase price, a light twin can fly a long way for many years before the owner catches up with the price and operating cost of a $300,000 single that can’t carry as much, has a smaller cabin and may or may not go as fast.

Cabin Class Twins
At the top of the multi-engine piston heap, both pressurized and unpressurized, are the ones that have an airstair door: the Beech Duke, Piper Navajo series, Cessna 335, 340 and 400-series and Aerostars. We’ll stick the Pressurized Baron in here, even though it has an overwing entry. We’ll also mention the last versions of the Twin Bonanza, with airstairs and a stunning ability to haul a load.

Many of the unpressurized cabin twins continue to be popular in the Part 135 world, where they can earn their owners a decent return flying charter customers or freight. However, we’ve observed that owner-pilots tend to migrate to the pressurized birds, apparently figuring that if they are going to pay the price of buying, feeding and maintaining a cabin-class twin, the extra price for pressurization isn’t that much for the benefit it provides—so we’ll concentrate on them.

The Cessna 340, once equipped with VGs and a gross weight increase, goes from a load-challenged machine to a very nice, personal hotrod. With virtually the same engines as the 414, the smaller—but still comfortable—cabin means it’s faster. Values run from $120,000 to $230,000 in its 1972 to 1984 production run.

Beware the care and feeding of the GTSIO engine on the 421s—they do not suffer misuse lightly and overhaul runs $47,000. Buying a 421 and discovering it had “issues” has proven financially catastrophic to more than one optimistic owner.

Watch for corrosion and look at 340s carefully—for some reason we’ve seen a surprising percentage that appeared to have been run hard and put away wet too often.

The Aerostar line, the fastest of the twins, was the brainchild of the design genius Ted Smith. What aficionados refer to as design features, others call quirks. Regardless of terminology, Aerostars go like crazy and require that a pilot be on the top of his or her game as well as be willing to assertively stay on top of maintenance.

The pressurized 601P will outrun some turboprop twins while burning 40 GPH rich of peak. We think that the 601P line is slightly undervalued at a range of $120,000 to $180,000. However, we recommend a potential buyer go in with eyes wide open, join the owners organization, make certain there’s a maintenance technician nearby who knows the ins and outs of the breed and be prepared to take serious recurrent training.

he only single that compares with the pressurized, cabin-class twins is the Piper Malibu/Mirage. With a value range starting at $215,000 and going up to $1 million, it provides a great deal of food for thought for the potential buyer of a pressurized piston airplane. A buyer who has the wherewithal to spend $400,00 on an airplane and desires pressurization can find a very nice Malibu or Mirage. For the same money, he or she can buy a pressurized twin with mid-time engines, spend $70,000 to refurbish it, fuel and maintain it for several years, and carry more in greater comfort while going as fast or faster. We think it makes sense.

Conclusion
Is it time to buy a twin? If you want to fly inexpensively, or even for what some would call a reasonable amount of money, no.

For the pilot who has a need to travel some distance and deal with weather, wants comfort and recognizes that to get speed and capability in an airplane, there’s no free lunch, a light-light twin probably isn’t worth the total cost, but a light or pressurized twin may prove to be precisely the right airplane.