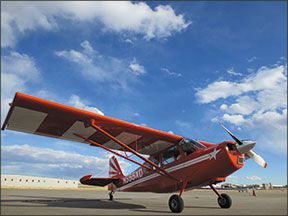 Sometimes you just want to throttle the marketing types. Hanging the purposely edgy “Xtreme” name on the new Decathlon brings to mind a machine with handling that you’re lucky to survive and of no practical use outside of aerobatics.

It doesn’t accurately describe the new Decathlon’s remarkable combination of superior aerobatic capability, excellent air and ground handling and good cross-country capability that put it head and shoulders above all previous iterations.

History
This year marks the 50th anniversary of the original Citabria, which was, more or less, an Aeronca Champ toughened up for aerobatics. It eventually became the standard of reference for good ground handling for tailwheel airplanes. The 150-HP, inverted fuel system version—7KCAB—became known as a very good basic aerobatic trainer.

The constant itch for just a little more caused the 1972 birth of the Decathlon, known as the 8KCAB—effectively a 7KCAB with a shorter, symmetrical wing and the ability to take much higher loading: +6 and -5 G. It proved to be an even better aerobatic trainer as it did both inside and outside maneuvers reasonably well.

As with the Citabria, its ailerons were heavy. For those wanting to do vertical maneuvers, the draggy airframe and 150 HP meant that a good pilot could get a half roll going up before the airspeed went away and a hammerhead turn was needed. Useful load wasn’t particularly good—with two people and chutes only about half fuel could be carried.

In 1976 the 180-HP Super Decathlon went into production. The 30-HP bump nicely increased the rate of climb and gave the airplane a little more vertical ability, allowing about ¾ of a roll on an up line, according to American Champion test pilot Jody Bradt. To improve roll control, spades—they look like little shovels—were hung under the ailerons. They worked, although more than a few pilots have cut their foreheads open on one during preflight. With the heavier engine, the useful load of the Super Decathlon proved poor—as trainers, the airplanes are often flown at or above gross weight.

Development
When American Champion was putting the final touches on its new version of the Scout—the Denali—with its new 210-HP, four-cylinder IO-390 engine, Lycoming passed the word that it was willing to make a version of the engine with inverted fuel and oil systems, the AEIO-390-A1B6.

The larger engine would add 39 pounds to the airframe of the Super Decathlon—effectively making it a single-place airplane. According to Jerry Mehlhaff, Jr., American Champion’s VP of Engineering, what was to become the Xtreme Decathlon went on a weight loss program that resulted in a 50-pound weight saving, before the engine change—an overall improvement of 11 pounds.

The aileron change was purely to save weight. The cross-section redesign was subcontracted to Kevin Kimball of Jim Kimball Enterprises, who reshaped the nose, moved the hinge line and made the ailerons fatter—the nose of each now bulges above and below the wing, similar to the design used by Aviat, Extra and on the Pitts Model 12. According to Mehlhaff, a happy, unexpected result was an increase in roll rate from 90 to 120 degrees per second.

A New Panel
The airplane we flew had a Garmin 795 with GDL 39 ADS-B receiver and an EDM 930 engine monitor. We were very surprised to find no inclinometer. The fuel quantity indicating system proved to be horribly inaccurate. Prior to our flight, a dipstick check of the left fuel tank showed seven gallons—the EDM indicated zero gallons in that tank. After we added three gallons, the EDM indication was nine gallons.

During flight, the fuel quantity indications varied dramatically. We later learned that American Champion agreed to rework the system on the airplane and install the direct-indicating float gauges in wingroots that have been the hallmark of Citabrias and Decathlons for years. They will be also be standard for the 2014 Xtremes.

Weight
We applaud that American Champion publishes loading for the Xtreme in both the Aerobatic and Normal categories. The gross weight in Normal category—no akro allowed—is 150 pounds more than in Aerobatic category, where the airplane is approved to +6 and -5 G. All aerobatic trainers we’re familiar with are tight on useful load—this particular Xtreme has a 478 pounds available, and that’s better than most.

The dual gross weights meant we could depart with two large adults and parachutes at a weight above the akro gross, but well within Normal category loading, shoot several landings and then fly out to the practice area. By then, we had burned fuel down to the Aerobatic gross weight and still had adequate fuel for our the rest of our flight, plus reserve.

The Normal category useful load is 628 pounds, which allows 388 pounds in the cabin with full fuel. The baggage allowance is 100 pounds.

AFM
Interestingly, there is no POH for the Xtreme—just an Approved Flight Manual (AFM). It is not in the GAMA format. It doesn’t include much of the information in a POH and, surprisingly, it presents speeds in MPH rather than knots. Nevertheless, it does provide needed information clearly and explains the different limitations for the airplane in the Aerobatic and Normal categories—such as two different maneuvering speeds (Va), 135 versus 110 MPH.

It also warned about something we’d never run across previously, detuning the engine counterweight system. Detuning results in “rapid and severe damage to the counterweights, rollers and bushings culminating in engine failure.” It’s caused by rapid throttle movement or high RPM and low manifold pressure.

Pilots are warned not to push the prop control forward on landing until it is assured there will be no increase in RPM. We’ve always complained about pilots who select high RPM on downwind because of noise; now Lycoming says it causes engine damage.

When flying aerobatics, it’s not unusual to blow a maneuver and wind up with the nose down and speed increasing dramatically, requiring pulling the power to idle quickly. The AFM recommends 2500 RPM, rather than the max 2700 RPM during maneuvering—which, we suspect, will help protect against detuning. We’ll be interested to see how the new Lycoming holds up in this challenging environment.