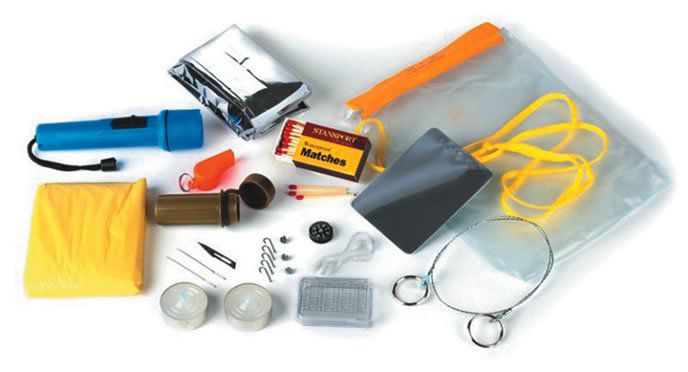 Every pilot considers the aftermath of having to put an airplane down other than where he or she desires. Every year some pilots are required to put such thoughts into action. Contemplating the worst and preparing for it is something pilots are trained to do-and part of being ready to implement an after-accident plan of action is having equipment available to carry it out. That means having a survival kit in the airplane.

There are dozens of commercially available aviation survival kits. We surveyed a cross section-they ranged from unacceptable to excellent, based on the quality and selection of items included as well as weight and size. Because weight and space are at a premium in general aviation airplanes, the best kits did amazing jobs of shoehorning a lot of equipment into a small space and keeping weight under control.

We also noted that quality isnt cheap-a poor-quality knife that breaks when used for prying (a common use) might as well not have even been put in the kit. When lives are on the line, the equipment in a survival kit has to stand up to use in adverse conditions. Cheap gear can be deadly.
In our survey, we saw a tremendous amount of hype. We rapidly learned that terms such as military grade or combat were often code for poor quality. It made us think of low bidder military contracts.

Kits Under $100
The Survival Kit in a Bottle is one-liter water bottle on a carabiner to attach it to your belt or vest. It contains a multifunction tool, whistle, compass, flashlight with batteries, survival blanket, candle, waterproof matches, poncho, two chemical hand warmers and a zipper-lock bag. Available from multiple sources, its most commonly priced at $24.95.

The Combat Survival Tin from Aircraft Spruce is advertised as designed for the British SAS and also comes in a pocket-sized tin. For $29.95, it includes such things as a compass, whistle, candle, basic fishing kit, survival instructions, wind- and waterproof matches, pencil, cable saw and a flimsy folding knife with scissors, but no signaling mirror. We werent impressed.

For the best value and quality in a kit that will fit in a pocket, we recommend either the Adventure Medical Kit (AMK) Pocket Survival Pak or Pocket Survival Pak Plus. Both were designed by noted aviation survival expert Doug Ritter (full disclosure: Ritter was a contributing editor to Aviation Consumer and wrote several survival equipment articles).

The AMK Pocket Survival Pak Plus is available for $69.99 from PilotMall and includes all of the equipment in the basic Pak and adds the RAK Mk5 Survival Knife, a serious compact steel fixed-blade knife, LED flashlight sterile water bag, water purification tablets, 28-inch stainless ball chain and waterproof pouch. It weighs a total of 5.9 ounces.

At $69.95, Sportys (www.sportys.com) ill-named Complete Aviation Survival Kit provides a chance to save money by not buying it. There is no signaling mirror or knife, just a whistle and razor blade.

Sportys Emergency Ditching Survival Kit is a backpack kit produced by Mayday Industries. Maydays emphasis is on survival kits that will keep you alive for a few days rather than on rescue. (Mayday makes a large line of kits for situations where rescue may take a while.) For $89.95 and combined with a PLB, signaling mirror and a good survival knife, we think it is a fair kit for under $100. It contains a basic first aid kit, water and food, flashlight, orange survival tent, emergency blankets, waterproof matches, ponchos, a combination whistle and compass, gloves (something we think is too often overlooked), AM/FM radio, camp stove and boxcutter (a poor survival knife).

Kits from $100 to $1000
The Wilderness Survivor Survival Kit from Best Glide is priced at $299.95 and comes in a 8x8x15-inch Denier Cordura bag. For the price, we think this kit contains a good cross-section of equipment. For signaling it has a compact signal mirror, whistle, three light sticks and an Inova LED light. It also includes some food and water, survival guides, assorted means of starting a fire along with candles, a two-person survival blanket, two basic knives, a pocket saw and can opener, as well as a first aid kit that includes such things that are overlooked as insect repellent and diarrhea treatment. We would still add a high-quality signal mirror, good knife and PLB to this kit.

Another of the many kits offered by Aircraft Spruce is the Crashkit Charlie Survival Kit. It comes in a protective, Pelican case and is advertised as for the pilot with minimal knowledge of survival techniques. Priced at $344.95, it weighs four pounds and has 71 items providing assistance for food, fire, water, shelter, first aid and signaling. It also contains a first aid book and critical action card. The signaling mirror is gridded, which is an improvement over the very basic mirrors provided with most kits. For knives, it has a scalpel and multi-tool, but not a dedicated survival knife. We liked that it provided waterproof matches.

The Flight Level 220 Survival Kit Lite weighs 8.5 pounds and comes in a Pelican case that is 9×7.5×4 inches and is priced at $193.75 at Aircraft Spruce. Contents include a signaling mirror that can be aimed, a 57-piece first aid kit, emergency blanket, but no tent, snare wire but no wire saw, waterproof matches, whistle and a soft plastic water bottle. It has no food, but does have a 15-foot towing strap, of all things. The multi-tool is credit card style, so it has no pliers. Well take a pass on this $193.75 kit.

The $462.95 Military Pilot Survival Kit from Aircraft Spruce is advertised as having been designed by Oregon Aero for the U.S. Navy. It comes in a 6.5×5.5×2-inch pouch. It is not a complete survival kit by any means, lacking signaling equipment beyond a LED flashlight. We like the Gerber multi-tool and Air Ranger folding knife (a one-hand opening knife) for their quality. However, the remainder of the kit consists of just four items, a compass, sunscreen, balaclava and fire-starting system. For what wed save not buying this, well be able to go a long ways toward a much more complete kit.

At $420, the Canadian-Alaskan Survivor Pak (www.campingsurvival.com) is designed to help sustain two people for up to 14 days. It weighs 31 pounds and includes two 14-day food rations and 24 ounces of water along with fire, signaling and shelter equipment. There is no tent, but there are emergency blankets and a first aid kit. With the addition of a sleeping bag and a pistol, rifle or shotgun and ammunition, the kit is advertised as meeting the Transport Canada summer aviation survival equipment requirements. The kit is heavy enough that it eats into useful load in a smaller airplane, however, for the price, its attractive.

Sportys $799 Over Water Survival Kit contains the unimpressive Complete Aviation Survival Kit; despite that, its a good start for a true over-water survival kit because it has what we consider essential signaling devices. The floating survival bag contains four dual-cell life vests, a Firefly3 rescue light, ResQlink+ PLB and a signal mirror. We recommend wearing the life vests when flying over water. The fact that the kit floats is a plus.

We are aware of only one commercially available survival kit in a vest. Its the Essentials Aviator Survival Vest through www.dougritter.com. At $725, it contains everything we think should be in a survival kit except for a PLB (which we think a pilot should already have). The vest itself is made of cotton (not nylon, which can melt and cause serious burns during a fire) and contains 20 pockets, but has a flat back so it is comfortable to wear in flight. An illustrated in instruction manual included provides guidance for use of the contents which include the Adventure Medical Kit (AMK) Pocket Survival Pak, Stormproof matches, tinder, water purification tablets, AMK Ultralight First Aid Kit, Micro-Light flashlight, headlamp, AMK Heatsheet (1-2 person survival blanket/shelter), 50 feet of utility line, four water ration packages, flexible water bottle, sturdy gloves, rescue laser light, Ritter RSK Mk1 one-hand folding survival knife (its a $130 knife) and a Leatherman multi-tool as well as sunscreen, insect repellent, toilet tissue and lip balm.

We think this is the best quality for the value individual survival kit on the market for under $1000-and being able to wear it increases the chances of survival after an accident.

Top of the Line
While we caution against the word ultimate in aviation advertising, the Ultimate Aviator Survival Pak from www.dougritter.com approaches the definition. For the weight and price it is, in our opinion, the most complete aviation survival kit on the market. Quality isnt cheap; the Pak is priced at $2818.

Under miscellaneous, there is everything from parachute cord and utility wire through toilet paper, duct tape, a sleeping pad and illustrated guide to using the kit. As far as were concerned, the only thing not in this kit is a PLB.

After looking at a far less inclusive kit that weighed 31 pounds, we were surprised that this kit came in at 22.6 pounds.

Delivery normally takes four to six weeks-the kit is made up as ordered due to expiration dates on the food.

There are two add-on modules available. The .5 provides one more of many of the contents and costs $285. The Plus 2 is $850 and is an expansion of the basic kit for two more people.

Conclusion
The selection of survival equipment depends on personal comfort and the area over which you fly. At a minimum, we recommend wearing a vest containing a PLB, good survival knife, signaling mirror and either the Pocket Survival Pak or Pocket Survival Pak Plus. For flights over rugged or remote terrain, we recommend the Essentials Aviator Survival Vest and a PLB. For serious backcountry flying, the Ultimate Aviator Survival Pak.

No matter what you choose, if possible, we recommend that you have the kits equipment on your person when flying.

For more reading on the subject of surviving an accident, we recommend an article from our sister publication AVweb, Crashworthiness, Improving Your Chances When You Have to Put It Down (http://tinyurl.com/n6hsxfj) and the website of the not-for-profit Equipped to Survive foundation (www.equipped.org).