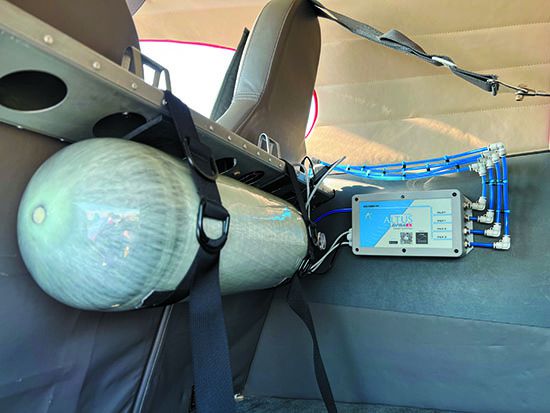 A deterrent for using supplemental oxygen—especially in tight cabins—is having to deal with the hardware, including the bottle and oxygen lines strung every which way. Aithre, which has been cranking out decent portable solutions, has developed a hard-mounted system called the AVI C. I took a look at the system at AirVenture this past summer where it was installed in Aithre founder Jim Ruttler’s Van’s RV-10.

That’s the key to the AVI C—streamlining the installation of the major components so all you and the passengers have to do is connect into the cannula plugs on the panel (for pilot and copilot) and wherever you can mount them in the cabin so passengers can get to them. Placing them next to the headset jacks makes sense to me. Of course, this hard interface is hardly new. OEMs have been integrating oxygen systems in aircraft for years, but we haven’t seen aftermarket installations like the AVI C. The system can be interfaced for up to six stations.

First, the approval. Aithre earned installation approval under the NORSEE (Non-Required Safety Enhancing Equipment) rule. Given the number of hypoxic crashes in recent years, it makes sense that this system can fall under NORSEE. It’s fair game for all Part 23 non-pressurized models, and Aithre specifically mentions Mooney, Cirrus, Beechcraft, Diamond and Piper. The installation can be signed off by any A&P as a minor alteration.

The idea behind the AVI C installation is to make it easy to access the oxygen. The interface includes a push-button control that’s mounted on the instrument panel that starts the flow of oxygen. There’s also limited panel-mount avionics integration. More on that in a minute.

The AVI C uses the same microburst optical flow sensing tech used in the company’s AVI8 smart pulse portable system it introduced at AirVenture last year. We covered it favorably in detail in the October 2021 issue of Aviation Consumer. The pulse-demand system provides impressive endurance, and Aithre’s Jim Ruttler told me the  aluminum-lined composite 925-liter bottle can last up to 95 hours at 14,000 feet.

The control unit (available in different configurations, depending on the number of oxygen stations in the cabin) accepts oxygen flow in from the oxygen bottle and outputs it across the output lines on the other side of the case. It’s pretty simple, and the outputs are labeled (Pilot, Pax1, Pax2 and so forth). The interface box is generally mounted in the tail section of the aircraft or behind a bulkhead as you would any remote avionics LRU, although there are distance requirements to the oxygen bottle. The four-place box I saw in the RV-10 weighs roughly 4 pounds, and the two-place version weighs half of that. You can mount it in any orientation for a flexible installation. All of the components for the breathing inhalation detection reside in this interface box, so there are no external parts other than the cannulas and the push-button panel switch. 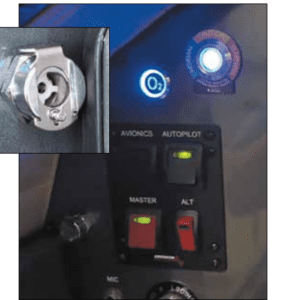 The electrical installation includes a 12-volt power and ground connection and the device has low current draw. There’s also an output for wiring to the remote oxygen button on the panel. For experimental applications, the interface box has an RS-232 serial data output for connecting the system to the Advanced Flight System displays, which have a dedicated onscreen Aithre environmental panel. The system can display oxygen status and other biometric data at a glance. There’s also CO2 data from Aithre’s CO detector. I’d like to see an expanded installation to include more panel displays, including Garmin and Dynon.

That’s the easy part. Plug a cannula into a port and press the O2 button and simply begin breathing normally. The micro- bursts start immediately upon inhalation and extend over the first critical portion of the inhalation cycle. The number and spacing of the microbursts are adjusted in real time and customized for each inhalation based on respiration length, pressure altitude and other factors. An advanced feature that’s not a requirement is Aithre’s Connect biometric app for iOS. This will provide pilot respiration rate, oxygen flow rate and also data from Aithre’s external pulse ox meters. You can also increase or decrease the amount of oxygen that is delivered for each of the users on the system.

The AVI C system comes complete with everything you need to install it, with the exception of the bottle. The kit has a custom Mountain High oxygen regulator, the control unit, the plumbing, mounts, silicone soft cannulas, fittings, control button indicator, plus free access to the iOS app. You can use any DOT bottle that is marked for aviation use.

Installation time will depend on how much of the interior needs to be removed to run the lines, so it’s best to install the system while the aircraft is opened up.

See a video demo of the AVI system at http://tinyurl.com/j95ht2a.