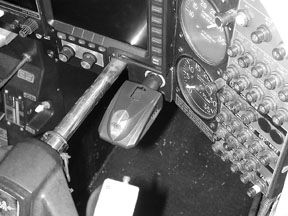 Back in the golden age of aviation, when we pumped exhaust straight in the cabin to keep warm and thought it was just fine, nobody worried much about carbon monoxide.

But as we reported in the October issue of Aviation Consumer, sniffing out the stuff has now become a cottage industry, with no fewer than a half-dozen detectors on the market, the latest coming from a company called CO Guardian, whose detectors bear the same name.

While some of these devices are merely household or industrial detectors pressed into aviation service, the CO Guardian is purpose-made for aircraft carbon monoxide monitoring. We recently purchased one from the companys Web site and flew with it for a couple of months.

Four Models
Although its been heavily promoting one model, CO Guardian actually markets four, three of which were introduced after we bought our unit. The version we tested-the Aero 152-sells for a recently announced $169, down from the $199 we paid for our test unit. A lower priced model, the $129 Aero 152WD, works similarly but lacks the higher-priced models digital readout.

CO Guardian also sells two panel-mount versions, the $299 Aero 252 and the $249 252WD, the former version with digital readout, the latter without. To avoid STC and other legal hassles, CO Guardian recommends the panel-mount models only for homebuilts but the company is pursuing an STC. In the meantime, you could install one under field approval.

One shortcoming of the household type detectors is that they operate either on line current or on batteries that have to be replaced. The CO Guardian 152/152WD are unique among detectors suitable for airplanes in that they draw power from the cigarette lighter/accessory plug. One detector we tested last fall, Simulation Systems and Applications KOMeter can be hardwired to run on ships power.

As for the CO Guardian, we like its power range, from 10 volts to 30 volts but the drawback here is this: If you own a Cessna with a decommissioned lighter socket, youll have to fix the wiring and reenergize it or shop elsewhere for a detector. Ships power is the only option with this product. Theres one other minor bugaboo: The CO Guardian is 5 inches long and protrudes from the panel some 3 inches. In our Mooney, when plugged into the lighter socket, it hides safely behind the right yoke but in some aircraft it will be exposed to an errant knee or chart board. Although the CO Guardian appears well made, we wonder how many odd knocks it will survive.

A Word On Standards
In our previous research on CO detectors, we were struck by how little consensus there is for accepted exposure levels. The Occupational Health and Safety Administration, for example, allows permissible exposure levels of 50 PPM for an 8-hour time-weighted average, at sea-level.

None of these, of course, take into account the effects of altitude, which may be considerable and are likely to vary from individual to individual and perhaps day to day for the same individual. The concern for pilots is not so much incapacitation as it is impaired judgment could lead to a fatal error.

Given the widely disparate exposure standards, pilots are left on their own to decide which to apply. We think a detector capable of alarming at 30 to 50 PPM within an hour is reasonable and conservative, considering that the data weve seen indicates very little if any hazard at sea-level for exposure to that much CO. This might also allow some margin for the unknown effects of altitude.

The CO Guardians low threshold, however, is set at 50 PPM and it doesnt begin to alarm until above that concentration level. For levels between 50 and 70 PPM, the alarm limit is 10 minutes and for concentrations between 70 and 150 PPM, the limit is five minutes. Above 200 PPM, the unit alarms in 3 minutes and above 400 PPM, it alarms instantaneously.

It has both a flashing light and alarm beeper similar in tone and volume to a pager. Like a computer, the CO Guardian has a power-on self-test feature which verifies that the sensing circuitry, warning lights and buzzer are working correctly.

After the self-test and in the presence of 50 PPM of CO or less, the unit remains in ready standby status, with a steady green light. Between 50 and 70 PPM for the alarm limit time, it shows a flashing yellow light and a digital 1. Above 70 PPM, a red light flashes, along with the beeper. At increasing levels of CO, the units continues to flash and beep, displaying increasing digital values.

As with the AIM household type detectors, the alarm-but not the flashing lights-can be suppressed by pushing the reset button, which doubles as the lens for the warning lights.

Guardian In Action
We tested the CO Guardian both in the aircraft alongside the AIM 935 low-level detector and in a car, using a plastic bag to contain pure carbon monoxide from test ampoules provided for the purpose.

As claimed, the CO Guardian alarms instantly at high levels of CO, flashing its red light and beeping insistently. Measuring its low-level tolerance was easy enough: In our Mooney, enough CO finds it way into the cabin during ground idle to set off the AIM detector in the 15 to 50 PPM range. As CO Guardian claims, this detector doesnt sense below 50 PPM at all. We consider that both good news and bad news. Its good because it doesnt squall nuisance alarms when a whiff of exhaust gets into the cabin, which it frequently does during ground operations.

Its bad because if you believe low-levels of CO are enough to cause impairment if not incapacitation, the CO Guardian wont detect them. If its indeed true that the effect of high altitude can cause impairment at low levels, youre better off with a more sensitive detector, in our view.

On the other hand, having flown with the more sensitive AIM 935 for six months, we have to admit its a little too sensitive by our lights, beeping away and drawing attention to itself during ground taxi when theres clearly no CO hazard. Once in the air, the cabin vents and the detected CO level drops back to LO or zero on the AIMs digital scale.

CO Guardians president, Ash Vij, told us he decided on 50 PPM primarily because its the only value mentioned in FAA certification documents and he was worried that nuisance alarms at lower levels would lead pilots to mistrust the gadget. Except for keeping cabin levels no higher than 50 PPM, the FAA has no CO standards.

Recommendation
Despite the wide choice in CO detectors, none of these devices are what we would call perfectly suited for the task in that none have the right combination of good price, reasonable sensitivity and convenient form factor.

In the CO Guardians favor is its small size. It will slip easily into a flight bag and could thus be used by a renter or a pilot flying several different aircraft; thats a real plus, in our view. Of course, if the cigarette lighter socket is disabled, as many are, that advantage evaporates.

Pricewise, the CO Guardian tends toward the top. Given its performance, at $169, we think the Aero 252 is somewhat overpriced and not an exceptional value. The $129 Aero 152WD, sans display, is more reasonable, in our view. So, what to buy? Although we arent thrilled with its tendency to nuisance alarm at low levels, the AIM 935 at $74.95 does more for less than CO Guardian and the AIM 696, at $44.95, is probably the best deal of the lot. It only displays at levels above 30 PPM but for about one quarter the price of CO Guardian, we think its still the best value overall.

However, if you dont see any hazard in cockpit CO levels up to 50 and you want an inexpensive detector to run on ships power, the CO Guardian isnt a bad choice, albeit not the best choice, in our opinion.

We think its more than capable of detecting and alarming a significant CO intrusion but its less effective at low levels which may (or may not) cause symptoms and impairments.