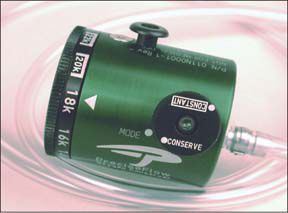 No one would ever mistake owning a light airplane for a riot of efficiency. Fuel tops the lists of resources we wish we could get more out of, but owners who use oxygen may wonder if even half of what they buy makes it into their lungs. Traditionally, light aircraft oxygen systems constant flow the stuff near your nose or mouth and what you dont breath leaks uselessly into the cabin.

The better way is oxygen conserving cannulas and, more recently, purpose-made oxygen conservers that apply some intelligence to how oxygen is flowed into a mask or cannula. Essentially, oxygen conservers are delicate valves that sense when youre about to inhale, flow or pulse the oxygen, then shut it off when youre exhaling, eliminating waste.

In that regard, theyre more efficient than constant-flow systems. The idea of dedicated conservers appeared in the late 1990s with sophisticated electronic devices from Mountain High E & S Co., which is now into its third generation of conserving products. Recently, Precise Flight introduced its own conserver, a mechanical design for use with portable or built-in oxygen systems.

For this report, we tested Precise Flights $395 PreciseFlow and Mountain Highs new O2D2 pulse-demand conserver, which sells for $800 in a kit that includes two cannulas and two masks. Although both purport to perform the same task, they do so by different means.

Hardware
Mountain Highs O2D2 is contained in a small plastic box measuring 3 3/4 by 3 by 1 1/4-inch thick. On top are three ports, two quick disconnects for pilot and co-pilot oxygen cannulas or masks and a third for oxygen input from either a portable or onboard oxygen system. If the O2D2 is used with an onboard system, a stepdown pressure regulator is required in the supply line, which makes for some extra plumbing.

The O2D2s electronics can operate on either three AAA batteries housed behind a door in the back of the device or on ships power, through a voltage regulator supplied by Mountain High at an additional cost of $25. The only control on the device is a pushbutton toggle near the inlets for selecting various modes of operation or switching the device off. Connecting the conserver is simple, but results in quite a bit of clutter, with hoses coiled up and bound to tangle headset cords, trim wheels and other snags. The solution is semi-permanent installation, with the device Velcrod or strapped out of the way and hoses carefully tiewrapped. Otherwise the nuisance factor is high.

The O2D2 has a number of operating modes. The N mode for normal, for example, automatically senses altitude and provides the appropriate oxygen flow. To enrichen the flow, you can manually override the altitude sensing by commanding oxygen flow equivalent to the sensed altitude plus 5000 through 20,000 feet in 5000-foot increments. A mode called R/M flows the maximum oxygen available, regardless of altitude, but its still not continuous, so the device continues to conserve, allowing 25 to 30 pulsed inspirations per minute, variable by altitude. Duration of the pulse also varies.

The O2D2 senses inhalation electronically through a conventional cannula and has small momentary lights to conform the inhalation and oxygen flow cycle. It also has an apnea alarm, which sounds if you stop breathing for 45 seconds or remove the cannula.

Precise Flights PreciseFlow follows a different design strategy, being entirely mechanical, with the guts housed inside a green anodized cylinder 1 7/8 inches in diameter and 2 inches high. As with the Mountain High product, there are three ports, one for oxygen input and two for a dual lumen cannula-essentially a conventional cannula with two channels, one of which is used to sense the inhalation pressure through a delicate diaphragm which then opens oxygen flow briefly. When the inhalation pressure ceases, so does the flow. But unlike the O2D2, the PreciseFlow doesnt time the pulse, but allows flow to continue as long as you inhale.

The PreciseFlow has two modes, continuous and conserve. Each mode allows manual selection of altitude, plus a max flow selection called THP or therapeutic, which appears to be equivalent to Mountain Highs R/M mode, but with continuous flow.

With a built-in system, the PreciseFlow also requires a pressure reducer. We found Precise Flights solution to this more elegant than Mountain Highs, with a small, unobtrusive inline pressure reducer rather than Mountain Highs larger valve-type reducer. The PreciseFlow system also has an inline flow sensor, a tiny green cylinder that toggles into view inside a clear window to confirm oxygen flow on inhalation.

How We Tested
Heres whats important: Do the devices flow less oxygen and oxygenate as effectively as conventional systems do? The answer to both questions is a definite yes. To measure flow, we used an Aalborg mass flow meter calibrated in liters of oxygen and installed it in the high pressure side of the system.We measured oxygenation with a Nonin FlightStat pulse oximeter at altitudes between 12,500 and 15,500 feet on several flights and compared our data against a constant flow system using oxygen-conserving cannulas.

Worth noting is that oxygenation, measured in SpO2, is not a meaningful value for every person. For instance, some pilots may feel alert at an SpO2 of 90 percent while others may feel mild hypoxia. Some can barely achieve 90 percent SpO2 when breathing oxygen, but have no overt hypoxic symptoms.

We found that both systems were quite capable of delivering oxygenation into the low to mid-90s SpO2, as long as the test subject pays attention to breathing technique. Thats also true when using traditional free-flow oxygen-conserving cannulas.

We noted that both devices tend toward the stingy when doling out the O2, which is, of course, their reason for being. For example, when the O2D2 was set in the N mode, the best we could manage was SpO2 in the high 80s rather than the 90 percent we would consider minimum. Setting the device to bump up flow for an altitude 5000 feet higher than sensed altitude corrected this, as did setting it to the R/M mode.

The PreciseFlow behaved similarly. When set at 14,000 feet at a pressure altitude of 14,500 feet, it delivered lower oxygenation than we wanted. Setting it at 16,000 or 18,000 feet addressed this. What about flow? This proved trickier to nail down than we imagined. Our mass flow meter wasnt equipped with a totalizer so we estimated usage based on time of peak flow.However, both conservers pulsed quickly-less than a second of duration for the O2D2-so obtaining an accurate reading was difficult.

Based on timing the peak flows in surface tests, we found that an Oximizer cannula flowed about .4 LPM when set for 12,500 feet while we would estimate the PreciseFlow flowed about a quarter of that. Because it electronically chops the pulse and doesnt respond to longer inhalations, the O2D2 flowed a bit less.

We would estimate that at typical settings likely to oxygenate at 90 percent SpO2 or better, both of these devices will use a quarter to half the oxygen required by an oxygen-conserving cannulas. While Mountain High confirms these numbers, they also point at that the higher you fly, the less efficient conservers will be. At 25,000 feet, for instance, the O2D2 will about double oxygen duration. One cautionary note: Actual performance may vary widely due to altitude and breathing habits. If you take long deep breathes, the PreciseFlow wont save as much as the O2D2, because the pulse isnt timed.

Conclusion
Were not easily impressed by gadgets, but well make an exception for these two devices. We liked their design and performance. But should you buy one and, if so, which one? If you use oxygen only occasionally, were not sure their benefit is worth either the cost or cockpit hassle factor.

But if you burn through a lot of O2 in frequent flights into the teens and higher, a conserver is a good investment. Its not so much that it will save money on oxygen, although it will, but rather the convenience factor. How often have you arrived at the end of a high-altitude flight with an empty cylinder only to find oxygen unavailable at the destination? A conserver could very well allow four or five such trips without a refill.

Of the two, we lean toward the PreciseFlight for occasional single-pilot use while the Mountain High strikes us as a better choice for two users. Two PreciseFlows cost as much as the O2D2, but once the O2D2s plumbing is in place, adding the second user doesnt add much clutter. Further, the O2D2 comes with accessories and a small carrying bag to keep track of the bits and pieces.