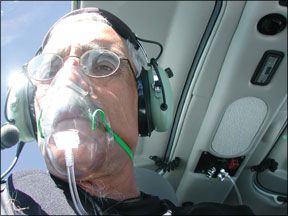 ink that another word for hypoxia ought to be denial or, at the very least, the phrase “false sense of well-being” should morph to “self-delusion.” In the aviation press, we have beaten the hypoxia topic to a pink pulp, because it lends itself so readily to the pointing of a boney finger at the profoundly stupid things pilots sometimes do.

In this regard, hypoxia is the multi-headed beast-we can be dumb about ignoring

its dangers, dumb about ignoring training meant to mitigate the risk and really dumb when it actually happens. And how often is that? We dont really know, because even if an accident is caused by hypoxia, the post-mortem may offer only speculative conclusions. In many GA accidents, the true cause may drift downwind with the smoke from the wreckage simply because light aircraft forensics are so inadequate.

Half of knowing what to do about hypoxia is knowing when youve got it and two recent training programs purport to do just that. Both are essentially desktop technology, one limited to Flight Safety Internationals simulator-based training network, the other is a newer technology thats being marketed by Biomedtech Australia and is available through the U.S.-based AirCare Solutions. We reported on the FSI program in the February 2006 issue of The Aviation Consumer. We demod the Biomedtech program at the NBAA show in Atlanta in September.

Traditional altitude chamber training is supposed to indoctrinate pilots in the finer points of oxygen starvation and we think everyone should do at least one chamber ride. But chamber training tends to focus broadly on hypoxia-induced performance degradation rather than the hypoxic symptoms themselves.

If you cant get the round peg into the square hole and 96 minus 18 equals 16, you only know that you feel like crap for a lot of reasons and you probably have

multiple symptoms. But where it did it all start? What was the first symptom you noticed? In other words, if you can learn to recognize your own onset hypoxic symptoms, maybe you can act to correct the problem before you become too dysfunctional to act.

Thats the idea behind the ROB approach. It induces hypoxia through whats called reduced breathing through a purpose-built system that lowers the oxygen content to simulate the lower partial pressure of high altitude. That this is done at the surface without exposing the trainee to actual lower pressure has certain advantages.

First, its safer. As any chamber instructor will tell you, chamber rides arent risk free. Most include a rapid decompression profile plus breathing without supplemental oxygen for up to five minutes at 25,000 feet. Chamber instructors exposed to repeated decompressions have been known to develop nitrogen-bubble induced “hot spots” in their joints, a precursor of what divers know as decompression sickness or the bends. Further, loss of consciousness or convulsions are hardly unheard of in chambers and instructors have to be constantly alert for the worst. Fooling with hypoxia is nothing if not unpredictable.

As we reported in the February 2006 issue, FSIs training is a two-step program. It

begins with a classroom orientation session, a quick review of basic physiology and gas theory, leading into a focused discussion of hypoxia and its symptoms.

Next, seated in a parked simulator, the trainee dons a medical type mask and breathes a nitrogen-rich mixture to induce slow onset hypoxia. The initial onset symptoms are noted and, during a second session in a flying simulator, hypoxia is again induced, but at random. The pilot is supposed to sense the initial symptoms, initiate an immediate descent and don emergency oxygen. The intent is to get to breathable air and ask questions later.

Biomedtechs ROB works differently, although the principle is the same. Where the FSI system actually mixes gaseous nitrogen from bottles, the Biomedtech device reduces oxygen partial pressure electrically, without the need for bottles of either oxygen or nitrogen. The device is about the size of a desktop computer and works in conjunction with a computer which controls the reduced mixture and provides

the trainee with a computer-based, self-learning training session.

Where the FSI approach requires a classroom session, the Go2Altitude approach is self-guided and monitored. You complete the hypoxic theory prep-course at your own pace, learn the theory and go on to the practical exercise. The practical is also done at the desktop, with a medical-type mask, again with monitoring.

As the machine slowly climbs you to altitude by reducing the oxygen partial pressure, youre confronted with a series of moderately rigorous cognitive exercises on the touchscreen-capable computer.

For instance, heres a picture of flagman, facing you. Is the flag in his left hand or right hand? Quick, whats 14 minus 5? How quickly you correctly perform pattern analysis, mental transposition and head math is a good metric for evolving hypoxia. The results of this exercise are monitored with a pulse oximeter, timing for each exercise and even a video of your facial reactions. All of this is burned into a CD for future review and reference.

To close the Go2altitude profile, youre given a list of symptoms and asked what you felt. As with the FSI program, the intent is to make your own checksheet of personal symptoms so youll be able to detect the onset of hypoxia early enough to do something about it.

In our view, both of these programs are on the right track and both are more practical, more valuable and more accessible than a chamber ride. If we could do both the chamber and an ROB profile, we would, but if we could pick only one, the ROB is superior. A chamber ride-lots of noise, oxygen masks, decompression fog-hits a small nail with an enormous hammer, while the ROB method subtly probes for that which you most need to know: Am I hypoxic? How do I know it? And what do I do about it?

Still, neither of the ROB systems is perfect, in our view. The FSI program costs $1000, making it expensive and somewhat hard to get at for the unwashed masses. FSI can, however, reduce the price for groups.

The AirCare/Biomedtech approach is superior in some ways because it quantifies performance with graphs and, if repeated-it really should be periodic training-you should be able to absolutely nail your early-onset hypoxic symptoms. AirCare hasnt established prices yet but as Biomedtech expands its North American marketing efforts, expect to see it eventually show up at a training facility near you.