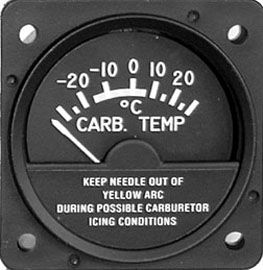 Whether due to dumb luck or good design, most of us will never suffer an inflight engine failure. But many of us have, or will, come close in the form of carburetor icing, a hazard that has troubled piston-engine aircraft almost since the dawn of flight.

Thats because in addition to being efficient atomizers of fuel, carburetors are also nifty little refrigerators that chill the incoming induction air, wring the moisture out and condense and then freeze it on the surface of the throttle body. Accumulate enough ice in the carburetor and the engine will stop as surely as if youve run out gas. The curative (and preventative) measure, of course, is carburetor heat. Just pull it on and all is well, except that carb heat robs power, richens the mixture and routes unfiltered air into the engine. To address this dilemma, two gadgets inhabit the market: Carb ice detectors and carb temperature gauges.

Both go to the same place, that being that theyre aimed at predicting or detecting ice as or before it forms so that carb heat can be applied as its needed, rather than preventatively when its not. Theres no competition in this field; just two gadgets that purport to solve the problem in different ways.

Iceman Ice Detector
If there were some way to look inside the throat of the carburetor and actually see ice beginning to accumulate, you could pull on the heat and get rid of it before it became a problem. Thats exactly the operating principle of the Iceman Carburetor Ice Detector.

Drawing power from the aircraft bus, it employs a hollow brass probe which protrudes through the carburetor body and into the carburetor throat. The probe-less than two inches long-has oval cutouts on each side.

Situated within the base of the probe, an LED generates a super-bright beam of light, which travels the length of the probe and impacts a phototransistor within the tip.

As long as this beam of light is unbroken, theres no ice and no cockpit warning. However, when ice accumulates, it builds within the oval cutouts, quickly interrupting the beam of light. This triggers an 80db horn and a red light on a panel-mounted control unit.

The pilot-now that the horn has gotten his attention-applies carburetor heat, then (so that he can think) silences the horn by depressing a normally centered test/reset toggle switch on the control unit, down into the reset position. With the horn silenced, the red light remains illuminated until the ice has been melted away.

The panel-mounted control unit has three controls: An on/off switch, a sensitivity adjustment knob and a test/reset switch. Additionally, theres the horn port and the warning light. Unlike the somewhat simpler carburetor temperature gauge, the Iceman requires a little operating savvy.

After starting the engine, the unit is switched on. Then, the sensitivity knob is rotated counterclockwise to the maximum sensitivity position. This will trigger the horn and illuminate the light.

Then, the test/reset toggle is depressed to the reset position to silence the horn and-for now-the light is ignored. In addition to testing carburetor heat during the engine run up, full heat is applied for 30 seconds to assure the absence of carburetor ice.

Then, the sensitivity adjustment knob is rotated clockwise until the warning light just goes out. Now, the probe is hair-triggered for ice detection and ready for flight.

Inflight Test
Testing the system in flight is accomplished by moving the test/reset switch up into the test position. This will trigger the horn and illuminate the light. Releasing the switch to its normally centered position will extinguish the light and the horn will continue to blare. Depressing the switch down into the reset position will silence the horn.

This test feature enables the pilot to confirm that the system is operating, without disturbing the basic sensitivity setting, which would require that the knob be readjusted.

One quirk of this design is that as flight hours accumulate, so will a film of fuel and oil on the probe. As this film builds up, the sensitivity adjustment knob must be rotated to ever increasing clockwise positions-sending more current to the LED, which increases the intensity of the light beam in order to extinguish the warning light prior to takeoff. According to the manufacturer, this doesnt compromise the sensitivity of the system. Eventually, the knob may have to be rotated to the full clockwise position to make the light go out. At that point, the probe will have to be removed and-according to the flight manual-cleaned with lead-free gasoline.

We werent able to determine how many flight hours can pass before probe fouling becomes a problem but Iceman recommends cleaning the probe once a year. Obviously, it should be added as an annual inspection item.

If you operate out of a dirt strip or your engine is spraying oil into an induction leak, the probe-along with everything else-will require cleaning more often.

Installation
Installing the system doesnt require removing the carburetor if the model in question has been pre-drilled, tapped and fitted with a brass plug where the idler jets were drilled during manufacture.

This plug is simply removed and the probe threaded into place; shims may be required for proper alignment. Otherwise, the carburetor will have to be removed, drilled, tapped, remounted and re-rigged.

Next, the control unit must be mounted in the instrument panel, preferably within the pilots field of vision, because once the warning horn is silenced, the warning light should be monitored.

As with the probe, mounting the control unit is simplified and less costly when an existing hole can be used. The installation instructions call for drilling a 9/16-inch hole through the firewall and fitting it with a grommet supplied with the kit, then routing the leads through it. However, as with the instrument and the carburetor, existing holes save time and money. The control units red power lead is tied into the main, rather than the avionics bus (this is an engine instrument), and a ground is secured with the black lead.

In addition, all electrical and avionics equipment must be powered up to check the audio system for inductive interference that might have been introduced by the ice detection system. Iceman Aviation Supplies estimates two hours of labor, which sounds reasonable if your carburetor, instrument panel and firewall have existing holes for the probe, control unit, and leads respectively. Otherwise, we think this is far too optimistic and would plan on at least four to six hours of labor.

This system is applicable to both 12- and 24-volt electrical systems, but is only approved with Marvel Schebler carburetors. However, unless youre tooling around in a Beech 18 with a brace of Bendix-Strombergs, the STC for your carburetor should be on the list.

There are two types of control units for the Iceman, standard and SE for sound enhanced. It has a headset interface for the warning horn while the standard unit doesnt. The standard panel-mounted control unit is $349 while the SE version sells for $389. Both control units use the same model probe, which costs $60. Iceman guarantees its ice detection system unconditionally for one year, parts and labor included.

Mid-Continents Temp Gauge
Rather than detecting the ice itself, Mid-Continents instrument alerts to the conditions where ice is possible by measuring the air temperature in the carb throat.

It also operates off the main bus and consists of a probe in the carburetor, a display on the panel and leads routed through the firewall, which tie the two together. The probe is installed in exactly the same place as the Iceman product, after removing the same brass plug-or, where required, using the same 7/32-inch drill and 1/4 X 28 tap, to create a hole. For estimating shop labor costs, these two systems are essentially identical, in our estimation. So, whats the difference?

The carburetor ice detection system detects ice and warns you. You either have an ice warning or you dont. When you do, the response is always the same; apply full carburetor heat-quickly-and lean the mixture.

Then, after the warning light blinks out, close the carburetor heat and restore the mixture, although perhaps not completely, choosing to continue flight at a leaner setting than before.

You may be in icing danger or you may not; its a function of relative humidity and temperature. Seeing the needle within the yellow range on a bone-dry day requires no immediate reaction. You may choose to apply partial carburetor heat to enhance fuel vaporization, thus improving mixture distribution and enabling you to lean a little more aggressively. But if the air is dry, ice is unlikely.

Of course, if the day is wet and the air is saturated, you had better react with carb heat as soon as possible to get the needle out of caution range.

This system is applicable to both 12- and 28-volt electrical systems, and Bendix-Stromberg carburetors-Beech 18 owners take notice. The cost of the panel-mounted air temperature display is $390 while the model B-5 probe is $235. Kits are available for $595. Mid-Continent offers a one-year limited warranty.

Rental pilots-and their flight instructors-often have a poor understanding of engine management and seaplanes on the surface of cold water ice up in a treacherously sneaky way. Agricultural pilots making repeated low passes are too busy to actively manage carburetor air temperature.

Conversely, pilots with a sound understanding of piston engine management would, in our estimation, do fine with Mid-Continents temperature gauge. By introducing carburetor air temperature, you wont be guessing about the possibility of ice. Or at least youll be guessing less, since youll know one critical element in the icing equation.

Cost/valuewise, these two devices are nearly similar, in our estimation. Depending on the model, the Iceman is up to $150 cheaper but it requires tweaking to operate and maintain. Mid-Continents temperature gauge is largely set-and-forget, but does require some interpretation.

John Sharwarko is a commercial pilot and graduate of Embry-Riddle. He lives in York, Pennsylvania.