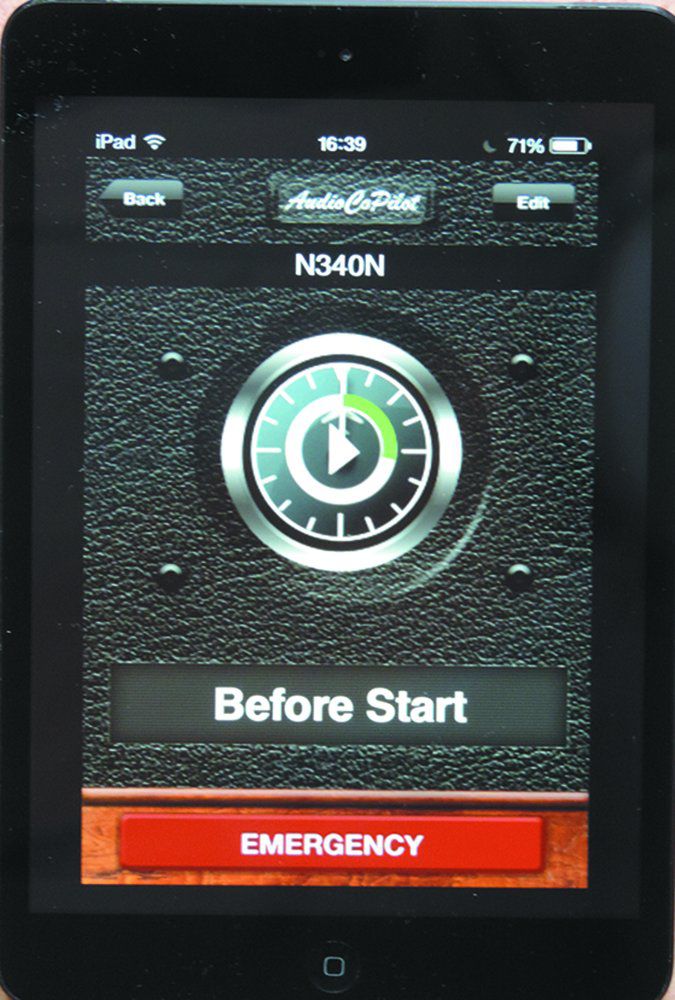 Aircraft manufacturers provide checklists in their POH/AFMs and we’ve dutifully copied those into separate—usually laminated—checklists for use in the airplane. Various third parties, including sureCheck and CheckMate, have attempted to improve on that physical format by taking much of the same information and condensing it to a few dense pages.

Now we’ve got various tablet and EFB checklist apps, plus utilities in our panel-mount devices. Instead of laminated paper, the same static information is available on a high-quality screen, but the operating paradigm is unchanged: Read the challenge; read the response; repeat. (Although, some apps allow a checklist item to be actually checked off, making it easier to keep your place.)

Can’t we do better these days? To find out, we gathered several checklist-purposed tablet apps and gave them a try.

The difference is likely convenience and workload. On the ground, the pace is slower. In the air, you must stay ahead of the airplane, ATC and the weather. As a result, checklists often lose priority. In our view, today’s paper and electronic checklists simply require too much attention. Our gaze is diverted to paper or a tablet in our lap or possibly to a big-screen device on the panel, but that could be well out of our normal instrument scan.

Additionally, we think written checklists require far too much attention. It takes mindshare we often don’t have to read and interpret a line on paper or on a screen, and think it through to confirm it’s done. Add the buttonology required of some devices, and our goal becomes getting through the checklist, not the actual checking that’s supposed to be happening.

That’s fine, but we don’t all have a copilot. Perhaps technology can come to the rescue. With that in mind, we have a prescription for the perfect electronic checklist.

Manufacturers’ checklists are fine to learn a new type, but they’re often too lengthy for practical use. The best checklist is one you write yourself, based on your experience and background in the aircraft type you’re flying. The app should let you write your own. We’d like the program to operate in the background of the host device. Our reasoning is simple: We don’t want to dedicate another device for the checklist app. Instead, we want to run our favorite inflight app in the foreground and still have access to the checklist running simultaneously in the background. While we didn’t find any such checklist apps, advanced iOS users might be able to make this work.

Perhaps most important, normal operations would be entirely by voice. The device should tie in to the pilot’s headset (with Bluetooth or via the audio panel) and listen for a command like, “Checklist: After Takeoff.” It would then find the checklist and read the first challenge, “Flaps.” It would wait for the pilot to respond “Up” and would read the next item, “Fuel Pump.” It would wait for the correct response, “Off,” and so on. When the checklist is complete, it would say so and go back to listening for the next checklist command. This way, a checklist application is as unobtrusive as possible. It’s there and it will walk you through the checklist items, but only at the time of your choosing and in the pace you set with your responses. With that checklist app, we think checklist use in the air—and thus safety—would be improved.

Do any apps behave as we’ve described? No, but we found three that are somewhat promising.

Since it only works on Android, we think Voice-Check is at a disadvantage. Still, we tried it on a Samsung Galaxy tablet and liked its simplicity.

Voice-Check speaks the checklist challenge in a somewhat metallic computerized voice and waits for your response. It has voice recognition of a small number of responses, and using it without being connected to the internet requires Android version 4.1 or later and some fine tuning. After a frustrating amount of fiddling, we never achieved reliable speech recognition of our responses.

You can turn the talk and listen functions on or off, plus the app has an extensive list of emergency checklists—from overvoltage conditions to electrical fire. It has an editable V-speed section and a dedicated note-taking section for editing items.

Voice-Check is the most expensive of the three checklist apps we evaluated. It’s free for the first seven days (the others should have an evaluation period), but uses a $2.29 monthly subscription model.

Think of AudioCoPilot as little more than a $9.99 audio note taker for iOS that’s optimized for checklists. There are no canned checklists; you make your own. You start by adding an aircraft, optionally even with a photograph. You add each checklist by typing its name, then within that checklist, you type in each item and record what you want it to say. That’s it.

In use, you select the aircraft and it offers you the first checklist in order. You push play, and it starts playing the items as you recorded them. It’ll play each item in that checklist until the end, and sequence to the next checklist and wait for you to tap play again. You can pause at any time or access checklists out of order.

At the bottom of the screen, there’s an “Emergency” button. Tap that to go directly to a menu of emergency checklist procedures that you created as before. Tap the one you want and it’s read to you in the normal fashion. However, at this point, once that checklist is finished, button presses seemed to usually exit (crash?) the program rather than return you to normal procedures.

Overall, we liked AudioCoPilot. It’s inexpensive and quite straightforward in its operation. It’s still a little rough around the edges and could benefit from some refinement. For instance, when running, the checklist text you entered should be but is not visible. Then there’s that navigation oddity in the emergency checklists.

smartCHECK is the newest of the apps we found. It came to us a few months back via a media announcement, suggesting to us they’re serious about making this work and gaining market for it.

Checklists are grouped into phases of flight such as ground, after takeoff, etc. that automatically sequence or are directly accessed. Within each group, individual checklists are shown as tiles further subgrouped and color-coded into normal, abnormal and emergency. Touch a tile and the checklist is run.

Individual checklist items may be edited in the app, but in this version you cannot add airplanes, groups or checklists within a group. If an available aircraft checklist structure comes close enough to your needs that you can merely edit the items, you’re in luck. If none do, you’re out of luck until a planned upgrade provides the user ability to create new checklists.

We think navigation in smart-CHECK is superior to the others, but the behavior is still a bit quirky in places. For instance, if editing a checklist item, your edits might not take when it’s read. Instead, you must delete the item and add a new one. In time and with revisions, this might well become the best checklist app, and is quite usable today if your aircraft fits within the framework of the available six.

It’s often said that users of panel-mounted GPS navigators use only 20 percent of the available functions. If that’s the case, then the remaining 80 percent of the unused functionality contains a checklist utility.

Garmin’s integrated checklists have been standard in systems dating back to first-gen GNS430 and GNS530 navigators and early G1000 suites. The checklist utilities in the current GTN750 and GTN650 navigators are the most advanced yet, but don’t have a voice function—even with Garmin’s latest voice-activated audio panels.

In the GTN, checklists are created using the Garmin Checklist Editor software that’s available online and stored as checklist files on the navigator’s datacard. You’ll need software version 5.10 or higher. Accessing and using the checklist is easy. Touch the Checklists key to launch the stored checklists, while the Menu key calls up checklists from a “group”—normal or emergency, for example.

Avidyne, in its IFD540/550 and IFD440 navigators, included the ability to create and store up to nine custom checklists, each with up to 50 steps and as many as 30 characters long. Once you’ve created and named a checklist (all done in the navigator), it is simply recalled from the checklist directory. To run through it, either touch a highlighted step or push the IFD bezel knob until the step turns green and a checkmark appears.

As much as we think checklists have improved since they appeared in early-gen navigators, we don’t see them as workload reducers, especially in single-box installations where you have to hop menus. As with app-based checklists, what we really want is speech recognition. Avidyne hinted that could be coming as a function of its new app.

On the surface, Talking Checklist Pro looked promising. From its description, this free iOS app seems somewhat similar to smartCHECK, but many reviews in the app store talked about it crashing when editing a checklist.

Although use of a provided checklist operated simply and reasonably, it also crashed for us when we tried to edit a checklist. When it didn’t crash, we got hopelessly lost trying to make our edits. We went to the developer’s webpage and the app isn’t even mentioned, so we weren’t able to find any instructions or other guidance. There was even mention of a video tutorial on YouTube, but we couldn’t find it. Our takeaway is the app might offer some capability if you’re patient enough with it. But you get these apps to make cockpit life easier—not more complicated.

Do any of these dedicated checklist apps behave as we would like them to? No, but Voice-Check, smartCHECK and AudioCoPilot are three that are somewhat promising. Voice-Check does have full voice control, but it’s only available on Android. The other two will talk, but not listen.

All these apps use the platform’s built-in Bluetooth to communicate with your headset, making a headset or audio panel with Bluetooth a near requirement (although you could wear an earbud in one ear with a regular over-the-ear headset). We suggest you experiment on the ground before going flying.

The app world is fragmented and entrepreneurial. That’s a polite way of saying most of the apps are written by one or two people, usually as a fun off-to-the-side project. If the app proves popular—few do—a real company might emerge to provide support and enhancement. If it doesn’t, well, the app can be orphaned or never see any enhancements.

We feel that an electronic text presentation of a printed checklist simply puts the same limitations into a modern format, without any real advantage. A talking checklist is required.

We had sufficient trouble getting Voice-Check to work properly, so we really can’t recommend it. If your aircraft fits within the framework of one of the six aircraft available for sureCHECK, we’d probably choose that one, although the simplicity and versatility of AudioCoPilot is quite compelling as well.